Is peace possible after the Israeli elections? 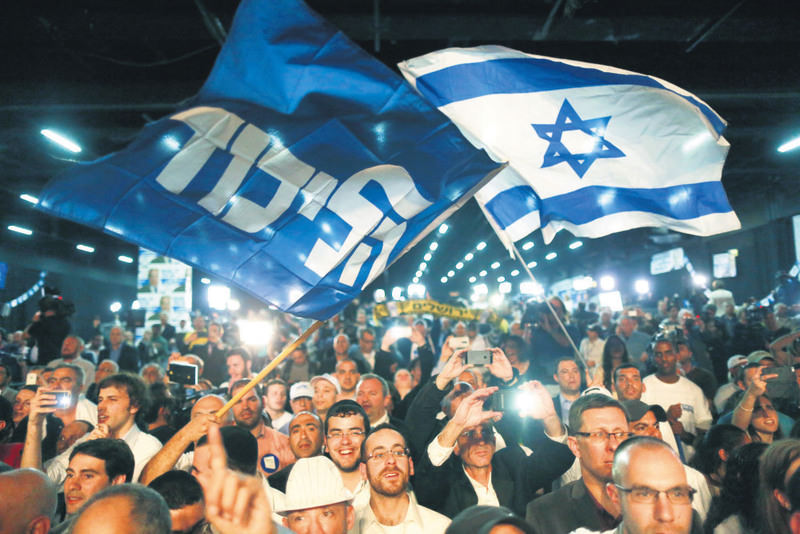 If Netanyahu's ultimate objective is the security of Israel and the safety of its citizens, then a fair and sustainable peace with the Palestinians is the only way to achieve it

Israeli Prime Minister Benjamin Netanyahu surprised even the most astute observers of Israeli politics by winning a third term in office last week. Many see his re-election as a strategic loss for Israel. The opponents include some of the most prominent members of Israeli political and intelligence community, including Meir Dagan, the former head of Mossad. Netanyahu's campaign messages and scare tactics, bordering on racism, drove the ire of major capitals including Washington. But despite his politics of fear and intimidation, can Netanyahu be the hawk who would make the peace? Sholomo Ben-Ami notes that Netanyahu based his campaign on a politics of fear and resorted to an assortment of scare tactics. His chief tools include the Arab citizens of Israel at home and the nuclear talks with Iran abroad. He laid bare his discriminatory view of Arabs when he told his supporters that the "Arabs were voting in droves" and the leftist parties were "bussing them to the polling stations." He was referring to Israel's Arab citizens who make up 20 percent of the population. Can you imagine a political leader in the U.S. or Europe calling on his supporters to be vigilant against black or Latino voters in the U.S. or Jewish or Turkish voters in Germany?

What does he propose instead? Rather than opting for a fair and sustainable peace, Netanyahu and his far-right cohorts want to expand the settlements, deepen the illegal and inhuman occupation of the Palestinian lands, oppress the Palestinians to the point where they will give up their struggle for freedom and equality, and play the "unwilling, anti-Israel and terrorist Palestinians" card to shape public opinion at home and abroad.

But history shows that continuing the occupation will never break the will of the Palestinian people for freedom and independence. Five decades of occupation and dispossession have created one of the worst forms of political and humanitarian catastrophes for the Palestinians and engulfed an entire region in conflict and war. But it has not stopped the Palestinian struggle for justice and equality.

Many observers point out that Netanyahu won an election victory but overplayed his hand at the international scene. His move to team up with Obama's Republican opponents on the Iranian nuclear issue will further worsen an already troubled relationship with the Obama administration. Commenting in a Huffington Post interview after the Israeli elections, President Obama expressed for the first time his discomfort and disappointment. In regards to Netanyahu's discriminatory remarks about Arab voters, he said that "we indicated that that kind of rhetoric was contrary to what is the best of Israel's traditions. ... Israeli democracy has been premised on everybody in the country being treated equally and fairly." Obama rightly points out that if equality and fairness are lost, then this will start "to erode the meaning of democracy in the country."

In spite of all these, can Netanyahu be the hawk that would eventually make peace? As unlikely and counter-intuitive as it seems, there might be a chance if the new Israeli government invests in peace rather than conflict. With his right-wing credentials fully established, Mr. Netanyahu can take the bold step towards peace, end the occupation, recognize the Palestinian's right to freedom, dignity and independence, allow the Palestinian state and normalize relations with the Arab and Islamic world. If Netanyahu's ultimate objective is the security of Israel and the safety of its citizens, then a fair and sustainable peace with the Palestinians is the only way to achieve it. Ending settlements and withdrawing to the pre-1967 borders, as included in every major peace proposal since the 1990s including the Arab Peace Initiative led by Saudi Arabia, will go a long way in ending the decades-long conflict between Israelis and Palestinians. Given the dangerous shift towards the far-right in Israel under Mr. Netanyahu, this is probably wishful thinking. With a new mandate, Netanyahu may even harden his anti-peace stance. But this will only bring more misery and destruction to an already troubled region.

Presidential spokesperson for the Republic of Turkey
Last Update: Mar 24, 2015 10:51 am
RELATED TOPICS