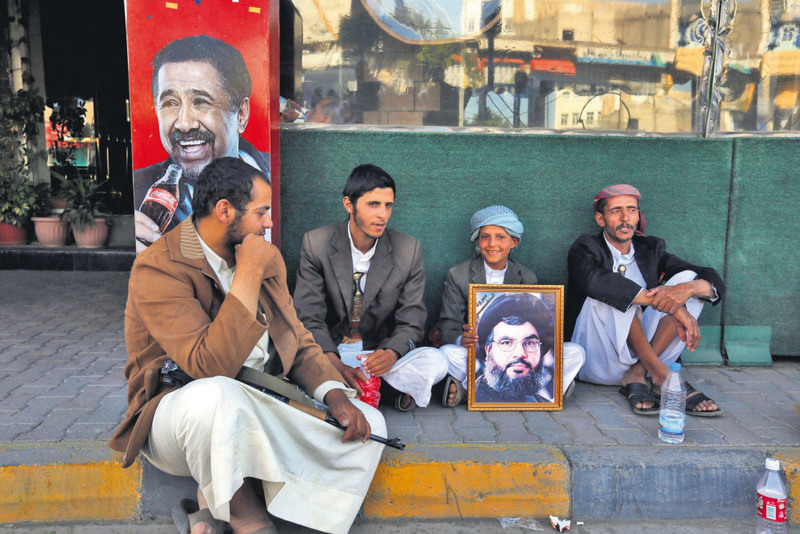 A young Yemeni holds a picture of Hezbollah leader, Hassan Nasrallah, while waiting to participate in a rally demanding an end to Saudi-led military operations on Houthis and their allies, in Sana'a, Yemen.
by İbrahim Kalın Apr 29, 2015 12:00 am

What rules and principles determine the nature of the current international order today? Given the turbulence and insecurity in the world, one may ask if there are any principles at all that guide the behavior of nations in their exercise of power. A key concept of both the theory and practice of international relations is national interest. It is not values, virtue or brotherhood, the critics assert, that shape relations between nations. It is the interest of a group of people that determine the nature of relations between and among collective units of human beings. This notion of national interest has its merits. Nations do seek to secure their own interest in their dealings with other nations. But this is a concept that is too simplistic and somewhat reductionist to explain the highly complex and interconnected nature of world order. What counts as national interest cannot always be explained solely in terms of cold-blooded real-politik. Many other factors shape it.

Security is a case in point. All nations seek security for themselves. This is a natural instinct for both individual human beings and their collective assemblies. To ensure security, nations can go to war when they feel threatened by others. They can kill when they think it is the only way to eliminate an imminent threat. From the Peloponnesian wars between the ancients Greeks and Persians to the two World Wars in the 20th century, many wars have been fought to provide security for one's nation and its existence. Some have been fought against imperialist powers seeking dominance over others. Paradoxically, imperialist powers have sought to justify their expansionism through notions of security and self-proclaimed legitimacy. But security-through-war has always been costly, and wars have ended up undermining the security of nations they purport to protect. So, war cannot be the only way to ensure national security. After hundreds of brutal wars that have wrought the greatest man-made calamities to human beings, many have come to conclude that peace is also a way to ensure one's security and by derivation national interest. National interest entails instilling values of peace and harmony, establishing alliances with like-minded nations, and creating conditions that prevent conflict in the first place.

This is where values and principles become a key component of any notion of national interest. It is possible to maintain an order in which self-restraint, legitimacy, justice, freedom and respect for others regulate relations of power between and among nations. Protecting one's own national interest requires respect for others and maintaining openness to them. If the checkered and bloody history of international relations tells us anything, it is the cost of conflict and the benefits of peace based on justice, equilibrium and legitimacy. Since the ancient times, each attempt to establish an international order through war has failed sooner or later. They have brought misery and calamity rather than security, freedom and prosperity. The wars that we are seeing today from Ukraine to Syria, Libya and Yemen are not any different in essence. Their role in creating a sustainable regional order, if this is what its main actors have in mind, will be limited if not total failure and even disaster.

Many hold that war is the only way to ensure a nation's security and self-interest. Otto von Bismarck, one of the giants of the 19th century European politics, was a cold-blooded "realist" and saw no place for mutuality, peace or reciprocity in global politics. As he put it, "the only healthy basis of policy for a great power ... is egotism and not romanticism... Gratitude and confidence will not bring a single man into the field on our side; only fear will do that ..." Given the history of bloody conflicts, Bismarck has a point. War is sometimes inevitable. But it cannot by itself be a principle to ensure a nation's security and legitimacy. We know too well what happened in Europe from the time of Bismarck to the Holocaust, Rwanda, Bosnia and the rest.

In an irony of history, Bismarck's "strategic egotism" is countered by the principle of continuity and steadfastness as defended by the Austrian Foreign Minister Klemens von Matternich, who led the Austrian delegation in the Congress of Vienna in 1814. Against the uncertainties of his times, Matternich famously said that "where everything is tottering, it is above all necessary that something, no matter what, remain steadfast so that the lost can find a connection and the strayed a refuge." This statement coming from the Austrian Foreign Minister is rather ironic because Matternich has had his own share of wars in Europe. But his primary goal, to maintain a balance of power among European nations including Russia, was based on a proper understanding of power, equilibrium and legitimacy. No matter what the political ambitions and imperialist impulses of nations are, one needs a set of anchor points and principles to walk through turbulent times.

The lesson for us today is to recognize the importance of power equilibrium on regional and global levels so that we can properly define our notion of national interest to prevent war and conflict rather than create new ones.

Presidential spokesperson for the Republic of Turkey
Last Update: Apr 29, 2015 1:40 am
RELATED TOPICS