And Turkey goes to the polls 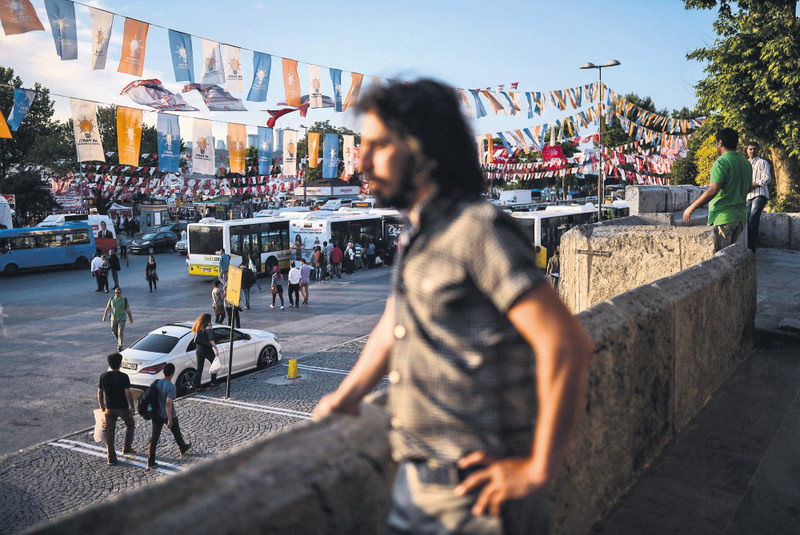 Beyond campaign slogans, election promises and newspaper headlines what voters say at the ballot box will determine the political landscape of the upcoming years

Turkish voters will go to the polls on Sunday. Political parties and independents ran fierce campaigns to gain the support of voters in this critical election. We will know the results by next week and they will have important consequences for Turkey's political and economic future, a new constitution, a presidential system and foreign policy. Turkey has internationally recognized free and fair elections. The level of participation in local and national elections is one of the highest in the world, averaging 80 percent 85 percent. Over 30 political parties and independents are currently contesting the 550 seats in Parliament. Political propaganda and campaigning is free to all in all parts of the country and in all languages and means. Independent observers, both individuals and institutions, have free access to every part of the country.

The Justice and Development Party (AK Party) stands to be the winner with a large margin. In its 13th year in power, it is the largest political party with the widest appeal, cutting across ethnic, religious and class boundaries. It owes its success to two main components. The first is the politics of services whereby successive AK Party governments have revamped the ailing Turkish economy; increased the annual gross domestic product (GDP); invested in health, education, energy, roads and airports and created millions of new jobs. Currently, Turkey is the sixth largest and the 17th largest economy in the world and will host the G20 summit this fall.

The second component of the AK Party's success has been its ability to address such long-standing political issues as military tutelage, the Kurdish issue, religious minorities and the relations between the government and people. Coupled with a proactive foreign policy, Turkey has fashioned a new self-perception and a new regional and global outlook. In 2004 and 2005, the AK Party revived Turkey's bid for EU membership, but since then the process has stalled due to internal EU disagreements, the Cyprus issue and the unfair blocking of chapters. Given this track record, the opposition parties have fallen behind the AK Party's performance in both areas. The AK Party has been able to reach out to the majority of ordinary citizens through its political identity of conservative democracy. This represents the new middle in Turkish politics. Other parties have been either on the left or the right of this middle now defined and occupied by the AK Party.The main opposition Republican People's Party (CHP) tried a new strategy this election. Putting aside its archaic discourse on Kemalism, secularism and state-based nationalism, it turned to what the AK Party does the best - services. It made promises for better pay for workers and the retired as well as creating new jobs. But its discourse of service politics does not seem to have reached beyond its traditional constituency. Out of power for decades, the CHP has very little to show in the way of evidence, and its municipalities are not known for any stellar performance. This is a major dilemma for a party that prides itself on being the founder of the Republic. It is also ironic that CHP, a member of the Socialist International, opposes welfare assistance the government provides to low-income and poor families.

The Nationalist Movement Party (MHP), which defines itself as the paragon of Turkish nationalism, performed as expected, trying but mostly falling short of blending service politics with identity politics. The MHP's appeal to a reified Turkish identity pits it against the rich tapestry of Turkish society in the 21st century. Its opposition to the Kurdish reconciliation process seems to have increased its support, but since it does not provide any alternative, it does not go beyond election polemics. The MHP's attacks on President Recep Tayyip Erdoğan are rather off the mark because many ordinary citizens see Erdoğan as serving the interests of the Turkish nation better than any other leader, including the MHP.

Finally we have the HDP, which entered the political arena under the wings of the outlawed PKK and remains under its tutelage. Going into the elections, anti-Erdoğan and anti-AK Party animus seems to have provided a new ground for the HDP. The international media's hype and romanticizing about the HDP has more to do with this anti-Erdoğan campaign than what the HDP actually has to offer.

The HDP allegedly seeks to become an all-Turkey party, that is, a political organization that goes beyond its self-declared Kurdish nationalism and embraces the country as a whole. But the HDP's claim rings rather hallow against the backdrop of its ties with the PKK, which basically controls the central decision-making process in the party. It is widely known that the HDP is not an independent political body and the main HDP figures do not hide it. Its election strategy to position itself as a non-PKK, non-Kurdish party may or may not have worked. But the reality is that the HDP is far from saving itself from the tutelage of the PKK command chain and the old fashioned Marxist-Leninist-cum-nationalist ideology. Furthermore, the HDP's election-time liberalism is likely to cause it serious internal problems after the elections. Conservative, religious Kurds and Turks have already denounced some of the HDP's campaign messages. We will see how each party has performed in the eyes of the voters. What the people will say matters more than any campaign slogan or newspaper headline.
Last Update: Jun 06, 2015 2:04 am