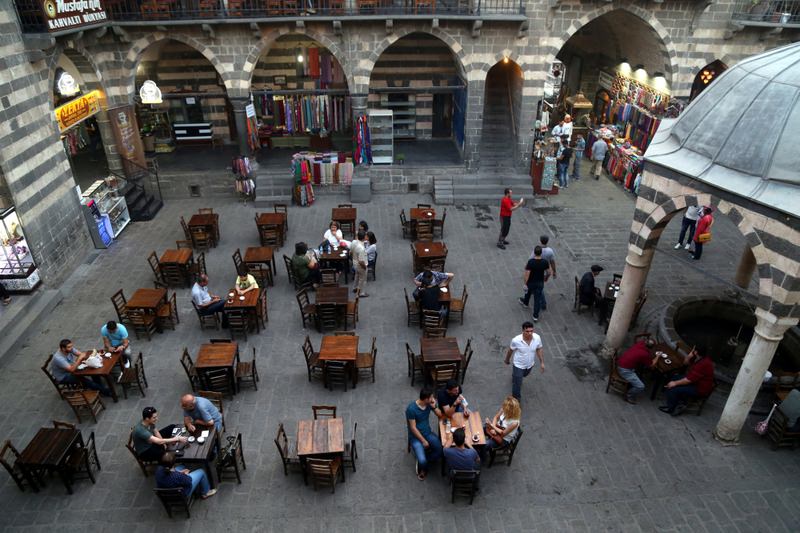 Citizens living in the predominantly Kurdish southeast of Turkey support the state's self-defense measures in the face of the PKK's increasing terrorist attacks.
by İbrahim Kalın Aug 22, 2015 12:00 am

While the reason for its terrorist attacks is to continue its presence regardless of the reconciliation process, the PKK tries to fool the world with the help and wish of the Western media through a fabricated story portraying it as fighting ISIS

Since the June 7 elections, the PKK has escalated its attacks on security officials and civilians in Turkey. Always looking for a pretext to delay its disarmament, the PKK is using the war in Syria to gain legitimacy in the eyes of the Western public. Unfortunately, prominent Western media outlets including the BBC, the Guardian, Reuters, Times, The New York Times and others are buying the PKK story and thus helping it with its dirty war.

As I have discussed here, the PKK rejected every opportunity to disarm over the last two-and-a-half years. Despite the calls by its imprisoned leader Abdullah Öcalan since March 2013 and despite the huge democratic and socio-economic measures taken by the Turkish government, the PKK and its affiliate organizations are lost in a self-edifying myth of "struggle for the people." What struggle is this? Against who? And for whom?

In its brutal and bloody history, the PKK has killed as many Kurds as Turks and others. It has executed dozens of Kurdish leaders, fought with Iraqi Kurds in the 1990s and oppressed Syrian Kurds since the outbreak of the Syrian war. It is recognized as a terrorist organization by the U.S., E.U. and other countries.

The Human Rights Watch released several reports detailing the use of child soldiers by the PKK's Syrian branch Democratic Union Party (PYD) in Syria. This is clearly in violation of the Geneva Conventions.

It has also reported on human rights violations and abuses in PYD-held areas.

After the PYD took Tal Abyad, it forced Arabs and Turkmens to migrate in order to change the demography in its favor. Furthermore, the PYD has long been suspected of having shady relations with the Assad regime.

As Daily Sabah columnist Hilal Kaplan notes, the PKK is using similar tactics in Turkey where it recruits minors under the age of 18. When the mothers of these children demanded their release from the PKK and its political wing, the Peoples' Democratic Party (HDP), all they received was reproach and humiliation peppered with foolish conspiracy theories.

The so-called "great humanity" of the PKK and its propaganda machines turn militant and brutal when it faces rational criticism. These simple facts receive little attention in the international media because it is busy trying to manufacture "virtuous terrorists" and "peace doves" out of the PKK.

The Western media's pro-PKK spin is all about the war in Syria and the fight against the Islamic State of Iraq and al-Sham (ISIS). The underlying assumption seems to be that just about anyone who claims to fight against ISIS is by definition a force of good. To sell the PKK to the Western audience, you need stories to show that it is giving a heroic fight against the barbarians. But embellishing bloody terrorists as peace lovers is always a perilous enterprise.

The self-perpetuating legend of the PKK fighting ISIS everywhere with heroic sacrifice is exaggerated to create a space of legitimacy and political maneuvering for the PKK.

This story is also a convenient distraction from the real horror story, which is the killing machine of the Assad regime and its unabated massacre of the Syrian people. Just last week, Syrian jet fighters bombed the neighborhood of Douma, northeast of the capital Damascus, killing over 100 civilians. The UN cited the possibility of war crimes. Yet we all know that none of these calls and investigations will stop the criminal Assad regime, which has killed over 300,000 of its own people, used chemical weapons and committed war crimes.

ISIS is a real menace and must be fought against without compromise. But it is politically and morally wrong to use ISIS as an excuse to devise and implement proxy policies in Syria and beyond. Just as the Syrian regime and its backers use ISIS as a pretext to keep the regime in Damascus, the PKK is now using it for its own political agenda. It cannot be allowed to fool the world. Those who lend support to the PKK ought to understand that they are becoming part of the PKK's dirty war.

Turkey maintains its principal position: While continuing political and economic reforms and seeking a peaceful resolution to the 30-year conflict, it is also fighting against PKK terrorism. Despite terrorist attacks by the PKK and its media spins, Turkey will maintain the right balance between freedom and democracy on the one hand and security and stability on the other.