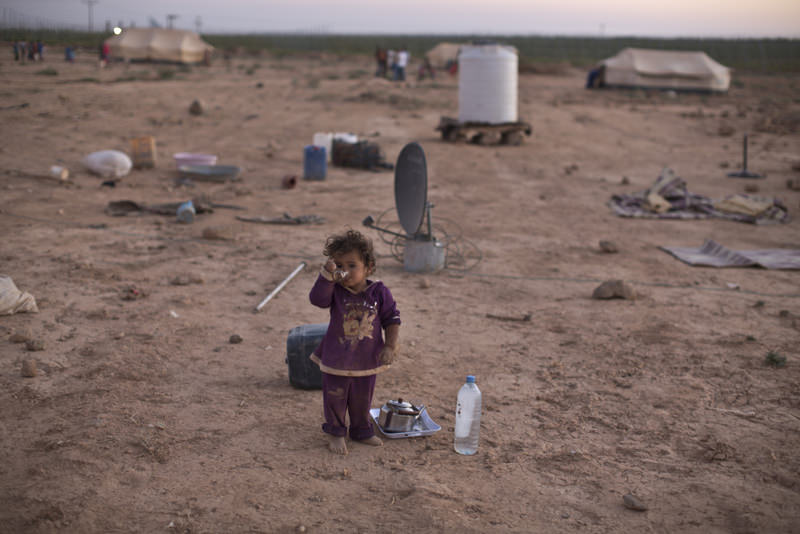 Syrian refugees don't think about their education, future or anything else but to survive another day.
by İbrahim Kalın Sep 01, 2015 12:00 am

In its fourth year, the Syrian war continues to unleash new levels of monstrosity. Three-hundred-thousand people have died and tens of thousands have been injured. Eleven million Syrians, half of the population, have left their homes. Four million have become refugees in other countries - the largest refugee crisis since World War II. The war crimes including the use of chemical weapons have gone unpunished. Red lines have been crossed. The Islamic State of Iraq and al-Sham (ISIS) has emerged as a deadly terrorist organization.

While U.N. Special Envoy Staffan De Mistura shuttles between capitals and opposition groups to broker a cease-fire, the international community, chiefly the U.N. Security Council has failed to stop the war and contain the growing refugee crisis. The sinking boats in the Mediterranean, dead children washed away to the shore and asylum seekers dying in container trucks on European soil have drawn temporary attention but failed to garner enough moral and political support to change the course of events. Once the horrible images of drowned children fade away, we will be back to the ongoing horror in Syria.

After four years of a criminal war, the general consensus is that a political settlement is the way to restoring peace and security in Syria. Given the Assad regime's brutality and politics of war, however, no political negotiation will yield results without changing the security dynamics on the ground. There is no magic formula to end the war immediately. But there is a piece of the puzzle that can save innocent lives and force the Assad regime to come to the negotiating table within the parameters of the Geneva I and II.

The piece is to establish a safe zone in northern Syria with a no-fly zone to protect it - a proposal Turkey made several years ago. The continuing atrocities of the Assad regime including the use of chemical weapons and barrel bombs as well as the expansion of the ISIS have made the safe zone proposal more relevant than ever.

Turkey is participating in the air campaign against ISIS targets. This will certainly help degrade ISIS's fighting power. But it will not be enough to defeat it. Nor will it save the Syrians from the Assad regime's killing machine. As long as the regime continues its brutal war, ISIS and others will find a breeding ground in Syria.

As a glimmer of hope, the idea of a safe zone for Syrian refugees and the Syrian opposition is gaining traction lately. Robert Ford, the former U.S. ambassador to Syria, wrote on March 9 that "Assad's ground and air forces have consistently targeted moderate armed groups fighting the Islamic State. If the administration wants these beleaguered fighters to be successful, it will face the question of expanding the U.S. air mission in Syria. Protecting them would require some kind of no-fly zone, a step the administration has long resisted."

On April 21, Republican and Democratic U.S. senators called on President Obama "to create and enforce humanitarian safe zones in Syria, amid international concerns about the dire conditions faced by millions of people displaced by the war."
The debate has now taken on a cross-Atlantic dimension with some Europeans supporting it. On July 9, Nicholas Burns and David Miliband noted that "the debate about a no-fly zone across Syria to protect civilians from the Assad government's deadly "barrel bombs" needs to move from slogans to details. Such zones can offer real protection (as was the case with the Iraqi Kurds in the 1990s), but a decision cannot be divorced from the wider imperative for progress toward a political settlement in Syria."

The comparison is not limited to the post-Halabja situation in Iraq under Saddam. Muhamed Sacirbey, a former foreign minister of Bosnia and Herzegovina and Najib Ghadbian, a special representative to the U.S. and U.N. for the Syrian Opposition, drew parallels between the wars in Bosnia and Syria and argued that "a Syrian no-fly zone will save lives and help end the conflict." They further noted that "the intervention in Bosnia saved lives. It dampened extremism. And it ultimately brought the conflict to an end. Intervention - in the form of a no-fly zone - could offer similar benefits in Syria by stopping what is now the leading killer of Syrian civilians: Assad's barrel bombs."

Former U.S. diplomat Frederic C. Hof notes that "if a broader aerial exclusion zone eliminates or complicates the ability of the Assad regime to drop barrel bombs on civilian residential areas outside of the "safe zone," lives will be saved and ISIL will be deprived of a major recruiting asset."

Establishing a no-fly zone is both a political necessity and moral duty. The practical complications invoked pale in comparison to the lives to be saved. As Anne-Marie Slaughter states, "by establishing a no-fly zone. The US and its partners would demonstrate to Assad that their patience has finally run out, and that they are prepared to defend Syrians within Syria. This, together with the knowledge that his army is weakening and the pool of new recruits is drying up, would force Assad to reconsider his long-term prospects and, most likely, force him to the negotiating table."

It is high time to realize that the ISIL threat will not be eliminated and the Syrian refugee crisis, now reaching European shores, will not be resolved until and unless a serious and concerted effort is made to stop Mr. Assad's bloody war.

Presidential spokesperson for the Republic of Turkey
Last Update: Jan 28, 2016 9:45 am
RELATED TOPICS