Syrian refugees: A crisis of politics and conscience 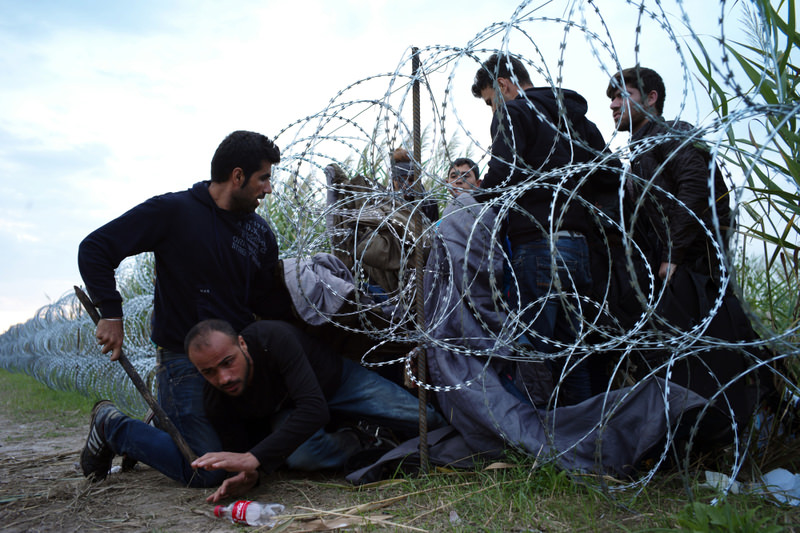 Many of the migrants flooding Europe to escape war are scrapping their true nationalities to improve their chances of asylum with many of them claiming to be Syrian.
by İbrahim Kalın Sep 08, 2015 12:00 am

Europe is faced with its largest refugee crisis since World War II. Thousands of men, women and children from Syria, Somalia, Afghanistan, Eritrea, Libya and other places are risking their lives to find safety outside war zones. Close to 3,000 refugees have already died in the Mediterranean this year alone, trying to go to Europe. In contrast to the claims to the contrary, this is not a problem of capacity or system in the EU countries; this is a crisis of political leadership and consciousness.

It took the heart-breaking picture of the dead body of the 3-year-old boy, Aylan Kurdi from Syria, to wake up Europe to the horrors of the war that the Syrians have been living with over the last four years. The world saw one horrible picture but thousands of others remain unseen and unheard of. They tell the shameful story of the failure of the global order to take care of the weak and poor across the globe.

After much precious time lost, European leaders are finally stepping up to the table. German Chancellor Angela Merkel is leading the way to deal with the crisis. She has already pledged to accept up to 800,000 refugees to Germany this year. France is stepping up its efforts; French President François Hollande spoke with Turkish President Recep Tayyip Erdoğan last week to coordinate aid efforts. German and French leaders called for a "unified EU response" to the crisis. European Commission President Jean-Claude Junker is urging EU leaders to take in more refugees. Under intense public pressure, British Prime Minister David Cameron has said the "UK will accept thousands of refugees" and then clarified that number as a mere "15,000."

That this is not a matter of capacity or system but rather a crisis of politics and conscience is made clear by the fact that Europe is the largest economic unit in the world and has a population of about 500 million people and yet fails to manage the refugee crisis. It has many institutions and mechanisms to absorb any large number of refugees.

Turkey has a population of 78 million and is hosting 2 million refugees from Syria and Iraq, not counting the many thousands who had come before from the Balkans, Caucasus, Afghanistan and elsewhere. Not the largest economy in the world, Turkey is currently the largest refugee-hosting country in the world. Jordan, Lebanon, Iraq and Egypt have close to 2 million Syrian refugees combined. Until recently, the entire European continent had a mere total of 200,000 Syrian refugees.

It is therefore simply misleading to claim that this is such an enormous crisis that the wealthy European nations cannot cope with it. Turkey alone has taken in more refugees from Syria and Iraq in one week than all of Europe in months. That is why President Erdoğan calls on European leaders to do more because they can.

The refugee crisis now reaching the European land has laid bare another distressing fact: Europe's self-perception and attitude toward others. Some European leaders and anti-immigration groups claim that EU countries should not accept refugees because the influx of refugees from Muslim countries will undermine Europe's Christian values. This is wrong both politically and morally.

First of all, it is against Christian values to turn a blind eye to the suffering of refuges regardless of their faith, ethnicity, culture or country of origin. Discriminating among them and claiming that only Christian refugees can be accepted, meaning "worthy of protection," goes against both religious faith and human conscience.

Luckily, the responsible leaders of the West are responding to this nonsense. Merkel lashed out at the anti-refugee, anti-immigration groups and demagogues in Germany and added that "if Europe fails on the question of refugees, this close connection with universal civil rights ... will be destroyed and it won't be the Europe we want." Pope Francis called on Catholics in Europe to take in refugees. Numerous civil society organizations opened their arms and homes to those stranded in ports, train stations and border crossing across Europe.

It is clear that this is not just about Syrian, Somali or Afghan refugees or smugglers, though these problems need to be addressed in their own terms, but a crisis about European values and where Europe stands in the face of a preventable humanitarian disaster.

As EU leaders prepare to take concrete steps in the next few weeks, we should remember the root cause of the refugee crisis. The suffering of the Syrian people as victims of a brutal and unjust war will continue until the war in Syria is ended. They are already caught between the barrel bombs and chemical weapons of the Assad regime on the one hand, and the barbaric killings of the Islamic State of Iraq and al-Sham (ISIS) on the other. The world's indifference to their plight, as it has been the case over the last four years, must come to an end. Otherwise, their plight stands to become the shameful disgrace of the so-called modern, civilized world.