Consensus politics after the elections 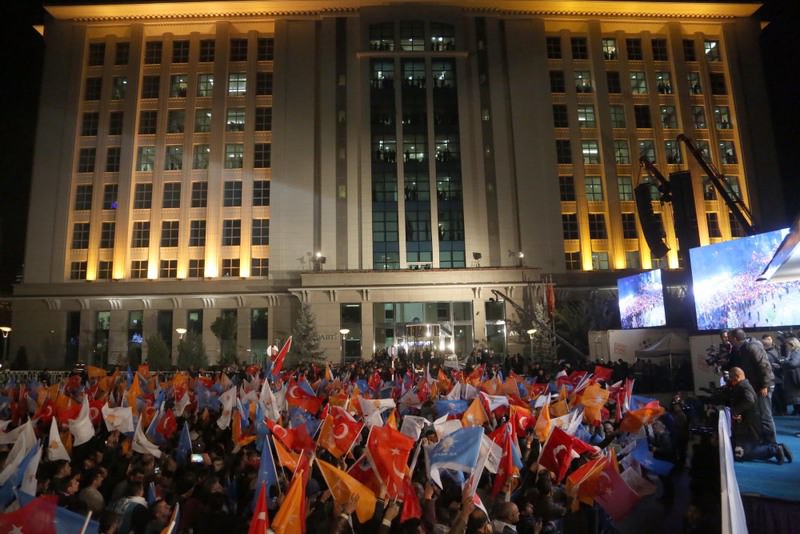 AK Party supporters wait for the start of PM Davutou011flu's speech in front of the party headquarters in Ankara following the Nov. 1 victory.
by İbrahim Kalın
Nov 07, 2015 12:00 am

After four elections in 18 months, Turkey needs to leave behind partisan politics and focus on the country's larger strategic issues. This is needed for Turkey's internal peace and stability as well as to address such urgent issues as terrorism, refugees and revitalizing the economy. Consensus politics can help a great deal to overcome unnecessary tensions and polarization.

The sharp contrast between the results of the June 7 and Nov. 1 elections presents a number of lessons for political stability and social peace. One key outcome is that differences on political and economic issues should not weaken but rather strengthen the significance of pluralistic politics. With differences acknowledged and respected, a strong and stable government is needed to address Turkey's current challenges and regional problems. The responsibility to make this happen falls not only on the shoulders of the Justice and Development Party (AK Party), but all political parties. Without a sense of togetherness, no civic politics is possible.

The word consensus is derived from the Latin verb "consentire," which means to feel together, agree. Both meanings are related and important as agreement entails feeling together, i.e., having the same feeling for a common goal as individuals and as society. Working toward a common agenda does not expunge differences. The differences, if managed rationally and ethically, can enrich politics and society. Furthermore, unity is not uniformity. Seeking common ground and nourishing a shared feeling does not necessarily lead to a group of stereotypic individuals and a monolithic society. Managing differences through a civic code of ethics is key to ensuring consensus politics for all citizens. Turkey's social and political assets, which cannot be reduced to one set of issues, call for a perspective of unity in diversity.Translating this principle into practice, though not easy, is the primary goal of the art of politics. Turkey's diverse social tapestry includes various identities and groups. Turkish, Kurdish, Arab, Circassian, Albanian, Roma and other groups make up Turkey's social-ethnic map. Religious minorities include Orthodox Christians, Catholics, Assyrians and Jews. Then we have ideological groups ranging from the devoutly religious and nationalist to liberal, leftist and secular. Each perspective can contribute to the common good of the people and the country but it requires a certain sense of responsibility. There are also differences among these groups as neither secularists nor nationalists, for instance, make up a monolithic group. These differences should be embraced and celebrated as a source of strength rather than division and polarization.

What cuts across these diverse perspectives is a shared history and cultural rootedness on the one hand, and democracy, freedom, stability and prosperity, on the other. A rational political order is one in which diverse points of view are respected and represented within the framework of the rule of law and equality for all. A strong, peaceful and stable Turkey is in everybody's interests. It is also in the interest of regional and global players that need Turkey as a strong and stable partner in an increasingly chaotic region and polarized world.

In his victory speech on Nov.1, Prime Minister Ahmet Davutoğlu said that the new government, which should be formed within the next two weeks, will work to ensure the equal representation of all citizens and take into account all opinions that are constructive. President Recep Tayyip Erdoğan echoed this call when he said on Nov. 4 that it is time to embrace each other regardless of our differences. He also called on political leaders to start working for a new constitution - a key social and political duty that will ensure the advancement of fundamental rights and give Turkish society and economy a new boost. The opposition parties that suffered significant losses in the Nov. 1 elections acknowledged the will of the people as was manifested at the ballot box. Instead of blaming each other or the people for their choices, all parties should draw lessons from the two elections in the last five months.

Those who rely on elitist fantasies and consistently err in reading Turkey's social and political dynamics should listen to the ordinary people more attentively. Hopefully, these results will also give them an occasion to reconsider their failed strategy to present Erdoğan-bashing as politics or journalism.

As I had said on the 91st anniversary of the founding of the Republic of Turkey, "the old homogenous and static definition of the nation and the political order is replaced by a dynamic, multicultural and multi-religious notion of the nation that is in peace with the historical experience of the citizens of the Turkish Republic on the one hand, and open to the world on the other. Striking a proper balance between historical rootedness and openness to the world is what will ensure the strength and continuity of the Republic

Consensus politics can go a long way in nourishing an ethics of coexistence for all citizens of Turkey - a common civic task that will lower tensions and overcome polarization.
Last Update: Nov 07, 2015 1:30 am