The Turkish Presidency of the G20 summit in Antalya 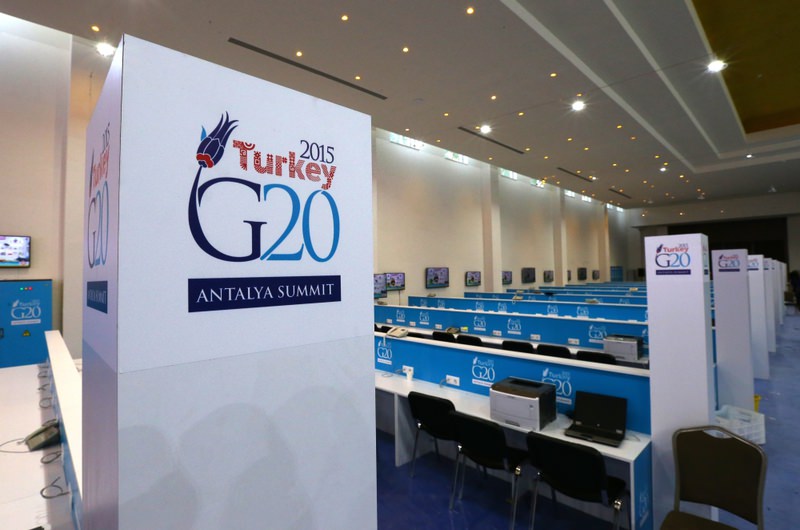 As President Erdoğan prepares to host the G20 Summit in Antalya this weekend, the world leaders will be coming to Turkey with ideas and proposals that are expected to boost global economic growth, create new jobs, reduce climate change, address the worsening refugee crisis and the fight against terrorism in all of its forms

Turkey will host the G20 summit in Antalya on Nov. 15-16. The summit comes at a time of major economic, political and security challenges for the rich and poor of the world. It is expected to prepare the ground for a road map that will find ways to increase global economic resilience, increase trade and investment, help low-income countries and contain the growing threat of climate change. Under the chairmanship of President Recep Tayyip Erdoğan, the summit agenda includes the current state of the global economy, sustainable growth, development and climate change, investment, trade and energy. In addition, the leaders will discuss global terrorism and the widening refugee crisis that now stretches from Afghanistan, Somalia and Libya to Syria and Europe.

During its G20 presidency, Turkey focused on three key areas: Inclusiveness, investment and implementation, known as the three 'I's. Inclusive growth extends from national economies to the various segments of global economy. At the national level, it focuses on supporting small and medium enterprises (SMEs).At the global level, it refers to supporting low-income developing countries to ensure global economic balance. Turkey currently chairs the U.N. Least Developed Countries program and hosted the Fourth U.N. Conference on Least Developed Countries (LDC-IV) in Istanbul on May 9-13, 2011. The Antalya summit will seek to develop new strategies to help the poorer countries of the world and reduce global inequality.

Investment is critical for creating new jobs. It is also important to boost global trade and support innovation. While each country needs to devise its own investment strategies, they should be designed in such a way as to enable national growth as well as global mobility. At this point, supporting SMEs is crucial as they provide about 60-65 percent employment across the world. Turkey led the efforts for the establishment of the Global SMEs Platform for the first time.

Finally, implementation is key to the success of the decisions that will be taken during the summit. This includes global financial regulations, sustainable development, climate change, lowering unemployment and a host of other economic and social issues that will shape the future of the global economy and affect the lives of hundreds of millions of people. Among these are financial regulations, taxation and the reform of the IMF.

The Turkish presidency of G20 2015 introduced several new ideas and platforms. The very first energy ministers meeting was held in Istanbul on Oct. 2. The Women-20 was established for the first time this year under Turkish presidency, which President Erdoğan inaugurated. The W-20 will seek to increase the participation and fair treatment of women in the labor force. The other engagement groups included Business-20, Labor-20, Youth-20, Civil Society-20 and Think-Tank-20. The findings and final communiqués of these working groups will be presented in Antalya.

Climate change is another major theme on the summit agenda. A full session has been slated to discuss the current state of climate change and the U.N. charter on the issue. The differences between the advanced industrial and developing countries need to be addressed before the U.N. Climate Change Summit in Paris at the end of this month. The Antalya summit will provide a warm-up venue to develop a fair and feasible action plan to reduce climate change.

In addition to the major economic and ecological issues, the Antalya summit will also address global political issues including the war in Syria, the refugee crisis and global terrorism. Even though the G20 is primarily an economic platform, hot global issues always find their way into its agenda. Two years ago, the summit in Russia addressed the war in Syria and the use of chemical weapons. Last year, the crisis in Ukraine and the Russian annexation of Crimea took up the political agenda in Australia. So it is only natural that G20 leaders will discuss the refugee crisis as well as the question of regional and global terrorism.

As President Erdoğan prepares to host the G20 Summit in Antalya this weekend, world leaders will be coming to Turkey with ideas and proposals that are expected to boost global economic growth, create new jobs, reduce climate change, address the worsening refugee crisis and the fight against terrorism in all of its forms. As global challenges require global responses, the Antalya G20 Summit will serve as a critical platform to formulate a global agenda for the common good of our world.

Presidential spokesperson for the Republic of Turkey
Last Update: Nov 10, 2015 11:11 am