Western and Muslim nations must unite against terrorism 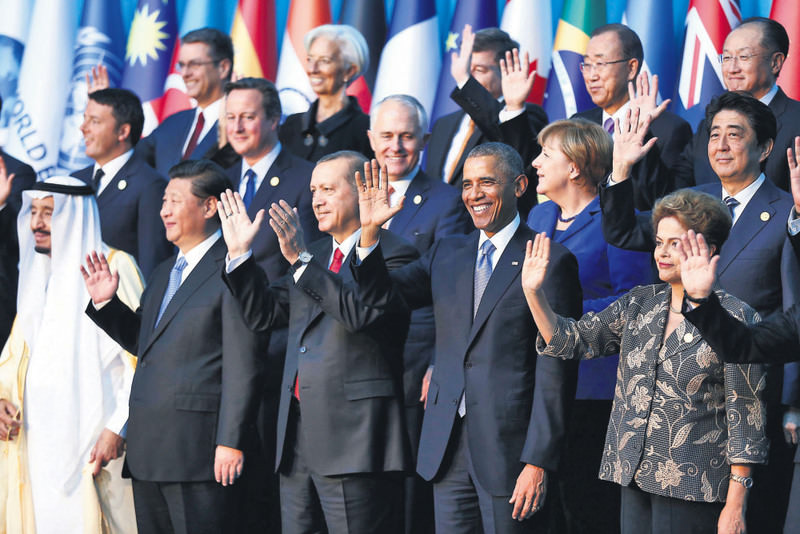 Only a cooperative common fight from Western and Muslim countries against violent extremism and global terrorism, striking it at its root, will be able to prevail

The attacks in Paris on Nov. 14 as well as the hostage situation in Bamako, Mali on Nov. 20 are the latest incidents in the short yet deadly history of DAESH and the likes. From Ankara and Beirut to Baghdad and Paris, terrorism is a global phenomenon and requires a global response.

The world leaders at the G20 summit held in Antalya on Nov. 15-16 called for solidarity and cooperation against terrorism in all its forms. President Recep Tayyip Erdoğan invited Western and Muslim countries to step up their efforts to eliminate the menace of terrorism. These calls present an opportunity to address the root causes of terrorism, including DAESH.

It goes without saying that terrorism is a multi-headed monster and cannot be reduced to one single cause. But the war in Syria and the security weaknesses in Iraq are among the immediate causes in the recent rise of terrorist incidents. DAESH uses the war in Syria to recruit new members and radicalize young Muslims in Europe and the Muslim world. Its warped ideology goes against every tenet of Islam and the practices of the world's 1.7 billion Muslims. A comprehensive and robust struggle against this ideological deviation should be part of any long-term effort to confront violent extremism. Here, Muslim political and religious leaders have a critical role to play to recover the middle path of Islam and demonstrate the poverty of fanaticism in the name of religion. The open letter that prominent Muslim scholars and academics wrote to reject DAESH's distorted ideology is an important step in the right direction.

The war of ideas against violent extremism, however, must be coupled with a fight on the ground. No religious or political statement would be sufficient to prevent terrorism without changing the circumstances that produce it in the first place. The war in Syria, which has claimed the lives of more than 360,000 people so far and has seen every possible war crime, has fueled radicalism and extremism around the world. Even liberal Western countries are not immune to the spread of extremist ideas. Containing the reach of DAESH terrorism and destroying it requires ending the war in Syria. As long as the criminal regime of Syrian President Bashar Assad remains in power, terrorist groups will find ways and excuses to justify their barbaric acts.

As things stand now, the Assad regime and DAESH feed off each other. DAESH claims to fight against Assad but it has killed more moderate opposition members than engaging in any serious battle with the Syrian regime. Assad allows DAESH to operate in Aleppo, Raqqa and the rest of the country because he uses it as a propaganda tool to justify his deadly rule. His supporters, i.e., Iran, Russia and Hezbollah, are using DAESH as a pretext to operate in Syria. This vicious circle must be broken.

The refugee crisis that has reached the doors of Europe is also related to the two evils of the Assad regime and DAESH terrorism. Syrian refugees are fleeing the state terror of the Assad regime as well as the violent extremism of DAESH. Neither has a place in the future of Syria. If we are serious about putting an end to DAESH and stopping the flow of refugees, we cannot allow Syria to remain a war zone that deepens the crimes of the Assad regime and helps DAESH recruit new members.

A similar security situation continues to exist in Mosul under DAESH control. One glimmer of hope is the liberation of Sinjar from DAESH under the command of Kurdistan Regional Government (KRG) President Masoud Barzani in Northern Iraq.

The Paris attacks caused outrage and anger, and this is perfectly understandable. It is certain to lead to tighter security measures across Europe. Allies must work together to prevent new attacks, increase intelligence sharing and conduct joint operations against DAESH targets.

Blaming the refugees for the recent attacks is to put the cart before the horse. It is the dual terrorism of the Assad regime and DAESH that led to the refugee crisis, not the other way around. There is a further danger of politicizing the crisis to vilify and demonize minority Muslim communities in Europe and the U.S. Right-wing groups and politicians have already begun manipulating the attacks to score cheap points such as treating refugees as potential terrorists and rhetoric about introducing religion tests. This is not only insane, but also exactly what extremists want so that they can shamelessly preach about the evil and decadence of Western countries to recruit new members. Islamophobic attacks are likely to be on the increase in this environment only to play into the hands of extremists. This vicious circle must also be broken.

Finally, we all have to take a firm stance against terrorism in all of its forms.

DAESH terrorism is evil, but not different from other types of terrorism. Turkey has been battling PKK and Revolutionary People's Liberation Party-Front (DHKP-C) terrorism for years and understands the challenges facing EU countries. Turkey has also been the victim of DAESH terrorism in recent years. But whitewashing the PKK's crimes in the name of fighting DAESH is not only wrong, but also dangerous, as one cannot fight one terrorist organization without another. A combined strategy of fighting extremist ideologies and changing the circumstances on the ground is needed to end this horrific episode of global terrorism. Western and Muslim nations have a common interest to work together.
Last Update: Nov 21, 2015 10:43 am