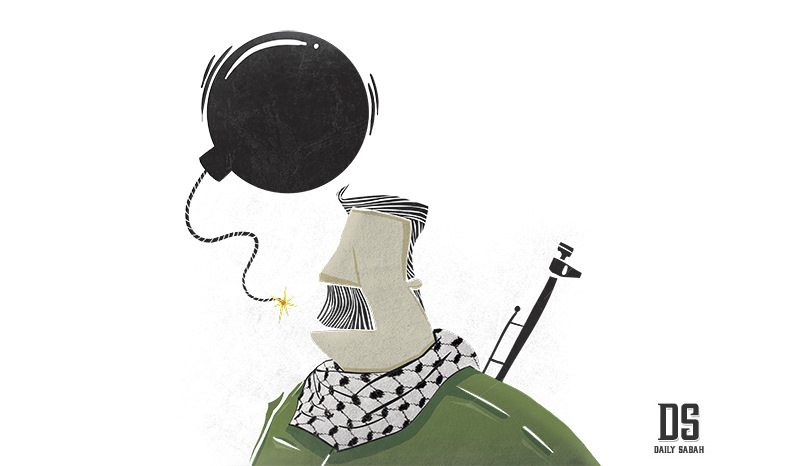 The PKK is probably the only terrorist organization in the world that carries out bloody terrorist attacks but the government instead is blamed for the violence. It is the only terror group that shamelessly says ‘peace' while blowing up people with roadside bombs and murdering people on the streets

The PKK's newfound story that it is fighting the Islamic State of Iraq and al-Sham (ISIS) in Iraq and Syria and therefore should be seen as a legitimate entity and even supported is being circulated without critical scrutiny. A terrorist organization on the list of the U.S., EU and other countries, the PKK is seeking to justify its violent terrorism by using the war in Syria. Mainstream Western media outlets and some politicians are letting themselves be used in the PKK's dirty war and in its propaganda machine.

There is another, more insidious reason why the PKK is selling its story. It is the anti-President Recep Tayyip Erdoğan animus that is blinding many to PKK terrorism. The anti-Erdoğan campaign is now fueling some of the wildest and most ridiculous conspiracy theories about the new wave of violence by the PKK.

One such theory is that Turkey used the fight against ISIS as a smokescreen to attack the PKK. Now that Turkey has opened its air bases to the international coalition and carried out air strikes against ISIS targets in Syria, this argument has worn off. Furthermore, as part of its fight against ISIS, Turkey has stopped about 20,000 foreigners at its borders, deported 2,000 of them, detained over 500 suspected individuals and arrested 170 of them.

The new conspiracy theory, however, is the claim that Erdoğan started a war because he wants to bring the Justice and Development Party (AK Party) to power again after it lost its parliamentary majority in the June 7 elections.

This story, made up by PKK outlets, is now endorsed by Turkish secularists and nationalists alike whose only common denominator is their hostility to Erdoğan. Hatred can be a bad motive for political maneuvering, but it can never be a basis for rational action. If it is really Erdoğan who orchestrated this new wave of violence for political gain then the PKK can easily stop all attacks, lay down its arms and foil Erdoğan's alleged plot. What is holding the PKK from disarming now so that it can prove to the world that it is seeking peace and not violence?

Why would Erdoğan, who initiated the reconciliation process and secured years of peace and development in Kurdish-populated areas, want to alienate Kurdish citizens? Erdoğan has done far more for the rights, safety and prosperity of the Kurdish citizens of Turkey than any other leader.

The truth is that the PKK has refused to disarm despite calls by its jailed leader Abdullah Öcalan since March 2013. Since then, numerous delegations visited Öcalan and brought his messages to the PKK to end the armed struggle. Every time, the PKK found an excuse not to disarm. In the months leading up to the June 7 elections, it amassed weapons in cities and carried out over 100 terrorist attacks after the elections despite the fact that the Peoples' Democratic Party (HDP), the party it supports, won 80 seats in Parliament. The PKK knows that its disarmament will be the end of its raison d'etre.

The PKK is recognized as a terrorist organization in the United States, EU and other countries. It kills Turks and Kurds alike using immoral and inhumane terror tactics. It employs child soldiers in Turkey and Syria.

Yet no HDP members have yet to designate the PKK as a terrorist organization. They have not even dared condemn its terrorist attacks that have killed dozens of soldiers, police, health workers and civilians over the last six weeks. Instead of playing a political role and calling on the PKK to disarm, they seek to justify its terrorist tactics. They try to equate Kurds with the PKK, thus betraying both Kurds and Turks who believe in the reconciliation process and who supported it until the PKK began its attacks again. People have not forgotten the HDP's call for street violence on Oct. 6-8 2014, which resulted in the killing of 50 people across the country. Politics cannot be manipulated to justify terrorism.

The PKK is probably the only terrorist organization in the world that carries out bloody terrorist attacks, but the government is instead blamed for its violence. It is the only terror group that shamelessly says 'peace' while blowing up people with roadside bombs and murdering people on the streets.

Instead of exposing the ugly face of terrorism, the Western media is engaged in lionizing and romanticizing PKK violence. What would be the reaction if a similar campaign of whitewashing ISIS or al-Qaida terrorism was run by mainstream media outlets? Wouldn't those people be detained and penalized under the law of the promotion of terrorism as is the case in the U.K., France and Germany?

Next time someone serious talks to HDP officials, they can ask them a few simple questions: Is the PKK a terrorist organization or not? Do they condone PKK violence or not? Do they approve of the use of child soldiers by the PKK and Democratic Union Party's (PYD) armed People's Protection Units (YPG) in Turkey, Iraq and Syria? Why are they silent about the human rights violations and abuses in PYD-held areas?

To put it simply, are they on the side of democracy or terror? Honest answers to these questions can bring a degree of moral clarity about the PKK's dirty war.

Presidential spokesperson for the Republic of Turkey
Last Update: Sep 12, 2015 2:10 am
RELATED TOPICS