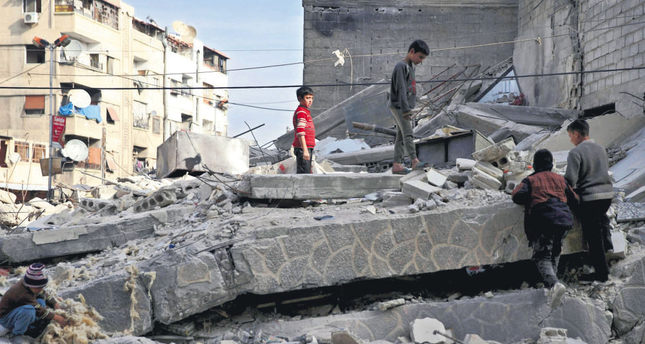 With 90 percent of Russian attacks so far targeting moderate Syrian opposition groups rather than DAESH, it is obvious who Moscow is trying to protect

The downing of a Russian jet fighter over the violation of Turkish airspace is another casualty of the Syrian conflict. The incident has created short-term turbulence in Turkish-Russian relations but will not derail it. The relationship has enough depth and political-economic capital to overcome it.

Russian jets violated Turkish airspace multiple times in the past. Turkey's warnings seem to have gone unheeded by the Russian military. Recently at the G20 Leaders Summit in Antalya, Presidents Recep Tayyip Erdoğan and Vladimir Putin took up this issue again and agreed on avoiding any incidents along the Turkish-Syrian border. Turkey's rules of engagement are clear and have been made known to all sides in the region.

This was not a hostile act towards Russia. The identity of the warplane was established after the shooting. Despite major differences over the Syrian conflict, Turkey has not targeted any Russian interests and has no intention of doing so. In fact, Turkey did not join sanctions against Russia over the Ukraine crisis. Both countries have developed strong economic relations over the last decade and created new opportunities for their citizens.

It is only natural that sentiments run high in the immediate aftermath of the incident. But the Turkish-Russian relations have enough width and depth to overcome this turbulence.

President Erdoğan, who cultivated a special relationship with President Putin despite criticism from the West for doing so, expressed his sadness over the incident. Speaking to France24, he added that "had we known it was a Russian plane we may have acted differently."

But this does not change the fact that as a NATO member Turkey has the right to defend its land and airspace against any violations. Turkish airspace is also NATO airspace.

As Prime Minister Ahmet Davutoğlu said, "The downing of an unidentified jet in Turkish airspace was not - and is not - an act against a specific country. Turkey took action, based on standing rules of engagement, to protect the integrity of its sovereign territory. While the measures to defend our territory will remain in place, Turkey will work with Russia and our allies to calm tensions."

The claims that Turkey supports DAESH and buys oil from it are part of a smear campaign that has no foundation. Those who have made such claims have yet to produce a single piece of concrete evidence. Instead, they narrate anecdotal stories with references to unnamed persons and unspecified locations. But what we know for sure is the fact that both the U.S. and the EU have sanctioned key people for buying oil from DAESH on behalf of the Assad regime. They include Syrian businessman George Haswani, Mudalal Khuri, a Syrian banker, and Kirsan Ilyumzhinov, a wealthy Russian businessman and the president of the World Chess Federation.

In regards to foreign terrorists going into Syria, Turkey has done more than any other country. It has deported over 2,500 individuals and barred 25,000 people from entering the country on suspicion of terrorism. It has arrested hundreds of individuals for suspected ties to DAESH. The countries of origin from which these individuals come have begun beefing up security only after the Paris attack. Intelligence sharing and coordination is key to the success of stemming the flow of foreign fighters into DAESH ranks. No country can deal with cross-national and cross-border terrorism on its own.

Blame games should be put aside; instead, we should concentrate on conducting an effective fight against DAESH and bring about a fair and reasonable political transition in Syria. The Russian-Iranian plan to save the Assad regime will only strengthen the hands of DAESH and other terrorists. Bombing moderate Syrian opposition groups help only the two criminals-in-chief of the Syrian war: the Assad regime and DAESH. The world must be rid of these two evils at the same time. As Presidents Barack Obama and Francois Hollande pointed out at the joint press conference at the White House, there is no place for Mr. Assad in the future of Syria. The longer he stays, the longer the Syrian war will continue, giving ammunition and space to DAESH for more terrorist recruitment. By helping the Assad regime continue his criminal war, its supporters are deepening, not resolving the crisis.

There are further questions about Russia's military actions in the Turkmen mountain regions near Turkey. There are no DAESH groups in the Syrian Turkmen areas. The Russian jets are bombing moderate opposition groups to help the Assad regime move towards Jisr al-Shughur and Idlib currently under opposition control. This is a wrong-headed strategy as it will not help the fight against DAESH. As a matter of fact, 90 percent of the Russian attacks so far have targeted moderate Syrian opposition groups rather than DAESH.

If Russia is serious about eliminating DAESH, it should stop bombing anti-DAESH Syrian groups and help the political transition process that will bring an end both to the Assad regime and DAESH terrorism. No one has any problem with Russia or the U.S. or France hitting DAESH targets. Unnecessary divisions among the anti-DAESH coalition members will only help the terrorists and the Assad regime. Instead of costly attempts at global power rivalries, the world powers need to focus on the root causes of DAESH terrorism, the state terror of the Assad regime and the refugee crisis.