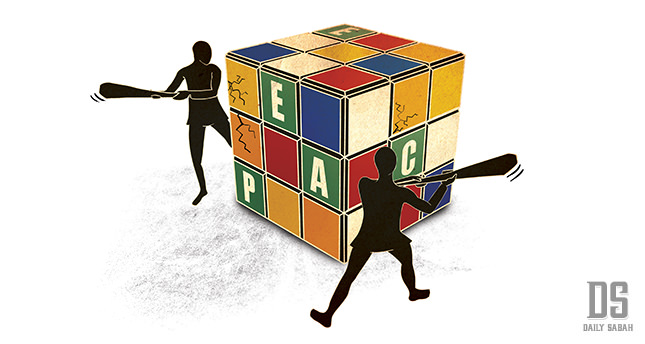 By storming city districts and using civilians as human shields, the PKK is engaged in a self-destructive war to stay alive. In the meantime, it is using the war in Syria and the fight against DAESH as a smokescreen to sell itself to the West

Reading mainstream Western newspapers about the recent events in Turkey, one is led to believe that Turkey has begun an all-out war against its Kurdish citizens and that the government is attacking the poor, peace-loving PKK to prevent it from its fight against DAESH. While Turkey has given the wide political and cultural rights to its Kurdish citizens over the last decade and invested billions of dollars in the Kurdish-populated areas, the PKK has refused to disarm and instead chosen to continue its terrorist activities. Turkey is taking security measures that any other democratic country like France, the U.K. or the U.S. would do against terrorism.

One would normally think that serious journalism would not take PKK propaganda seriously and that it would seek to be balanced, which is a delicate task in any conflict situation. Instead, a PKK mythology is becoming part of Western reporting. Some openly whitewash the PKK's terrorist attacks and downplay the fact that the PKK is on the list of terrorist organizations in the EU and the U.S. The attempt to create a peace dove out of the old-fashioned Marxist-Leninist PKK has reached such new levels that the well-known author and historian Halil Berktay felt compelled to question the BBC's coverage of the PKK and the extent of disinformation and selective journalism in similar outlets.

Now, Noam Chomsky is accusing Turkey of the "deliberate massacre and deportation of Kurdish and other peoples in the region." One needs to ask where and when such an alleged massacre has taken place. Mr. Chomsky needs to get his facts right. Like Mr. Zizek, he seems to assume many things about Turkey without investigating the facts on the ground. May be he has "friends," like Zizek, who feed him this sort of stuff. Well, Mr. Zizek admitted that his "friends" misled him about Turkey in a recent piece which he wrote in response to me. With such friends, how anyone can properly analyze Turkey or any other country for that matter.

When President Recep Tayyip Erdoğan reached out to Mr. Chomsky last week and invited him to Turkey to see things first-had, he reacted with this emotional response: "If I decide to go to Turkey, it will not be on his invitation, but as frequently before at the invitation of the many courageous dissidents, including Kurds who have been under severe attack for many years."

Now, even this sentence contains highly questionable assumptions. "Kurds ... under severe attack for many years..." What is Mr. Chomsky talking about here? Turkey or another country? Unfortunately, the poisonous habit of launching ad hominem attacks against Erdoğan seems to have caught up with Mr. Chomsky. Anyone who knows anything about recent Turkish history and what President Erdoğan has done for the Kurds would be troubled by such a claim.

But there is something more cynical here, and it is the implication to equate the Kurds with the PKK. This is precisely what the PKK is seeking to do, and this is what must be rejected. The PKK is not the Kurds and the Kurds are not the PKK. There are millions of Kurds in Turkey who do not share the PKK's Marxist-Leninst ideology and terrorist tactics. Kurds enjoy their political rights and services like other citizens. By contrast, the PKK, as admitted by its leaders, has killed hundreds of Kurds who refused to join them. Internal executions are commonplace in the PKK's history. Most recently, the Democratic Union Party (PYD), the PKK's Syria branch, committed acts in Tel Abyad, Syria, which according to Amnesty International could amount to "war crimes."

The successive Justice and Development Party (AK Party) governments have done far more than any other government to recognize the reality of the Kurds in Turkey and provide services, schools, universities, hospitals, airports and jobs in the Kurdish populated areas. Kurdish politicians have entered Parliament in free and fair elections. The bans on the use of Kurdish language on TV, radio, print media, courtrooms, prisons and political campaigns have all been lifted. Millions of Kurds have been lifted out of poverty, given vocational training, university education, etc. The old policies of denial and assimilation that led to the rise of the PKK have been rejected under Erdoğan.

President Erdoğan, as prime minister, began a series of peace processes in 2005, 2009 and 2011 to resolve the Kurdish issue. The ultimate goal was and remains to end the armed struggle and have the PKK disarm. As a matter of fact, this process worked and there were no clashes for more than two years between 2011 and 2013. Abdullah Öcalan, the jailed leader of the PKK, called on the PKK three times to disarm. But instead of taking up this historic opportunity and disarming, the PKK decided to go back to the one thing it has known best since 1984: armed struggle and terrorism.

As I explained before, "It would be helpful to remember briefly what happened over the last two years to understand who actually exploited and sabotaged the resolution process. Here is a short chronology: on Nevruz day, March 21, 2013, Abdullah Öcalan made his first call for the disarmament of the PKK. On May 7, 2013, Murat Karayılan declared that the PKK will withdraw all of its forces from Turkey. On July 2, 2013, PKK terrorists attacked police stations in Lice, Diyarbakir with one person dying in the clashes. On Sept. 9, 2013, Cemil Bayık was elected as the head of Kurdish Communities Union (KCK). In his first statement, he hinted at the restart of terrorist attacks. On Sept. 30, 2013, Prime Minister Recep Tayyip Erdoğan announced a comprehensive democratization package, addressing most of the legitimate demands of the resolution process. The PKK responded by announcing the formation of a new urban militia force called the Patriotic Revolutionary Youth Movement (YDG-H).

On Nevruz day again on March 21, 2014, Öcalan made another call to the PKK to disarm. His message was read in both Turkish and Kurdish in Diyarbakir. On June 1, 2014, a HDP delegation went to meet Öcalan. The month of June saw numerous terrorist attacks by the PKK, killing soldiers and civilians. On Oct. 8, 2014, Peoples' Democratic Party (HDP) Co-Chair Selahattin Demirtaş called for massive street protests on the pretext of helping Kobani. The events led to the death of 50 people and polarized society again. The opposition parties attacked the government for being too soft on the PKK. On Dec. 20, 2014, Cemil Bayık said that "disarmament means death" for the PKK. On Feb. 28, 2015, Öcalan made another call to the KCK/PKK to disarm. In April and May of 2015, the PKK attacked security forces in the eastern and southeastern cities, terrorized people before the June 7 elections, blocked roads, collected money forcibly, burned vehicles, attacked dams and threatened anyone who did not follow their orders. After the terrorist attack in Suruç on July 20 where 33 people were killed, the PKK intensified its terrorist attacks and declared open war. (The full chronology can be found here: http://sabahdai.ly/PBCaZ6) It is against this background that Turkey launched its offensive against PKK terrorism.

The peace process was deliberately sabotaged by the PKK because it was unable to come round to the fact it had to lay down its arms. On June 12, 2015, after Demirtaş said that the PKK could lay down its arms with Öcalan's (renewed) call, the KCK, the PKK's head organization issued the following statement: "We own the will to disarm. Demirtaş or Öcalan cannot urge us to lay down our arms." Those who accuse Turkey of continuing the current fight against the PKK should pay attention to these simple facts.

By storming city districts and using civilians as human shields, the PKK is engaged in a self-destructive war to stay alive. In the meantime, it is using the war in Syria and the fight against DAESH as a smokescreen to sell itself to the West. Unfortunately, it has some buyers. The funny thing is that one of the most brutal and bloodiest terrorist organizations in recent history accuses President Erdoğan of oppression and authoritarianism. Some jump at this nonsense on the premise that the enemy of my enemy is my friend. Supporting the PKK to score a point against Turkey is like supporting DAESH or al-Qaida to score a point against the U.S. government. Both are wrong.

The way forward lies in the PKK's cessation of all terrorist activities and laying down its arms. While establishing public order, the government continues to cater to the needs and legitimate demands of its Kurdish citizens - the very people who suffer the most from PKK's nihilistic terrorism.
Last Update: Jan 23, 2016 10:38 am