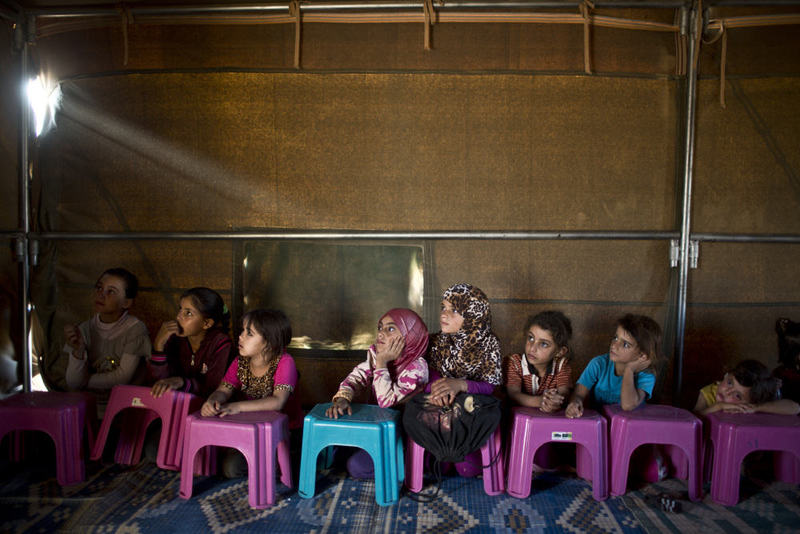 Syrian refugee children attending a class at a makeshift school set up in a tent near the Syrian border on the outskirts of Mafraq, Jordan. (AP Photo)
by İbrahim Kalın Feb 06, 2016 12:00 am

If the world is really serious about containing the refugee crisis and stemming the spread of DAESH terrorism, it ought to do more to stop the war in Syria and create areas of safety for the Syrian people

The U.N.-brokered Geneva talks on Syria, based on U.N. resolution 2254, had already a shaky start and now appear destined to end in dismal failure. The international community has once again left the Syrian people to the killing machine of Syrian leader Bashar Assad's regime and its backers.

On Feb. 4, Steffan de Mistura, the U.N. special envoy for Syria, announced that the talks have been suspended until Feb. 25. The announcement came after days of diplomatic shuffling as to who will attend the talks and how the conditions laid out in U.N. 2254 will be implemented. The continued bombardment by Russian and regime forces has not stopped going into the Geneva talks, thus violating the simple precondition of the negotiations.

In its current setting, the new round of talks will hand a political victory to the Assad regime as it intensifies its military campaign again on moderate opposition groups and civilians in and around Damascus, Aleppo, Idlib and north of Latakia. Together with Iran and Hezbollah, the Russian military action that began on Sept. 30 in Syrian territories has had only one goal so far: Attacking and weakening the moderate opposition and helping the Assad regime. The attacks have intensified in recent weeks, killing dozens of people without discrimination. The Russian-Iranian-Assad alliance shows no signs of letting up its violence. This makes the Geneva talks a farce.

In the meantime, the U.S., fixated upon the so-called war against DAESH without a real and effective strategy, shows no determination to push either Russia to end its air bombardments or force the Assad regime to get serious about political transition. It seems to be more interested in teaming up with certain groups in the north of Syria than really changing the course of events to prevent further loss of life and deliver on the promises made to the Syrian opposition.

No anti-DAESH strategy will succeed until and unless it includes a component to deal with the Assad regime. They are the two evils of the Syrian war and feed off each other. To this day, neither the Syrian regime nor Russia has really taken any serious action against DAESH. In the last two years, DAESH has killed more opposition members and civilians than regime soldiers.

It is a political and moral failure of the highest order to say that the Assad regime has lost its legitimacy, as the American officials say on every occasion, and then let that regime continue to commit war crimes, starve men, women and children to death, kill them with barrel bombs and bomb destroy their hospitals and bakeries. The regime and its backers are intent on battling this out to the very end. Talks without changing the balance of power on the ground will only help this criminal regime.

The Syrian opposition demands a cease-fire, humanitarian aid and release of prisoners. These are legitimate demands and enshrined in the negotiations and agreements leading up to the new Geneva talks. But as it became clear on day one, the regime has no interest in any meaningful negotiation for political transition. It has agreed to talks to gain time to make military advances on the ground. It has either delayed or rejected most U.N. demands to send in humanitarian aid. The U.N. displays an extremely weak position vis-à-vis the regime and the Russian-Iranian military moves.

The fight against DAESH must continue but should not come at the expense of acquiescing to the regime's atrocities. It is crystal clear by now that everyone from Russia and Iran to the Assad regime uses DAESH as a pretext to advance their policies in Syria and the Levant. The disturbing fact is that those who claim to really fight DAESH do not do anything different on the ground.

Europe expects Turkey to stop the flow of Syrian refugees while the world fails to protect them from the deadly bombardments of Russian and regime airplanes. Just this week, thousands of residents of Aleppo began marching toward Turkey after regime forces took several key villagers in the north of the city. The world sits and watches.

This sends only one message: The right of the might is what matters. This is a terrible message to send to the Syrian people and the rest of the world. If the world is really serious about containing the refugee crisis and stemming the spread of DAESH terrorism, it ought to do more to stop the war in Syria and create areas of safety for the Syrian people.

All else is empty talk.