War, diplomacy and the Syrian tragedy 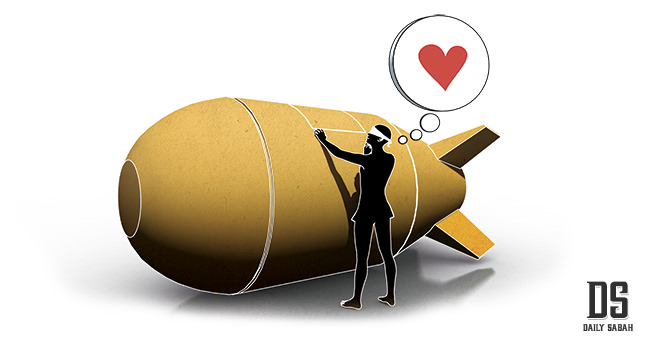 While Western nations talk about political solution in Syria, Russia continues to intensify its military assaults to change the course of events. The Munich agreement for a cessation of hostilities at the late hours of Feb. 11 is unlikely to change the situation on the ground.

Over the last two years, the key stakeholders, including Moscow, have repeated the motto that there is no military solution for Syria and have promised a diplomatic solution. But the Russian-Iranian-Syrian regime alliance has proven the opposite to be true. It is this new military push that has undermined the Geneva talks and the U.N. Security Council Resolution 2254, which stipulated, among other things, a cease-fire, humanitarian aid and release of prisoners.

Now, whether the High Negotiations Committee, which represents the Syrian opposition, will attend the Geneva talks will depend on the implementation of Resolution 2254. The Syrian opposition, led by Riyad Hijab, has every reason to be skeptical about the talks postponed to Feb. 25. The U.N. is unable to implement the provisions it itself put together to begin the negotiations.

Diplomacy has a major role to play. But let's call a spade a spade - the Kremlin sends its foreign minister around the world to give the appearance of engaging in slow and worn-out political negotiations while it sends warplanes to change the balance of power on the ground in Syria. Russian diplomacy serves as a cover for Russian military action in Syria. Russian military assaults in Syria also serve as a convenient distraction from Ukraine where none of the main issues caused by Russian moves have been resolved.

By bombing civilians, Russia is aiming to create a massive refugee influx and thereby punish Europe and Turkey. It is also sending a message to the U.S. about its strategic posturing. In many ways, Russian President Vladimir Putin is filling the strategic vacuum created by the indecisiveness of the West.

When the regime continues to kill dozens of people every day, the moral legitimacy of a one-sided strategy against DAESH becomes questionable. Yes, the fight against DAESH must continue and DAESH must be defeated. But this should not and cannot come at the expense of handing a military victory to Syrian President Bashar Assad's regime and its backers. Thousands of Syrians are fleeing the state terrorism of the Assad regime and Russian bombings rather than DAESH terrorism.

Leaving his post as France's foreign minister, Lurent Fabius, who has been critical of the U.S. strategy on Syria, described the American position on Syria as "ambiguous" and missing a "very strong commitment."

Fabius also said that U.S. inaction after its chemical weapons red lines were crossed further and emboldened Putin in Ukraine and Syria.

As if to confirm Fabius's point, the U.S. is concentrating its military support almost exclusively on the Democratic Union Party (PYD) and its armed People's Protection Units (YPG) at the expense of giving Russia and the Assad regime major military leverage on the ground. The PYD and YPG serve as a client of the U.S., Russia and Assad regime all at once, receiving weapons, ammunition, intelligence and air cover from them. It is thus able to sell itself as the most effective force against DAESH - the self-fulfilling justification for supporting the PYD. Any group receiving such prime support would be an effective force against DAESH. Under the cover of fighting DAESH, however, the PYD is basically extending its self-declared autonomous region in northern Syria. In the meantime, Syrian opposition forces who have been promised quality assistance and train-and-equip programs over and over again are decimated by Russian and regime forces on the one hand, and DAESH, on the other.

What happened on Feb. 10 is a case in point. With heavy Russian air support, the YPG attacked Syrian opposition groups and captured the Mannagh air base. The goal is to take Arab villages near Afrin so the PYD can expand its territorial control of the area. At the time of writing, YPG forces were waiting outside the city of Azaz, the main road between Aleppo and the Turkish border. The sad irony is that the Free Syrian Army was coming to the aid of the PYD in Kobani about a year ago. Now they are attacked by the very forces they helped liberate Kobani from DAESH.

This is a bleak situation, and it is not clear what the Geneva talks will produce. In the meantime, the idea of supporting the moderate Syrian opposition and establishing "safe zones" in Syria for Syrian refugees and civilians, as proposed by Ankara and rejected by the West without any convincing argument, is gaining traction in Transatlantic circles.

Already last year a number of prominent former diplomats and analysts called on U.S. President Barack Obama's administration to establish safe zones in northern Syria along the Turkish border. Robert Ford, a former U.S. ambassador to Syria, wrote on March 9, 2015 that "protecting [the Syrian opposition] would require some kind of no-fly zone, a step the administration has long resisted." On April 21, 2015, Republican and Democratic U.S. senators called on Obama "to create and enforce humanitarian safe zones in Syria." Former U.S. diplomat Frederic C. Hof said that "if a broader aerial exclusion zone eliminates or complicates the ability of the Assad regime to drop barrel bombs on civilian residential areas outside of the 'safe zone,' lives will be saved and ISIL [DAESH] will be deprived of a major recruiting asset." Anne-Marie Slaughter said that "by establishing a no-fly zone, the U.S. and its partners would demonstrate to Assad that their patience has finally run out, and that they are prepared to defend Syrians within Syria."

Much has happened since last year, and Russia has virtually created a no-fly zone for its own designs. Yet the idea of safe zones still has a chance to save Syrian lives and limit the military bulldozing by Russia and the Assad regime in civilian areas. Michael Ignatieff and Leon Wieseltier expressed their frustration, saying: "The moral bankruptcy has been long in the making: five years of empty declarations that Syrian President Bashar al-Assad must go, of half-hearted arming of rebel groups, of allowing the red line on chemical weapons to be crossed and of failing adequately to share Europe's refugee burden as it buckles under the strain of the consequences of Western inaction."

As a solution, they call on the U.S. to "use its naval and air assets in the region to establish a no-fly zone from Aleppo to the Turkish border and make clear that it would prevent the continued bombardment of civilians and refugees by any party, including the Russians."

Two former top U.S. diplomats, Nicholas Burns and James Jeffrey, reiterate the same point: "Most important, we believe the Obama team will have to reconsider what it has rejected in the past: the creation of a safe zone in northern Syria to protect civilians, along with a no-fly zone to enforce it."

Dennis Ross also argues for imposing a safe zone, knowing fully well that Putin will oppose it. But, he says: "Unless we are prepared to use more leverage against what the Russians are doing, we will not have Sunni partners and there will be little prospect of diplomacy working."

One thing the Syrian war has demonstrated is that diplomacy is a meaningful tool only when there is a fair balance of power on the ground. If the next round of Syria talks is to have any meaning and impact, it must have the serious backing of the international community. Without supporting the Syrian opposition and creating safe zones for Syrian civilians, diplomacy will be nothing but a casualty of war.