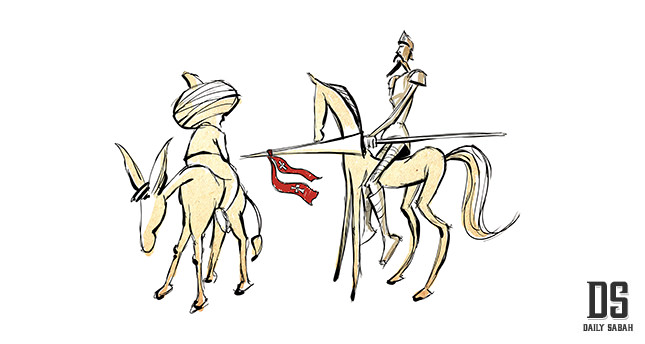 The Battle of Lepanto left many traces behind. It shaped policies, perceptions and attitudes in the centuries that followed. Tales of heroism, sacrifice, captivity and homecoming made the rounds in Europe and the Ottoman lands

The Battle of Lepanto (1571), known among the Turks as the "İnebahtı War," is arguably one of the best-known events in the long history of Ottoman-European relations. The symbolism, memories and emotions it has evoked since the 16th century have remained an enduring feature of Islamic and Western perceptions vis-à-vis each other. Being more than a mere naval battle, it has tied the destinies of very different people in unexpected ways. The stories of Miguel Cervantes, the most famous medieval Spanish author and a towering figure of Western literature, and "Hindi" Mahmud, the Ottoman statesman, poet and historian, are a case in point, bearing witness to the interconnected notions of captivity, separation and homecoming under very unlikely circumstances.

When the European navy led by Don John of Austria defeated the Ottoman fleet in Lepanto near the Gulf of Corinth, Greece, it was justifiably big news everywhere. Europeans were more shocked than the Ottomans: the invincible Turks had been defeated for the first time in several centuries and the Mediterranean would no longer be a "Turkish lake" as was feared.

Big celebrations and huge feasts were ordered across Europe. There was jubilation in the air. The "downfall of the Turk" was imminent. God, who had forsaken the good Christians in Europe for their infidelity and misdeeds, was finally coming to their help. Pope Pius V, who played an instrumental role in the victory at Lepanto, was now well-positioned to launch a new crusade against the "Saracens."

But the euphoria did not last long. The same year, the Ottomans took Cyprus. They rebuilt their navy and came back with bigger forces. New conquests followed the next year. Mehmet Sokullu, the Grand Vizier of Sultan Selim II, famously said to the Venetian ambassador Marcantonio Barbaro: "You have come to see how we bear our misfortune. But I would have you know the difference between your loss and ours. In wresting Cyprus from you, we deprived you of an arm; in defeating our fleet (in Lepanto), you have only shaved our beard. An arm when cut off cannot grow again; but a shorn beard will grow all the better for the razor." Years later, Voltaire, never missing an opportunity to use his wit and cynicism, said that the "Turks seem to have won in Lepanto."

The Battle of Lepanto left many traces behind. It shaped policies, perceptions and attitudes in the centuries that followed. Tales of heroism, sacrifice, captivity and homecoming made the rounds in Europe and the Ottoman lands. They colored the imagination of generations in myriad ways. Among these, the stories of a Spaniard and an Ottoman are worth remembering for their historical relevance, literary genius and cross-cultural importance.

Filled with a zeal for religion and the country, Miguel Cervantes joined the ranks of European armies to confront the Ottomans in Lepanto in 1571. Despite his illness and the repeated warnings of his captain, he threw himself into the battle, injuring his left hand. But he saw this as a blessing from God, for it enabled him to concentrate on his writing hand - his biggest weapon as a writer. He remembered his days of battle with pride, saying that "On that day, I was there." But several years later, Cervantes was kidnapped by Muslim pirates and taken to Algeria. This is where he spent five years as a captive. Cervantes narrates his years in Algeria in several of his works including "El Trato de Argel," "Los Banos de Argel" and of course his most famous work "Don Quixote." He was released sometime in 1580 thanks to the mediation (and the paying of ransom) by a certain Trinitarian order.

During his lifetime, Cervantes' five years of captivity had become the subject of controversy in his native land. What did he do during this time? Did he compromise his faith? Are the rumors that he secretly became a Muslim true? How does he explain his good relationship with Hassan Pasha, the Amir of Algeria under the Ottomans? Yes, he tried to escape four times but he was never penalized. To the contrary, he was well treated. Why? Such questions must have disturbed the Spaniard. But he seems to have never given up hope to escape and go home. While in captivity and watching Muslim, Christian and Jewish prisoners come and go, he made detailed observations about the Muslim faith, culture and art, governance and North African geography, all of which eventually enriched his literary works. Of course, Cervantes was no liberal or pluralist. He saw Islam and Muslims through the eyes of the spurious stories, legends and prejudices of medieval Christendom. And he must have hated his own personal situation in captivity. Yet his homecoming was a cultural and literary event in the sense that his numerous contacts with ordinary people as well as the rulers of Algeria gave him a unique opportunity that very few of his contemporaries could have had in the 16th century.

The other man whose destiny the Battle of Lepanto shaped is "Hindi" Mahmud, an Ottoman statesman, author, poet and historian. His story is also one of captivity and homecoming, resulting in a remarkable poetic work called "The Diary of Hindi Mahmud." Born in 1513-4 in Afyonkarahisar into a humble family, Hindi Mahmud rose through the ranks of the Ottoman Empire, serving as a court official, treasurer and ambassador. His penname "Hindi" was given to him by the then Crown Prince Selim, who would later become the Sultan.

The gates of misfortune were opened for him when he joined the Ottoman Navy for the Battle of Lepanto. As the Ottomans lost the war, he was taken prisoner by Don John. After weeks of painful travel, he, along with others, was brought first to Messina, then to Napoli and finally to Rome. Hindi Mahmud's life took a new turn in Rome where he was put in the prison of Castel Sant'Angelo, also known as the Mausoleum of Hadrian. This is where Mahmud's fate crossed with that of Cem Sultan, the brother of the Ottoman Sultan Bayezid and known in the West as the Zizim Prince. After losing the crown to his brother, Cem spent the last 13 years of his life as a captive in the hands of Rhodesian Knights, Pope Innocent VIII and the various feudal lords until his untimely death in Napoli in 1495. When in Rome, Cem was put in the same prison where he remained a source of intense curiosity, wild imagination and political bickering across Europe.

During his years in captivity, Hindi Mahmud never gave up hope of going back home one day. He tearfully remembered his family, wife and children. He prayed to God for steadfastness in the face of his misfortunes. He encouraged his co-prisoners to stay strong. And they did stay strong. They got closer to one another. They prayed together. They thanked their prisoners for allowing them to do Friday prayers and observe the birthday celebrations (mawlid) of the Prophet of Islam. They even said the call to prayer (adhan) out loud in prison. Castel Sant'Angelo became a sanctuary for these Ottoman prisoners.

In his poetically written diary, only portions of which have survived, Hindi Mahmud brought his literary talent to bear on his captive days in Rome. He praised Don John for his kind and noble attitude towards them. He chastised papal politics at the Vatican. From his prison cell, he followed the rioting of 1572 in Rome, the death of Pius V and the succession of Gregory XIII. He made colorful observations on European peoples and cultures. He d

reamt of conquering Rome one day, calling this ancient city the "Red Apple," the old phrase that the Turks used to describe an ultimate goal and crowning achievement.

When Hindi Mahmud was released from prison in 1575 as part of a prisoner exchange, he was 64 years old. He spent the rest of his days in Istanbul and wrote his famous book "Kisas-i Enbiya" (Stories of the Prophets). He dedicated it to Sultan Murad III who gave him his freedom back.

For both Cervantes and Mahmud, the homecoming was a rebirth and a cause for immense joy and gratitude. Although they were very different people and lived through different circumstances, what kept them going in their years of captivity was more or less the same: faith, hope and steadfastness. They are also distinguished by their literary talent, power of imagination and intercultural depth - the very qualities that have preserved their relevance to this day.

But this is not all. Their stories resonate with that of another remarkable man of the 16th century, Hasan al-Wazzan, known in the West as Leo Africanus, who was taken captive in 1518 and became an employee of Pope Leon X and wrote his world-famous "Description of Africa." Amin Maalouf's "Leo Africanus" turns his story into a literary gem and shows how this extraordinary man crossed over religious, linguistic and cultural barriers and attained his homecoming.

These stories speak volumes about the resilience of the human spirit in the face of trials and tribulations. They showcase the common notions of captivity and homecoming. But they also point to the complicated and intertwined ways in which Islamic and Western societies have interacted with one another at so many different levels. The nuances they introduce into the current Islam-West narratives are simply too important to overlook for today's trials and tribulations.