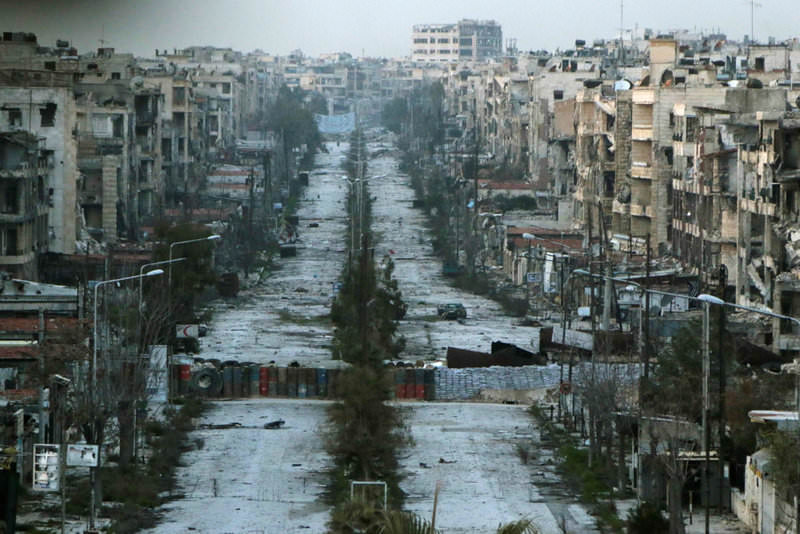 A general view shows a damaged street with sandbags used as barriers in Aleppo's Saif al-Dawla district in March 2015. In the year that has passed, the city has suffered further sunk into ruin.
by İbrahim Kalın May 11, 2016 12:00 am

The fall of Aleppo will be a key gain for the regime and its backers, however, it will deepen the already tragic humanitarian situation on the ground and will embolden the Assad regime in the face of the indifference of the world toward the most cruel and brutal war in recent times

The Syrian war, now in its fifth year, keeps fading away from the headlines and the agenda of the world community. While the world turns to the next breaking story, the carnage in Syria continues, destroying lives, communities, history and, above all, any hope that this war will end and the people of Syria will see peace and prosperity again.

Over the last four years, Syria as a whole has carried the brunt of this bloody war. But Aleppo, Syria's second largest city and its cultural and financial center, has been at the center of the most intense fighting in recent weeks. The fall of Aleppo will be a key gain for the regime and its backers. But it will deepen the already tragic humanitarian situation on the ground and force tens of thousands of new refugees to move toward Turkey. Above all, it will embolden the Assad regime in the face of the indifference of the world toward the most cruel and brutal war in recent times.

The U.N. Security Council Resolution 2254, adopted on Dec. 18 2015, was supposed to lay out a new framework and a certain timetable to end the war, bring humanitarian aid and begin the process of political transition to a legitimate, democratic and all-inclusive government in Syria. It was also supposed to help the fight against DAESH.

It did not achieve any of these goals as the regime continued to attack opposition targets and civilians in Idlib, Aleppo and the rest of the country with Russian support from air and Shiite militia groups on the ground. The Munich agreement for the "cessation of hostilities" accepted on Feb. 11 was supposed to prepare the ground for the U.N.-led talks in Geneva. While it has reduced the level of violence in late February and March, things are now getting worse again by the day. In addition, there has been little progress in the fight against DAESH in Syria and Iraq.

As U.N. officials confirm, the Assad regime has consistently violated the UNSC Resolution 2254 and the Munich Agreement to this day. It has continued to bomb civilian and opposition-held areas in Idlib, north of Latakia and Aleppo, killing hundreds of civilians and disallowing humanitarian aid to reach those in need.

Now, the regime is concentrating its attacks on Aleppo. It is targeting schools, bakeries, hospitals and roads with the aim of punishing civilians in opposition-held areas. This is a typical Russian tactic: Bomb not only the combatants but also their families, homes and towns so that they will give up fighting without actually firing a bullet. The opposition has stood up to this indiscriminate killing. But there are no more safe areas in and around the ancient city of Aleppo. Without any hope in sight, Aleppo is becoming another ghost city. Its near-total destruction is a tragic sign of the failure of the international community to save Syria and its people.

Since the beginning of the Syrian war, many have said that there is no military solution in Syria. But the Assad regime, Russia and the Shiite militia groups that support the regime in Damascus have proved the opposite to be true. They have used every form of military power including chemical weapons, cluster and barrel bombs and airstrikes, to change the course of events. The U.N. diplomatic initiative led by the U.S. and Russia is manipulated to prolong the life of the Assad regime and secure the political calculation of its backers.

In the meantime, DAESH continues to hold on to the areas under its control. The politics of diversion and delay in the U.N.-led Geneva talks is helping this terrorist group recruit new members and expand its spheres of influence. The coalition airstrikes are certainly limiting its operational capabilities in certain parts of Syria and Iraq. But the main body of DAESH appears to remain strong enough to launch new terrorist attacks.

A case in point is the Turkish city of Kilis near the Syrian border where DAESH rocket attacks have killed 21 people. Turkish armed forces have bombed DAESH targets across Kilis, eliminating dozens of DAESH terrorists. They have been helped by coalition air forces. Turkey will continue to do whatever is necessary to stop these rocket attacks.

But the simple fact is that as long as the Assad regime remains in power and continues its war of attrition under the guise of peace talks, DAESH will remain an effective force on the ground. The two monsters of the Syrian war, i.e., the criminal Assad regime and the terrorist DAESH, feed off each other and share the crime of destroying Syria and its people.

What the Assad regime is doing to Aleppo and its historical heritage is no less barbaric than what DAESH did to Palmyra last year. Its indiscriminate killing of women and children, doctors, nurses and aid workers is nothing short of war crimes and crimes against humanity.

This is a replay of what happened in Bosnia in the 1990s only in a more destructive and inhumane way. The inaction of the world to stop the Bosnian genocide then remains a dark spot in modern history. The indifference shown to the suffering of the Syrian people will go in history as a deeper shame for humanity.

The fall of Aleppo will be more than a matter of losing a city. It will be the crushing of the last hope of the Syrian people for peace, freedom and dignity. It will be handing the bloody Assad regime another cowardly victory. But more tragically, it will send a painful message to the people of Syria that they are left on their own.

If the U.N., U.S. and Russia are really serious about stopping this monstrosity, they have to first stop the Assad regime from undermining whatever is left of the hope to bring peace, security and prosperity to Syria. Talks in Geneva are of no meaning when barrel bombs and airstrikes burn and destroy everything in Aleppo.

Presidential spokesperson for the Republic of Turkey
Last Update: May 11, 2016 1:07 am
RELATED TOPICS