Socrates, wisdom and our modern follies 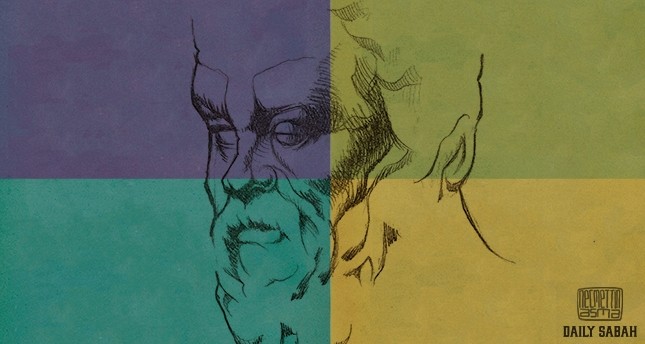 Illustration by Necmettin Asma - twitter.com/necmettinasma
by İbrahim Kalın Jun 18, 2016 12:00 am

We need to seek the truth and live by it. We have to shake off our modern pretensions and arm ourselves with knowledge, wisdom, compassion and humility. We ought to treat the world as a trust given to us, not as an end in and of itself

On May 22, 2012, the ancient Greek philosopher Socrates was acquitted in a symbolic retrial in Athens. A panel of 10 judges from Europe and the U.S. heard the case from Greek and foreign lawyers to decide whether Socrates was guilty of impiety and corrupting the youth. Even though the judges were evenly divided, this saved Socrates from punishment according to ancient Greek law.Accused of corrupting the youth and believing in deities not recognized by the Greek authorities, Socrates, the greatest sage and philosopher of Ancient Greece, said in his defense that the accusations against him were false and the reason why he was put on trial was not because he was misleading the youth about metaphysics, but because he was showing that people of power and pretension in fact did not know anything. After winning every debate, Socrates always repeated what came to be known as Socratic irony: "The only thing I know is that I do not know anything."This critical questioning cost Socrates his life in 399 B.C. when he drank the poison prepared for him while in his prison cell, sending his devoted students and friends, including Plato, Crito, Xenophon and Phaedo, into tears, pain and agony. But it also proved the power of the principles for which Socrates lived and died. Despite his followers' insistence, Socrates rejected any plans to escape from prison and accepted his end as divinely ordained destiny. Even in his last hours, he was telling the proud and corrupt inhabitants of Athens that they did not have real knowledge and wisdom but only pretension and pride.

The hubris of modernity carries striking resemblances to the folly of Ancient Greece that executed its greatest mind. It is not only intellectual arrogance, but also epistemic imperialism to claim to know everything there is to know about the universe and the meaning of human life. The truth is that while we have the most advanced technologies and economic means in human history, millions go to bed hungry every day, refugees flee their homes, innocent people die in mindless wars and injustice and inequality reign high. Those who question the modern status quo are given a treatment similar to the once accorded to Socrates.

The accusations against Socrates were reflective of the fears of the ruling class of the time. They were afraid that this knowledgeable and persuasive teacher was inculcating a new notion of ethics among the youth and that this was certain to expose their false pretensions to power, status and dignity. If not stopped, this was likely to lead to a new intellectual and political movement and upset the status quo. In fact, one of the suspicions about Socrates was that he was secretly allying himself with Sparta, Athen's greatest rival, and plotting an uprising with some of his students.

Yet, like a "gadfly that keeps agitating a big horse," to use his own analogy, Socrates kept questioning the pretensions and presumptions of the society in which he lived, hoping that the people would value and make use of his knowledge and wisdom to find the truth and lead good and virtuous lives. Yet it was Socrates's daring to pull down the curtain before the theater of false knowledge, immorality and injustice that led to his execution.

"The effect of these investigations of mine, gentlemen, has been to arouse against me a great deal of hostility," Socrates said. This was the source of all the outrageous claims against him. He further explained: "A number of young men with wealthy fathers and plenty of leisure have deliberately attached themselves to me because they enjoy hearing other people cross-questioned. These often take me as their model, and go on to try to question other persons,"

As displayed vividly in Plato's "Dialogues," Socrates developed some of the finest methods of self-examination and cross-questioning. His goal was not to ridicule anyone, but to show that only God possesses true wisdom and we mortals can only aspire to have a share in it. To say that "the only thing I know is that I don't know anything" is the highest form of wisdom because it shows the difference between true and false knowledge - a key element in order to live by the truth.

The principle of Socratic irony also implies that only true knowledge and wisdom can lead to right action. The most important condition of being a good human being is to possess the right kind of knowledge and act accordingly. Socrates formulates this with a key definition: "Virtue is knowledge." There is no virtue without the knowledge of the truth. If we want to lead a good life in the moral sense of the term, we have to know the truth. Morality begins with intellectual uprightness.

What follows from this is a revolutionary idea of the Socratic tradition, that no human deliberately does wrong. People do wrong when they do not know the truth, i.e., the true meaning of good and evil, right and wrong. No murderer kills while believing that murder is bad. He has to find a way to justify his murder in his mind before committing such a heinous crime. But if someone is really convinced of the evil of murder, he can never commit it. Socrates believed that even the most ignorant and evil person can be taught the good so that he will refrain from committing any moral sins.

In the present in which we live, we claim moral superiority over the societies of the past and see ourselves as marching toward a more mature and noble state of humanity. Yet the reality is that we keep producing some of the greatest injustices and deadliest weapons in recorded human history and seek to justify them in the name of realpolitik, national interest, profit or individual pleasure. Our claim to a higher state of humanity is denied by the countless breaches of justice, intelligence and compassion. We may pretend that we are the masters of the world but it is the desire to have the world that has enslaved our minds and will. The rush to possess the world has not elevated but downgraded our humanity. The result is a long list of human shame from colonialism and slavery to mindless wars, the Holocaust and rampant racism.

A humble dose of Socratic irony can help us recover a degree of sanity and moral integrity in our modern lives. Instead of posturing as the uncontested masters of the world, we should see ourselves as the modest servants of good and compassion. It will help us immensely to remember that the world of nature has been given to us as a trust, as the Quran says, and we are its protector, not its usurper. Returning the trust to its rightful owner unharmed is the sign of true dignity and nobility. As we enjoy the month of Ramadan and fast to tame our souls and seek proximity to God, we should all remember what is essential in our fleeting existence on this earth.

Socrates's last words at court were the following: "Now it is time that we were going, I to die and you to live, but which of us has the happier prospect is unknown to anyone but God." Socrates turned out to be the smart and happy one and his legacy went on to inspire the best minds and hearts since his execution 25 centuries ago.

Socrates kept teaching himself and his students until his last breath. His very last words after he drank the poison in his prison cell show his true character better than any argument. As he felt the effect of the poison on his heart, Socrates told Crito, his devoted student and friend: "We ought to offer a cock to Asclepius," and then died. Why did Socrates make such a request at the last minute of his life? Because it was a common custom among the Greeks to make an offering to Asclepius, the divine healer, after recovering from an illness. Socrates believed that the death he was about to meet was not an end, but an awakening into a new life, "life more abundantly." He was the teacher of truth in life as well as in death.

What do we need to lead a life of reason and virtue, "life more abundantly?" Simply put, we need to seek the truth and live by it. We have to shake off our modern pretensions and arm ourselves with knowledge, wisdom, compassion and humility. We ought to treat the world as a trust given to us, not as an end in and of itself. It is only with wisdom and humility that we will be able to get rid of such modern heresies as the violent extremism and terrorism of al-Qaida, DAESH and the like. It is only with true knowledge and honesty that we can eliminate all forms of racism and discrimination against Islam and Muslim communities living in the West.

It is only by overcoming our selfish egos and the pettiness of the world that we can realize the noble spirit within us.