From Srebrenica to Syria: Lessons not learned 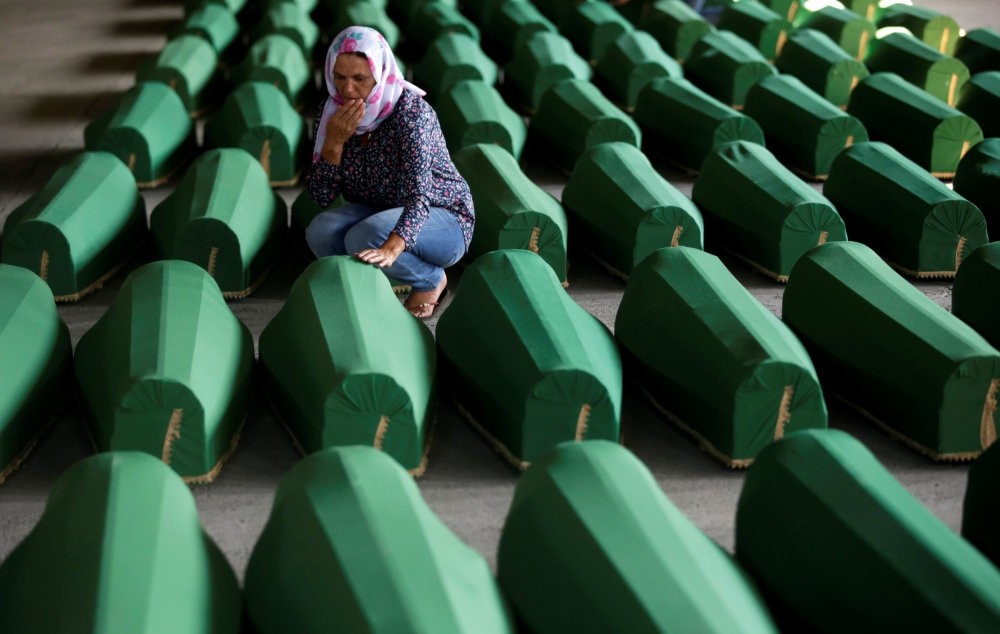 Muslim women crying amid coffins of their relatives, who are newly identified victims of the 1995 Srebrenica massacre, which are lined up for a joint burial in Potocari near Srebrenica, Bosnia-Herzegovina, July 9, 2016.
by İbrahim Kalın Jul 14, 2016 12:00 am

If the global community cannot remember how its deep silence led to the Srebrenica massacre, there will continue to be similar massacres in Syria

It has been 21 years since the Srebrenica genocide took place in eastern Bosnia under the U.N.'s watch. It was a failure of the international system of colossal proportions that led to the bloody murdering of more than 8,000 Bosniak men and children in a manner no different from the Nazi Holocaust of European Jews during World War II. A similar human tragedy is taking place in Syria where the war has entered its sixth year and the international system has opted to let it happen again under the watch of the U.N., Europe, the U.S. and the rest of the world. What connects Srebrenica, the largest massacre at the heart of Europe since World War II, and Syria, the deadliest war in recent memory, is the collective failure of the international system to stop war, state terror and human suffering.

In July 1995, thousands of Bosniak families were separated from their husbands and children by the Serbian military forces under the order of Ratko Mladic, also known as the "Butcher of Bosnia." They were going to be safe in U.N.-declared safe areas, they were told, and Srebrenica, along with Goradze and Zepa, was one of the three safe areas in eastern Bosnia. The U.N. and other officials bought the Serbian story on the grounds that it would help achieve a peace deal. But the Serbs had made it clear that they were going for what Radovan Karadzic had openly called the "ethnic cleansing" of Bosniak Muslims.

French General Philippe Morillon made those who fled to Srebrenica the following promise: "You are now under the protection of the U.N. I will never abandon you." But around the same time, Karadzic told the Serbian assembly that when the Serbian army entered Srebrenica, there would be "blood up to the knees." And that is exactly what happened.

The so-called peace talks went on without any hope for Bosniaks, but the Serbian plan devised and executed by Serbian President Slobodan Milosevi, Karadzic and Mladic moved forward. While the Serbian political leaders shook hands with U.N., European and American officials in the comfortable halls of European capitals, the Serbian army was getting closer to achieving its not-so-secret goal of annihilating the Bosnian Muslim population in all of eastern Bosnia. In the rest of the country, thousands were perishing under Serbian mortar and sniper fire on the one hand, and a crushing arms embargo on the other.

It is established now that at least two of the intelligence services of the five permanent members of the U.N. Security Council knew about the Serbian plans to kill everyone in the "safe zone" enclaves. Several military officials warned the U.N. about the looming danger in May and June of 1995. Their warnings went unheeded. The UNPROFOR, the U.N. mission in Bosnia, and the Dutch soldiers charged with protecting the civilian population in Srebrenica watched as the Serbian army sent more than 8,000 men and boys into killing fields. The result was one of the darkest pages in the history of modern Europe - a genocide that should haunt Europe, the whole U.N. system and the world for years to come.

Have we learned the lessons of the Srebrenica genocide and the Bosnian war? Looking at the conflicts and massacres since then, the answer is hardly in the affirmative. Have those responsible for this abominable crime against humanity been brought to justice? Again, the answer is somewhat equivocal. Milosevic died in prison in 2006, Karadzic found guilty of genocide and Mladic, captured after 14 years on the run, is awaiting his verdict. Perhaps this is justice served. But the real moral and political lesson of the Srebrenica genocide is to make sure that such abominations never happen again.

But such atrocities are taking place two decades later in Syria. Bashar Assad's regime in Syria is killing people in the thousands, violating all international conventions and committing war crimes and crimes against humanity. The international system that is supposed to protect civilians is taking rather an indifferent approach to the suffering and total destruction of the Syrian people in the name of realpolitik and strategic balancing. From the U.N. to NATO, the whole body of international institutions is repeating the mistakes of the Bosnian genocide.

While endless talks and initiatives continue for an endgame scenario Syria, the "reality on the ground," the motto of the realpolitik paradigm, is the fact that a nation is butchered and a country destroyed. Last year, Muhamed Sacirbey, a former foreign minister of Bosnia-Herzegovina and Najib Ghadbian, a special representative to the U.S. and the U.N. for the Syrian opposition, drew parallels between the wars in Bosnia and Syria and argued that "a Syrian no-fly zone will save lives and help end the conflict." They further said that "the intervention in Bosnia saved lives. It dampened extremism. And it ultimately brought the conflict to an end. Intervention - in the form of a no-fly zone - could offer similar benefits in Syria by stopping what is now the leading killer of Syrian civilians: Assad's barrel bombs."

Reading this, one immediately thinks of the dark specter of safe areas in eastern Bosnia. But doing nothing and repeating what has proven to be an empty and costly process in Syria is not a solution either. More than 8,000 lives in Srebrenica and many others in the rest of Bosnia could have been saved if the international system had acted differently in the 1990s. A similar tragedy is unfolding in Syria. How many more people will have to die before we say with a clear conscience that we have learnt a lesson or two from Srebrenica after two decades?

Presidential spokesperson for the Republic of Turkey
Last Update: Jul 14, 2016 9:18 am
RELATED TOPICS