No one is safe until everyone is 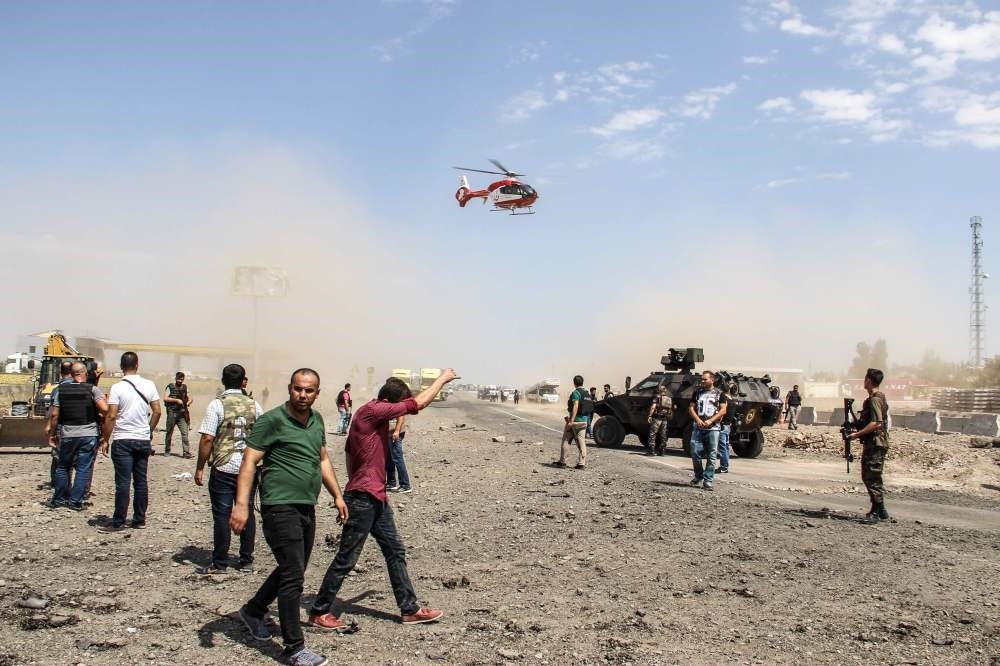 An ambulance helicopter landing as Turkish police officers and rescue personnel search the site of a car bomb explosion by the PKK on Aug. 15 in Turkey's southeastern city of Diyarbaku0131r. (AFP Photo)
by İbrahim Kalın Aug 21, 2016 12:00 am

Just as Turkey supports the fight against DAESH terrorism, which is a global threat to us all, it is also legitimate for Turkey to expect its friends and allies to support it in its fight against the PKK and FETÖ

As Turkey reels from the bloody, July 15 coup attempt, it is now faced with the three security threats of the PKK, DAESH and the Gülenists Terror Group (FETÖ). It is in the interest of Turkey's friends and allies to stand by the country because Turkey's security is key to their security. A key lesson of hypermodernity and globalization is that no one is safe and secure until everyone is safe and secure.

Turkey has been fighting against the PKK for several decades. The misguided policies of the past contributed to the rise of PKK terrorism and prepared the ground for the emergence of a belated Kurdish nationalism. President Recep Tayyip Erdoğan took a number of bold steps and major political risks as prime minister to bring an end to the armed conflict. He increased public investments in majority Kurdish-populated areas, recognized Kurdish identity, lifted the bans on the Kurdish language and most importantly gave Kurds a sense of equality and dignity like Turkish citizens. A primary goal of what came to be known as the reconciliation process was the disarmament of the PKK. Instead of disarming and despite calls from its imprisoned leader Abdullah Öcalan, though, the PKK stepped up its terrorist activities, recruited new members and carried out violent attacks in urban centers. The pro-Kurdish Peoples' Democratic Party (HDP) entered Parliament with the promise of helping the reconciliation process. Instead, it became a mouthpiece for the PKK and never dared to even condemn its most heinous terrorist attacks. The HDP has not taken any serious initiative for the PKK's disarmament. Instead, it has chosen to seek ways to soften the criticism of the PKK and villify Erdoğan.

President Erdoğan announced on several occasions that the reconciliation process was on hold and that the only way to move forward was for the PKK to lay down its weapons. As things stand today, the PKK's main concern is not to solve the Kurdish issue, but to justify its existence as a terrorist organization. No democracy would allow a terrorist group to exist while seeking a peaceful solution to a problem. What the PKK and its political representatives present as the Kurdish issue has nothing to do with real Kurdish issues. Rather, it presents its own agenda as that of the Kurdish citizens of Turkey. This is simply not true. We have a PKK problem that kills both Turks and Kurds without discrimination. Over the last week alone, the PKK killed scores of security forces and civilians in carbombings and roadside attacks in Diyarbakır, Van, Elazığ and Bitlis.

Instead of calling on Turkey to treat the PKK as if it is a benign civil society organization, Europe and the U.S. must see the PKK for what it is, condemn its terrorist attacks without ifs or buts and stop its financial operations and propaganda in European cities. It is a huge mistake and strategic miscalculation to support the Democratic Union Party (PYD), the PKK's Syrian affiliate, and its People's Protection Units (YPG) militia in the name of fighting DAESH in Syria.The PKK is simply using the Syrian civil war as a smokescreen to continue its terrorist activities.

As the Syrian war drags on, Bashar Assad's regime continues to attack civilians, including women and children, in Damascus, Aleppo and the rest of the country. Pictures of new atrocities emerge every day and the silence of the world reaches new heights of shame. The two monsters of the Syrian war, i.e., the Assad regime and DAESH, feed off each other. There is no solution to completely eliminate the DAESH menace without ending the war in Syria, and there is no end to the war without Assad out. Sharing a 711-kilometer border with Syria, Turkey carries the bigger burden. Of course, it is the Syrian people who suffer the most.

Turkey has done more than many other countries in the fight against DAESH. In addition to being part of the anti-DAESH coalition and opening its air bases to coalition jets, Turkey has arrested, deported or denied entry to more than 50,000 DAESH members and/or people suspected of links to DAESH. Turkey increased border security amid floods of refugees from Syria and its border cities have become targets for DAESH rockets. DAESH has also launched attacks in Ankara and Istanbul, killing hundreds of innocent people.

As in the fight against the PKK, Turkey has received little help. Instead of tightening their own security and sharing intelligence, some European countries have criticized Turkey for not catching DAESH terrorists or suspects who hail from Europe. How is Turkey supposed to know about terrorists of European origin if the source countries do not fulfill their duties in the first place? Several DAESH terrorists carried out attacks in France and Belgium after they were deported from Turkey.

DAESH cannot be defeated without containing the larger context in which it operates. The civil war in Syria and the effect of failed states and weak governments in Afghanistan, Iraq, Libya and elsewhere provide ample ground for DAESH recruitment and propaganda. Despite these mounting challenges, Turkey will continue to fight against DAESH terrorism politically, ideologically and militarily.

Finally, Turkey is faced with FETÖ terrorism as was displayed most brutally on July 15. The power capacity of Gülenists in Turkey has been largely dismantled, but there is more work to do. Seeing their demise in the country, Gülenists are now using their resources to run smear campaigns against Turkey abroad. Turkey's friends and allies in Europe, the U.S., Middle East, Africa, Asia and the rest of the world must be vigilant against these campaigns and pay attention to the dark side of the Gülenist cult.

Just as Turkey supports the fight against DAESH terrorism, which is a global threat to us all, it is also legitimate for Turkey to expect its friends and allies to support it in its fight against the PKK and FETÖ. The fight against terrorism cannot succeed without taking a clear and consistent stance against all of its forms. The rhetoric of my terrorist versus your terrorist only plays into the hands of terrorists. Security is a key asset for all and works only when it is available to everyone.