Daesh, Dabiq and the follies of an apocalyptic ideology 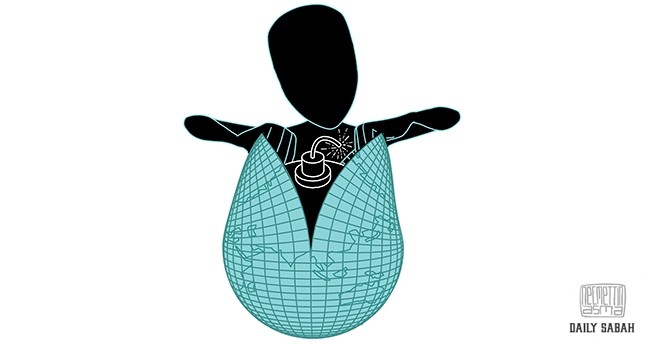 Illustration by Necmettin Asma - twitter.com/necmettinasma
by İbrahim Kalın Oct 18, 2016 12:00 am

The key stakeholders including global powers, regional players and non-state actors must stop using Daesh for their small strategic gains because this is becoming a war in which there are no winners. Two wrongs do not make a right

Supported by the Turkish Armed Forces (TSK), the Free Syrian Army (FSA) took the town of Dabiq from Daesh on Oct. 16, dealing another blow to Daesh under Operation Euphrates Shield (OES), which began on Aug. 24. Besides losing significant territories along the Turkish-Syrian border in less than two months, Daesh is also facing a growing problem of legitimacy - a key component of its perverted ideology centered on an apocalyptic story about Dabiq.

Turkey began the OES to clear its border of terrorist elements. Since its launch, the OES has liberated several key cities including Jarablus and tens of towns and villages, all occupied by Daesh, along the Turkish-Syrian border between Azaz and the Euphrates River. Despite losses, the FSA has been moving steadily into Daesh-held areas and forcing it into al-Bab and Raqqa, the two remaining strongholds of the terrorist group in Syria. The OES proved to be an effective campaign against Daesh in Syria: it secured areas from terror, boosted the morale of the FSA, encouraged moderate groups to join forces and allowed thousands of Syrians to return home. Furthermore, it also demolished the much-circulated myth that the Democratic Union Party (PYD) and People's Protection Units (YPG), the PKK's terrorist Syria branches, are the only effective force on the ground against Daesh. It showed that if supported properly, the FSA and other moderate opposition groups can effectively fight Daesh and establish peace and public order.

There is a clear message here to the international community that has failed the moderate opposition groups not once but many times since the beginning of the Syrian war. Instead of keeping its promises to the Syrian opposition, the international coalition led by the United States kept changing its policy on the future of the Assad regime and the Syrian war. The support not given to the various Syrian opposition bodies including the Syrian National Council, the High Negotiation Council and the FSA over the last four years prepared the ground for the rise and spread of Daesh in Syria. It will be sufficient to remember how Daesh was born in Iraq, established itself there and eventually captured Mosul, Iraq's second largest city, as a result of the disastrous occupation of Iraq in 2003 on the one hand and the sectarian policies of the Maliki government between 2010 and 2013, on the other. Alienated, humiliated and oppressed by a hostile government and its unruly militia groups, Sunni tribes and ordinary citizens in Mosul watched Daesh enter their city in 2014 while the 65,000-strong Iraqi army left the city without firing a single bullet. This not only gave Daesh a safe haven but also further poisoned Sunni-Shia relations. Many have now similar fears about the Mosul operation that has just began.

Looking forward, Turkey is determined to continue the OES until it clears its border from all terrorist elements and ensure the safety of its citizens and those of Syria along the Turkish-Syrian border. This is what is happening in the safety corridor from Jarablus to Azaz where life is getting back to normal and the Syrian people, at least those living in these areas, feel respected and protected - a glimmer of hope at a time when the world seems to have forsaken the people of Syria for proxy wars and geopolitical muscling.

The loss of Dabiq is a military defeat for Daesh. But more importantly, it is a major blow to its perverted ideology because Daesh believes that Dabiq is where a doomsday battle, an Armageddon in the Christian eschatology, will take place. Based on a suspect report about the end of times, the Dabiq story claims that a group of true believers, in this case Daesh, coming from the city of Medina will defeat the forces of evil and infidelity and capture the city of Istanbul. It is only after this major battle that the day of judgment will arrive. That is why Daesh has named its English magazine Dabiq and its Turkish version Konstantiniyye, the old name of Istanbul before Fatih Mehmet the Conqueror made it part of the Ottoman Empire in 1453.

A cursory look at these publications reveals a disturbing but also telling picture. The Dabiq magazine distorts key Islamic concepts in a monstrous way and engages in pure propaganda for recruitment and self-glorification. It shows the terror group's passionate and eventually foolish search for legitimacy. The magazine, which has published 15 issues since its first appearance in July 2014, claims to be based on Divine unity (tawhid), the proper path or method (manhaj), migration (hijrah), jihad, and community (jama'ah). Produced professionally, it seeks to make legitimate its claim to the caliphate and calls on Muslims to migrate there. It uses cheap propaganda tactics and attacks Jews, Christians, Shiite Muslims, the Muslim Brotherhood and eventually all Muslims not buying their perverted ideology.

It turns everything upside down and eventually becomes a self-defeating nonsense. First of all, unity, the cornerstone of the Islamic faith, does not mean uniformity and never justifies the killing of innocent people including other Muslims. Anyone who knows anything about the Prophet of Islam would know that the so-called "method" of Daesh has nothing to do with his life and teachings. Daesh uses the historic migration of the Prophet of Islam from Mecca to Medina to justify its claims for recruitment but this is also totally false. The Prophet migrated from Mecca to Medina in 622 to flee oppression and persecution while Daesh is inflicting nothing but oppression and persecution on people under its rule. In Medina, the Prophet and his followers laid the foundations of the later Islamic civilization while Daesh has done nothing but engaged in terrorism pure and simple in Muslim and Western countries. The terror group also abuses the concepts of jihad and community in total violation of both the canonical sources of Islam, i.e., the Quran and the Sunnah and the Islamic legal tradition.

As a matter of fact, the theological and juridical claims of Daesh have been fully rejected and demolished by the most prominent religious authorities of the Islamic world in an open letter addressed to Abu Bakr al-Baghdadi, the leader of the terror group, in September 2014. The letter, which can also be seen as a religious fatwa, proves point by point the fallacy of Daesh ideology and its claim to religious legitimacy. It shows how DAESH distorts religious concepts to construct an ideology of destruction - a modern construct no different than the other diabolical movements of the modern era. Last year, the Presidency of Religious Affairs (DİB) published a 40-page rejection of "Daesh as a movement of religious distortion and terrorism."

The work of de-legitimizing Daesh ideology should be continued by prominent Muslim religious authorities both in the Muslim world and the West. Muslims cannot let a group of barbarians hijack their religion and rich tradition for nothing but a worldly gain for distortion and destruction. Western countries should see Daesh for what it is and stop giving it ammunition by inflaming Islamophobia and anti-Muslim populism.

The fall of Dabiq is an important event but by no means the end of the story. Daesh is likely to give a fierce fight in al-Bab and Raqqa in Syria and Mosul in Iraq. Regardless, the fight against it must continue at the level of ideas, politics and military force. But the world has to ask itself how and why a coalition of more than 60 countries has failed to defeat this terror group to this day. One cannot help ask if this "failure" has something to do with the "use value" of groups like Daesh in the proxy wars of the 21st century and how it has become a convenient tool at the hands of players seeking to impose their notion of (dis)order on the Middle East and the larger Muslim world.

This question is also a painful reminder of the fact that the two monsters of the Syrian war, i.e., Daesh and the Assad regime, feed off each other and as long as they are left to survive, they will continue to feed the worst humanitarian crisis in Syria and beyond. It is important to defeat Daesh in Syria, Iraq and elsewhere. But this fight should not sow new seeds of conflict and division. The key stakeholders including global powers, regional players and non-state actors must stop using Daesh for their small strategic gains because this is becoming a war in which there are no winners. Two wrongs do not make a right.

Presidential spokesperson for the Republic of Turkey
Last Update: Oct 18, 2016 9:42 am
RELATED TOPICS