Defeating Daesh is not impossible 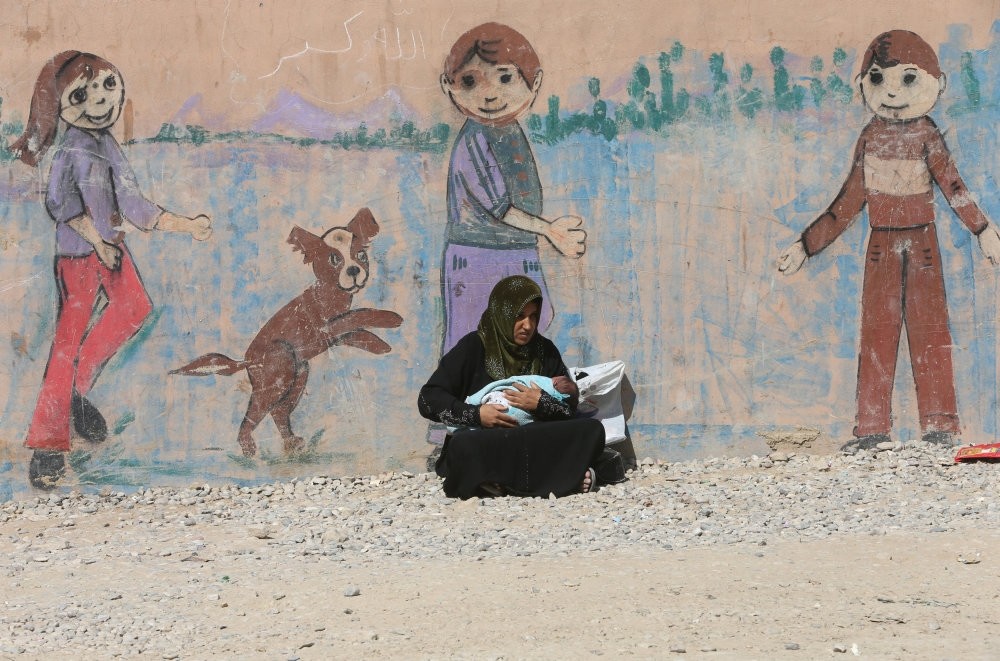 A displaced woman, who fled from Daesh terrorists in Mosul, holding her baby at Deepaka camp in the northwest of Irbil, during an operation against Daesh in Mosul, Iraq, Oct. 20, 2016.
by İbrahim Kalın
Oct 22, 2016 12:00 am

Daesh rose to prominence because of a series of mistakes committed in the name of political opportunism, communal/sectarian dominance and proxy wars. Avoiding those mistakes of the recent past is key to defeating Daesh

For the last several months, Daesh has been on the run in much of the territories it controls in Syria and Iraq. With the fall of Dabiq and the beginning of the Mosul operation, it is under more pressure than ever. After all, defeating Daesh militarily might be easier than initially thought. But this is only one part of the story. There is more to do to defeat Daesh and its perverse ideology. More importantly, what led to the rise and spread of Daesh may lead to its revival anytime.

Daesh was born in Iraq after the American invasion of that country in 2003 with the claims that Iraq had weapons of mass destruction - a claim that turned out to be phony. It grew in strength under the sectarian policies of the Maliki government. The failure of the international community to protect the Syrian people against the barbaric assault of the Assad regime gave Daesh what it needed to turn into an even deadlier terrorist organization. Led by a perverted ideology of death and destruction, it manipulated the feelings of loss, injustice and oppression. While the world powers and regional actors fought their petty and extremely costly proxy wars over Iraq and Syria, Daesh constructed an image of indestructability.

Terrorist organizations like Daesh will not just disappear as we may wish. It will take serious effort, coordination and commitment to contain and neutralize the virus of such groups. But the recent gains against Daesh in Jarablus, Azaz, Munbij and Dabiq in Syria prove that it is not invincible after all. The Mosul operation, led by the Iraqi forces including the peshmerga and the international coalition and supported by Turkey, is expected to deal a major blow to it. But any mistake in Mosul has the potential to make Daesh stronger elsewhere not weaker.

The reason is that the conditions that produced Daesh in the first place are still largely there. The lack of coordination in the fight against terrorism, the continued carnage of the Assad regime, sectarian policies, crimes of non-state actors and a number of other causes remain as key factors that Daesh exploits to its advantage. We should also note the fact that Daesh is a useful tool at the hands of anti-Muslim racists and Islamophobes who exploit the fears of Western societies through the threat of Daesh and its image as an invincible and omni-present evil.

As I discussed here, Violent extremism is a global phenomenon and has many causes. It can be motivated by religious, secular or nationalistic ideas. It is also related to the socio-political circumstances in which individuals react to what they consider to be great injustice and oppression. Wars, internecine fighting, civil wars, tribal hostilities, failed states and a host of other factors play a role in the rise and spread of violent extremism. There is more than one reason for the emergence of violent extremism and we need to adopt an integrated approach to understand its causes and operate at several levels to contain and prevent it.

Such an approach requires work mainly at two levels: the level of ideas and the level of facts. Violent extremism as an idea is a driving force for various terrorist groups from Daesh and PKK to the ETA and anti-Muslim Buddhist nationalists in Myanmar. Fighting against them requires a battle of ideas where attempts to justify terrorist methods are rejected based on authentic and authoritative sources. In the case of Daesh, Muslim scholars and religious leaders have debunked its extremist ideology and shown the fallacy of their logic. A good example of this effort is the letter to Abu Bakr al-Baghdadi, the leader of Daesh, by a large number of prominent Muslim scholars and academics in 2014. Numerous other scholars and community leaders have rejected Daesh's extremist ideology and its futile attempts to justify its barbaric ideology.

Rejecting Daesh's methodological base, however, is not enough. One needs to show how they distort and hijack the core message of Islam. Indeed, Daesh's ideology and practice is diametrically opposed to the beliefs and ways of life of more than 1.7 billion Muslims around the world. But a small group of extremists are still able to misuse religion to justify their savagery. Obviously, this is not a particularly Islamic problem. Judaism, Christianity, Buddhism and other religions have been subject to similar violations and extremist interpretations. From Baruch Goldstein to Andres Breivik, many have carried out terrorist acts in the name of their religion, country and/or ideology.

The key challenge is to fight the monster without becoming one. Daesh has been allowed to become such a monster as a result of a number of failed policies in recent years. As Turkey's Euphrates Shield Operation, begun on August 24, has shown, an effective fight against Daesh is possible by supporting legitimate opposition groups and by committing necessary political, military and intellectual resources. All indicators show that it is not impossible to defeat Daesh and its likes.

Daesh rose to prominence because of a series of mistakes committed in the name of political opportunism, communal/sectarian dominance and proxy wars. Avoiding those mistakes of the recent past is key to defeating Daesh.
Last Update: Oct 22, 2016 11:16 am