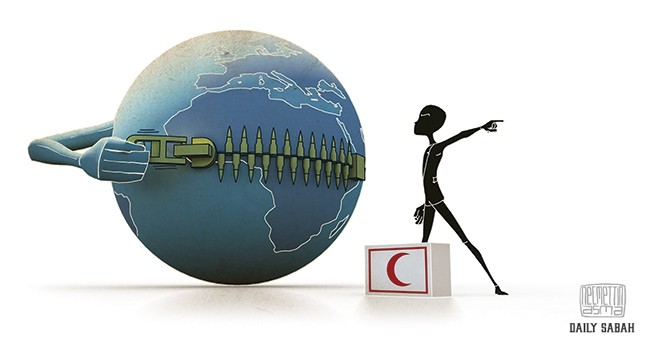 Thousands of men, women and children in Aleppo are still waiting in the freezing cold without food and medical supplies, all the while not knowing if an aerial attack or a militia group is round the corner

The cease-fire agreement brokered between Turkey and Russia over eastern Aleppo is hanging by a thread. It is probably the last hope for thousands living in the besieged city, including women and children, who have been reduced to sitting ducks to be hit by barrel bombs or executed by militia snipers. The fall of Syria's 5,000-year -old city of Aleppo and the brutal destruction at the hands of the Assad regime should have shaken the world to its core. Instead, horrifying images of human suffering that are broadcast live via social media have gone unnoticed once again and our so-called civilized world has plunged to the deepest depths of depravity, barbarity and shame.

Having witnessed the deafening silence of the world in the face of the atrocities committed in Aleppo, Emine Secerovic Kasli, a survivor of the Bosnian war who was just eight or nine years of age at the time of the war, has said that during that dark chapter of history she recalls thinking that the world would come to help if they only knew what innocent people were being subject to. Now, she says she was "so naive,» pointing out that the world knows what is happening on the streets of eastern Aleppo yet does nothing to stop this genocide. As I write these words, evacuation buses were going in and out of Aleppo and being suspended, attacked and overburdened with uncertainty. What is certain, however, is that the Aleppo massacre will be remembered as a monument of shame just like the Holocaust, Srebrenica and Rwanda.

One year ago, when raw images of the young Syrian boy Aylan Kurdi whose dead body washed up on a Turkish beach on the Aegean shore galvanized public opinion around the world, there was some hope that the rich and powerful world powers in Europe and the U.S. would intervene to stop the suffering faced by thousands of Syrian refugees and internally displaced people in Syria. Similar expectations arose when images emerged of the young boy Omran Daqueesh, another Syrian boy whose ash-covered body and bloodied face were seen frozen in an eerily calm expression on social media in an image taken in an ambulance as medics cleaned blood and ash from his face in eastern Aleppo, horrified the world. However, sympathy and compassion have a short lifespan in modern communities and states have rendered themselves shorthanded and coldhearted. It looks like no picture, footage or evidence of human suffering will be enough to move the world to do the right thing.

While trying to shoulder the moral and psychological toll of this horrible war, we also have to deal with the cold-blooded facts of real-politick. The Turkey-Russia brokered ceasefire agreement came after weeks of intense negotiations in Ankara involving several parties. The goal was and is to get the people of eastern Aleppo, who have been under heavy regime attack, to safe areas such as Idlib near the Turkish border. Around 10,000 people have been evacuated so far but there are thousands more waiting to leave. The International Committee of Red Cross, Turkish Aid and Disaster Agency (AFAD), Turkish Red Crescent, the IHH and other non-governmental organizations (NGOs) are working day and night to bring food, clothing and medical supplies to Syrians who recently arrived to Idlib where there are already hundreds of thousands of internally displaced civilians.

The cease-fire agreement remains a fragile process with multiple dynamics on the ground. Feeling emboldened by its victory in east Aleppo, the Assad regime and its supporters including the militia groups on the ground backed by Iran may seek to get revenge on the opposition groups, possibly sabotaging the cease-fire agreement and the evacuation process in the days to come. President Recep Tayyip Erdoğan spoke with Russian President Vladimir Putin several times to ensure that the remaining people of Aleppo will be evacuated without further delays and without more killing and suffering.

The U.N. remains incapacitated in the face of the shameful human tragedy unfolding in Aleppo. No one is really expecting anything from this international body whose resolutions and statements do not prevent injustice or alleviate suffering. One would hope in the very least that even the slightest degree of human decency would come from an institution that purports itself as representative of the unity of nations. However, not even that will be granted to the suffering and dying people of Aleppo. If the U.N. and its powerful members of the European Security Council ever wonder why things have come to this point in Aleppo, they should go back and see what they have done to stop this war of attrition since 2012: practically nothing.

Turkey's call for the establishment of safe zones in Syria has fallen on deaf ears. The Obama administration swallowed its own red lines in the face of the use of chemical weapons and every unimaginable tool of war. Instead of blaming others and self-lamenting now, it could have done something to at least minimize the daily atrocities of the Assad regime and kept its promises to the Syrian opposition. But it has instead allowed the regime and its allies to buy time and change the course of the war to their advantage while «diplomacy» has done nothing to save the women and children of Aleppo and across Syria. The U.S. misguided policy of supporting the PKK›s Syrian offshoot the Democratic Union Party (PYD) has only further emboldened this terrorist organization and created rifts between Turkey and the U.S.

Two years ago on Nov. 18. 2014, I wrote the following: «It is a matter of time before Aleppo, the second largest city in Syria, falls to the hands of the Assad regime. While the American-led coalition airstrikes hit Daesh targets in Iraq and Syria, Mr. Assad continues his bloody attacks on Aleppo. Over the last two months, the Assad regime intensified its attacks on the city, expanding its control from air and land, and forcing the Syrian rebels further north…. Concrete action is needed on the ground before the fall of Aleppo becomes another dark spot in the Syrian war. If Aleppo is allowed to fall, it would be the loss of any hope for the future of humanity in Syria…»

We seem to have lost that hope already.

Presidential spokesperson for the Republic of Turkey
Last Update: Dec 20, 2016 11:46 am
RELATED TOPICS