Safe zones will save lives, our humanity 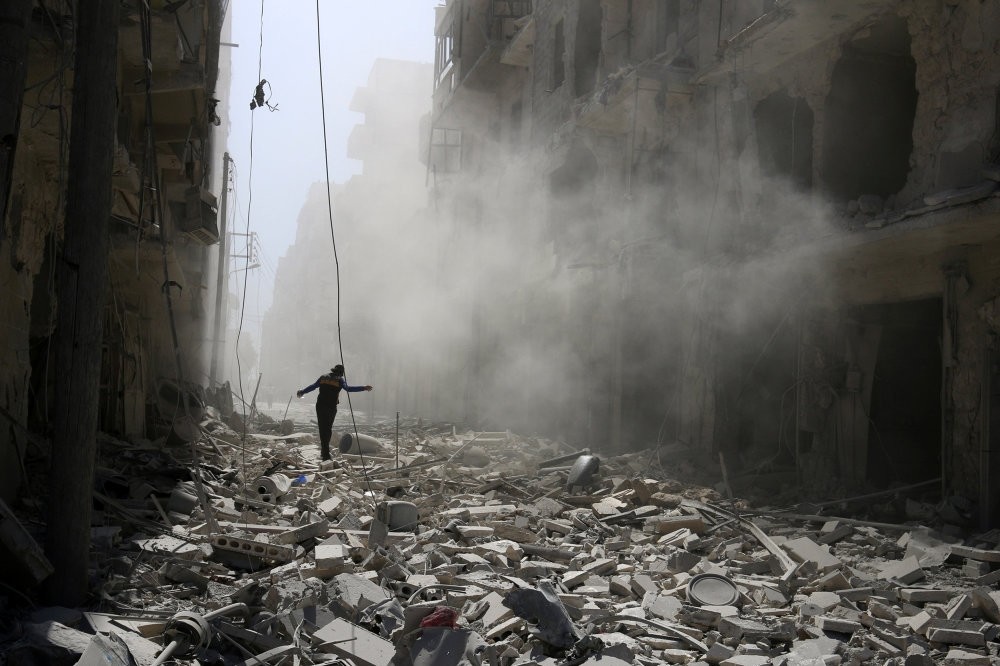 If the last five years of this brutal war have taught us anything, it is that establishing safe zones is the only viable option to stop these insane massive killings, destruction of cities and the flow of refugees in their thousands to Turkey and the rest of the world

Aleppo burns while the world watches. Turkey's call for safe zones in Syria is as urgent and life-saving as it has ever been. The inaction from the international community will only entrench the Assad regime's barbarism, spread the Daesh menace and lead to the loss of more innocent lives.

Since the collapse of a truce precariously put together by the United States and Russia on Sept. 9, hundreds of people have died in airstrikes by Bashar Assad's regime forces. On Sept. 25 alone, 60 people, many of them women and children, were killed in Aleppo. The historic city, a symbol of culture, art and trade and a human mosaic, has seen some of the heaviest air attacks since the beginning of the Syrian conflict in 2011.

It is clear that the goal of the Assad regime is to decimate the entire city and its inhabitants in order to destroy one of the strongholds of the opposition forces. This is a regime that has proved its capacity for cruelty and genocidal killing over and over again. It has manipulated every attempt at a truce, cessation of hostilities and/or political negotiation to win time and continue with its shock and awe strategy. With military support from Russia, Iran, Hezbollah and other militia groups, it is scorching the earth in Aleppo with tens of deadly airstrikes and barrel bombs every single day. Even the U.N. aid convoys were not spared the massacre. And the regime has done all this during the week of the 71st U.N. General Assembly, shamelessly defying and openly mocking the international community.

As I discussed here before, the U.N. Security Council Resolution 2254, adopted on Dec. 18 2015, was supposed to lay out a new framework and a certain timetable to end the war, bring humanitarian aid and begin the process of political transition to a legitimate, democratic and all-inclusive government in Syria. It was also supposed to help the fight against Daesh.

The Munich agreement for "cessation of hostilities" accepted on Feb. 11 was supposed to prepare the ground for the U.N.-led talks in Geneva. Not surprisingly, the regime has again used the talks to make advances in violation of all the agreements. As U.N. officials confirm, the Assad regime has consistently violated the UNSC Resolution 2254, the Munich Agreement and the Sept. 9 cessation of hostilities in a systematic manner. It has bombed civilian and opposition-held areas in Idlib, north of Lataika and Aleppo, killing hundreds of civilians and disallowing humanitarian aid to reach those in need.

There is no use in giving another "peace-excuse" to the Assad regime. The criminal gang in Aleppo is not interested in peace or political transition. They cannot even tolerate humanitarian aid being delivered to civilians. It is a folly to expect mercy from a monster.

Whatever the military future of this conflict, the international community must act to protect civilians in Aleppo and the rest of the country. The best way to do this is the establishment of safe zones for the civilian population. If the last five years of this brutal war have taught us anything, it is that establishing safe zones is the only viable option to stop these insane massive killings, destruction of cities and the flow of refugees in their thousands to Turkey and the rest of the world.

Safe zones will help protect civilians from the indiscriminate killing of both the Assad regime and DAESH, the two twin monsters of the Syrian war. It will help reduce the number of refugees and provide shelter for the internally displaced people. It will enable the U.N. and other institutions to coordinate their humanitarian aid work. It will also give a sense of hope to the Syrian people that they are not alone and the international community is there to protect them. It is in the interest of all stakeholders including the U.S. and Europe.

This is not an impossible goal to achieve. The political and military cost, if any, pales in comparison to the human suffering sustained by the Syrians and the utter failure of every single political process over the last five years. The so-called "complications" in establishing and maintaining safe zones in Syria appear to be excuses rather than real concerns. The fight against Daesh to the extent it has succeeded, has been no less risky militarily.

The gains of establishing safe zones will be huge: it will protect civilians, force the Assad regime to come to the negotiating table, reduce the number of refugees, empower the moderate Syrian opposition groups against the regime and Daesh in protected areas, and bring a degree of balance to the Syrian conflict.

It makes more sense both politically and morally to seek to establish safe zones in Syria than begging the criminal Assad regime for truce or peace. The international community has the means to realize this goal. It, however, lacks the political will and moral vision that has vanished from global politics in a regrettable and scandalous manner. The greatest moral outrage of our times can no longer be tolerated in the face of the death of our humanity along with the death of Syrian people.