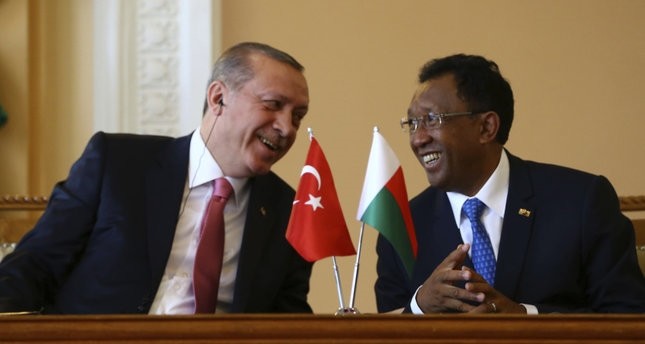 Rather than creating new relations of dependence, tutelage and exploitation as the colonial powers did, Turkey carries out a 'win-win policy' in Africa which is a policy of mutual empowerment based on equality, transparency and sustainability

On Jan.22-25, President Recep Tayyip Erdoğan visited the three east African countries of Tanzania, Mozambique and Madagascar. The visit, part of Turkey's ongoing "opening to Africa" policy started in 2005, seeks to expand and deepen Turkey's relations with the African continent as a whole.

Over the last decade as first prime minister and then as president, Erdoğan has paid more than 30 visits to 23 African countries in total – a record number of visits for a non-African leader. This is an indication of Turkey's strategic outlook on Africa as it develops new bi-lateral relations with African nations. Turkey expanded its diplomatic presence in Africa from a mere 12 embassies in 2004 to 39 in 2016. In 2012 and 2013 alone, Turkey contributed around $800 million to various aid programs in Africa.

The Turkish Cooperation and Coordination Agency (TİKA) has 16 offices in Africa, doing hundreds of projects around the continent from digging wells and opening clinics to training farmers and restoring historical sites. Tens of Turkish NGOs and aid organizations are also actively helping the needy. This new approach is reciprocated by the African nations. In 2008, the African Union enlisted Turkey as a strategic partner. The first Turkey-Africa Summit was held the same year in Istanbul, followed by the next Summit in Malabo, Equatorial Guinea in 2014.

The third Summit is expected to take place in Turkey in 2019. A decade ago, Turkey's total trade with Africa was less than $3 billion. Today, the trade volume has exceeded $25 billion. Turkish Airlines flies to about 40 points in more than 30 African countries – more than any other international airline in the world. More than 30 African countries have diplomatic missions in Turkey. More than 5,000 students from African nations have studied in Turkey with full scholarship. These numbers indicate a strong and steady trend of deepening ties between Turkey and Africa.

Africa has rich natural resources, a young and dynamic population and a huge potential for development. But it is also in Africa that you have suffocating poverty in the midst of immense wealth. Political stability, the fight against terrorism, poverty eradication and sustainable development are the major priorities for many African nations. Given the shameful history of European colonialism in the continent, one cannot be vigilant enough against th

Turkey follows a "win-win policy" in Africa. Rather than creating new relations of dependence, tutelage and exploitation, it focuses on political equality and mutual economic development. It seeks to help African nations in their wise policy of "African solutions to African problems." To this end, Turkey is implementing continent-wide programs to train African students and civil servants in various fields and provide assistance in ways that will empower rather than weaken African nations. This is what Turkey has done in Somalia since 2011 when it ran a worldwide campaign to help this forsaken African nation to deal with famine, drought, extreme poverty and terrorism. With public and private sectors, Turkey has provided over $1 billion in aid and investment. While Somalia still has a long way to go in terms of security and economic development, it is in much better shape than it was six years ago.African nations have responded in the affirmative to Turkey's win-win policy. High-level visits have increased in recent years. Turkish companies are undertaking major projects such as the 2,000-kilometer railroad project in Tanzania, building affordable social housing in Mozambique, building power plants in Madagascar, producing everything from cement and clothes to electronics in African countries, thus employing thousands of Africans in their own countries.

President Erdoğan personally leads the way in this new era. He not only visits African nations and receives their leaders in Turkey but also encourages businesses, universities, NGOs, research centers, tourism agencies and ordinary citizens to engage in mutually empowering relations. He builds mutual trust, confidence and benefit for all so that all issues are addressed in an open and candid manner.

It is as part of this approach that Turkey asks African countries to disallow the subversive activities of Gülenist Terror Group (FETÖ) individuals and institutions in their countries. Using Turkey's prestige and capacities, FETÖ has established itself in dozens of African nations over the last two decades. Now that their true identities have been exposed after the July 15 coup attempt, many African countries are taking positive steps against this menace. Our African brothers and sisters should know by now that this cult group is a matter of national security not only for Turkey but also for them as it will do everything to amass political power and use it against the very nations opening their doors and hearts to them.

Turkey's win-win policy in Africa is a policy of mutual empowerment based on equality, transparency and sustainability. Africa's huge potential for sustainable development will be realized only when new forms of modern slavery, exploitation and dependence come to an end and instead Africans are allowed to develop their own potential in ways that are in tune with the spirit and traditions of the African continent in the 21st century. Turkey's win-win approach to Africa should be seen as a humble yet important contribution to this precious goal.

Presidential spokesperson for the Republic of Turkey
Last Update: Jan 28, 2017 1:41 am
RELATED TOPICS