To be in the world but not of it 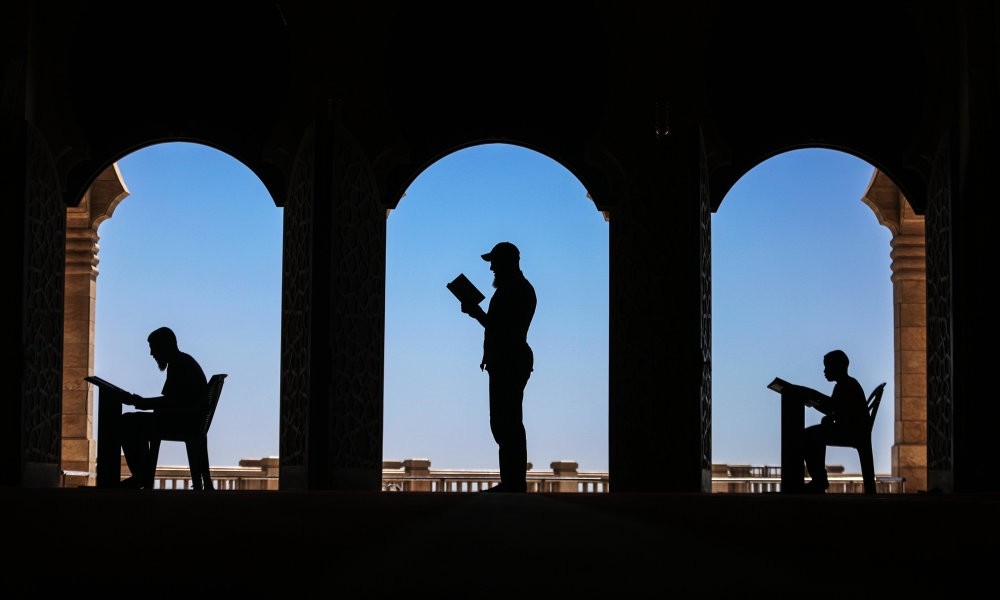 Palestinian Muslims reading the Quran in the Great Omari Mosque in Gaza during the holy month of Ramadan, June 3.
by İbrahim Kalın Aug 01, 2017 12:00 am

The intellectual and moral challenge before us is to be in the world but not of the world. It is to live in the world in a way that gives its due without either denying its existence or surrendering ourselves to it. It is to fully enjoy life while never losing sight of our ultimate goal in the world

One of the criticisms directed at Islam in the Western religious and Orientalist circles is that Islam is too worldly a religion compared to Christianity. Christian polemicists see Prophet Muhammad, in contrast to Jesus Christ, as too involved in the social and political affairs of the world. Hence the charge that Islam is not a religion but an ideology. These assertions are based on erroneous notions and false comparisons. Islam takes an attitude of non-attachment toward the world without denying its existence. The delicate balance is to live in the world in a meaningful way without becoming subservient to it.

It takes intelligence, wisdom and art to treat things as deeply serious and valuable in their own right but see them eventually as small and insignificant in view of God's creation plan and our place in it. The world is a veil and plaything; no human being should lose himself in it. Human intelligence and dignity is above the transient moments of the world. But as God's work of art, the world also unveils His grandeur, design and mercy. It serves as a sign, pointing to something larger and more significant than the sum total of its physical/material qualities. It can be a source of pain, suffering and violence but also wisdom, love, friendship and compassion. This brings us to the critical question that we should be asking ourselves all the time: How are we to live in the world in a serious and meaningful manner without surrendering ourselves to it?

This is not a merely conceptual question. It shapes the way we interact with the world around us. It forms the ways in which we build or destroy the world. It is a question that lies at the heart of all civilization – a question that the modern world does not know how to answer.

The classical Muslim thinkers and scientists took the physical reality of the world seriously but never considered it as having a self-fulfilling meaning in and of itself. They produced an advanced and scientifically sound study of the natural world, providing a detailed analysis of the physical properties of the universe. Yet this "world" that they studied so assiduously was not a self-explanatory and self-justifying reality. They studied the physical world within the larger context of what the Quran called hayat al-dunya, "life of this world" or "worldly life." This critical term can be rendered more properly as "life-world."

What is meant by "life-world" is not a thing but a context of relations, a realm of existence where the value-laden principles of good and evil take precedence over the physical and mathematical principles of material substances. The world is not merely a "thing" or "place" in which humans come to reside. It is primarily a moral space, a context of beliefs and attitudes that shape the human state. Our attitudes toward the world are informed by the relevance of this space and context for the purposes for which we live.

Thus we have to treat "worldly life" as a moral and spiritual challenge without rejecting the material existence of the world. One is expected to give this world its due in a proper and joyful way but always remember what Prophet Muhammad said: be a stranger (gharib) in this world and never attach yourself to it. Walk upon this path and enjoy its beauty but know that the ultimate end is not here.

This dual attitude of non-attachment and giving the world its due is an extension of Islam's insistence on following the middle path in all things and avoiding all extremisms. It was against this background that Islam built one of the most enduring civilizations in human history. Muslims scientists, scholars, artists, rulers, peasants and others sought to cultivate the world in harmony with the order and beauty of the universe. Their great material and scientific achievements never led them to materialism and a worshipping of the world. But they never rejected its reality in a monastic manner either. They treated the world as transient and relative but also sought to make it more beautiful and just. According to the Quran, the entire universe has been given to us as a "trust" (amanah) and the one who has been entrusted with it ought to be trustworthy (amin). This is the only way that the world will become a safe and secure place for all human beings.

The intellectual and moral challenge before us is to be in the world but not of the world. It is to live in the world in a way that gives its due without either denying its existence or surrendering ourselves to it. It is to fully enjoy life while never losing sight of our ultimate goal in the world.

So the charge that Islam is a worldly religion is utterly false. Islam gives the world its due within the larger context of things without forgetting the ultimate goal of our earthly existence. Islam is not a world-denying religion. The trick is to realize the full meaning of justice, which is to "put everything in its proper place." When we are fair to the world and to ourselves, everything receives its proper due.

We thus ought to live in the world to overcome its lower qualities and attain a state of moral and spiritual perfection that serves as the purpose for which the world has been created and entrusted to us in the first place. Attaining truth, virtue, love and happiness in a genuine and enduring way is possible only when we develop an attitude of non-attachment to the world and knowing fully why we are here.