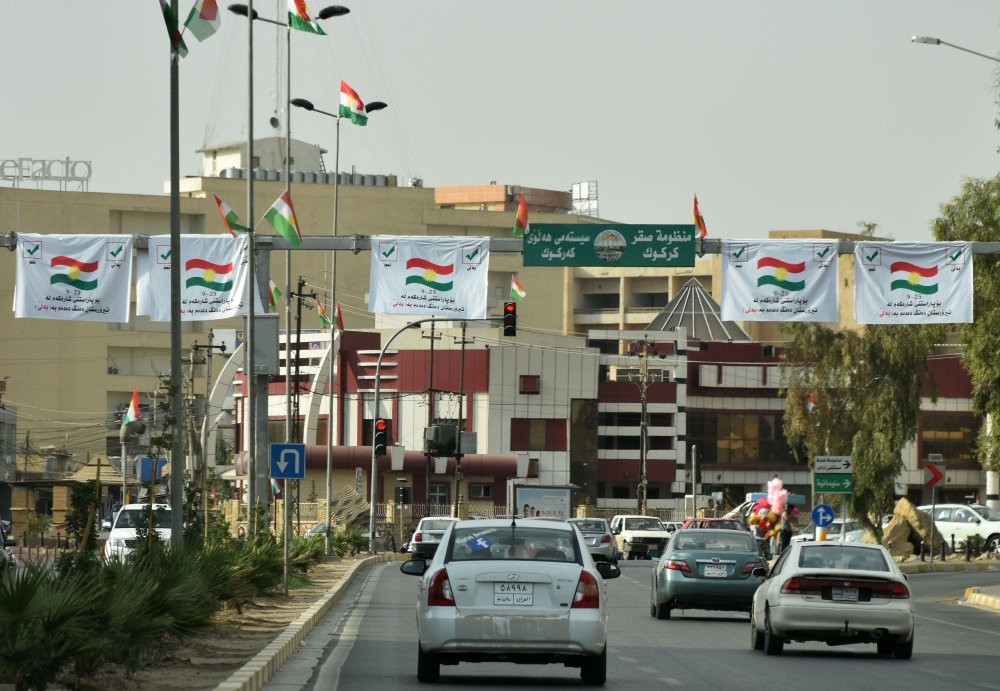 Posters encouraging people to vote in the KRG independence referendum are seen in central Kirkuk on Sept. 21.
by İbrahim Kalın Sep 26, 2017 12:00 am

The decision by the Iraqi Kurdistan Regional Government (KRG) to hold an independence referendum on Sept. 25 has already triggered a major crisis across the region and the globe. More tremors are expected in the coming days. The Kurds of Iraq run the risk of isolating themselves and losing the gains they have made over the years. Whether Irbil decided to go for the referendum for the sake of independence or to strengthen its hands against Baghdad is almost beside the point at this stage. There will be serious consequences and they will be felt at various levels.

No country supports the breaking up of Iraq. The only exception is Israel whose Prime Minister Netanyahu openly supported the creation of an independent Kurdistan – highly suspicious support which, given the realities in the region, should worry rather than gratify the Kurds.

Baghdad already took a number of steps in response to the independence vote. Iran closed its airspace to Sulaymaniye and Irbil. Turkey is working on several measures. Other countries are likely to follow suit.

There is no doubt that the Kurds of Iraq are entitled to peace, security and prosperity as much as Arabs, Turkmens and other groups that make up the Iraqi society. They have suffered at the hands of oppressive rulers as much as Sunni and Shia communities. They have contributed to Iraqi society in numerous ways.

Their main disagreements with Baghdad are based on legitimate concerns. As a matter of fact, Baghdad has failed to deliver on key security and political issues not only in regards to the KRG but also the Sunni Arabs and the Turkmen. The sectarian approach that the two Maliki governments took undermined much of the hope and trust essential to keep Iraqi society together. The Kurds have suffered from this irresponsible and costly politics but so have Sunni Arabs and Turkmen.

In the final analysis, the Kurds of Iraq do not have a special status in the face of the trials and challenges of the post-invasion Iraq since 2003. But the KRG has made many gains in spite of the chaos in which Iraq has found itself for more than a decade. The KRG is already a federal unit with its own parliament, flag, security force, i.e., the peshmarga, border and customs controls and even money. No other group in Iraq has any of these privileges. The referendum now runs the risk of jeopardizing these gains.

The claim that every ethnic group should have its own nation-state is highly questionable and dangerous. There is no end to where this may stop. With this logic, you may have dozens of new states in Europe, the United States, Africa and Asia. It does not make sense to break up countries at a time when deeper social, political and economic integration and regional alliances serve the interests of nations better.

The legitimate concerns of Iraqi Kurds should be addressed within the territorial integrity and political sovereignty of Iraq. The partition of Iraq would set a dangerous precedent in a region already faced with numerous security challenges. The referendum, which is illegal under the Iraqi constitution, will not be recognized by any country or international body.

It should be made clear that the opposition to independence is not directed at the Kurds of Iraq. Turkey has stood by Iraqi Kurds politically and economically even in the most adverse circumstances. Kurdish leadership in Irbil, however, is endangering the political and economic interests of their own people by going for the breaking of Iraq and alienating themselves from their closest ally Turkey.

While the referendum itself is illegal and problematic, the inclusion of Kirkuk, which is a disputed area and not under the KRG, in the voting areas makes it even worse for Turkmen and Arabs living in Kirkuk. Turkey is rightly more concerned about Kirkuk as it has a special relationship with the Turkmen of Iraq. Attempt to change Kirkuk's demography was already a dangerous policy. With the referendum in Kirkuk, it is certain to stoke ethnic tensions and trigger clashes in this historic city – a policy that would be only to the detriment of the KRG and its legitimacy.

Despite numerous warnings, the KRG leadership went ahead with the referendum. Its negative consequences are already out there. The only way forward now is to consider it as null and void and go back to the negotiating table with Baghdad within the territorial integrity and political sovereignty of Iraq. This may be a difficult choice for Irbil but it is still better than on insisting on a policy that will only make it more isolated, weaker and vulnerable.