The Syria summit in Ankara 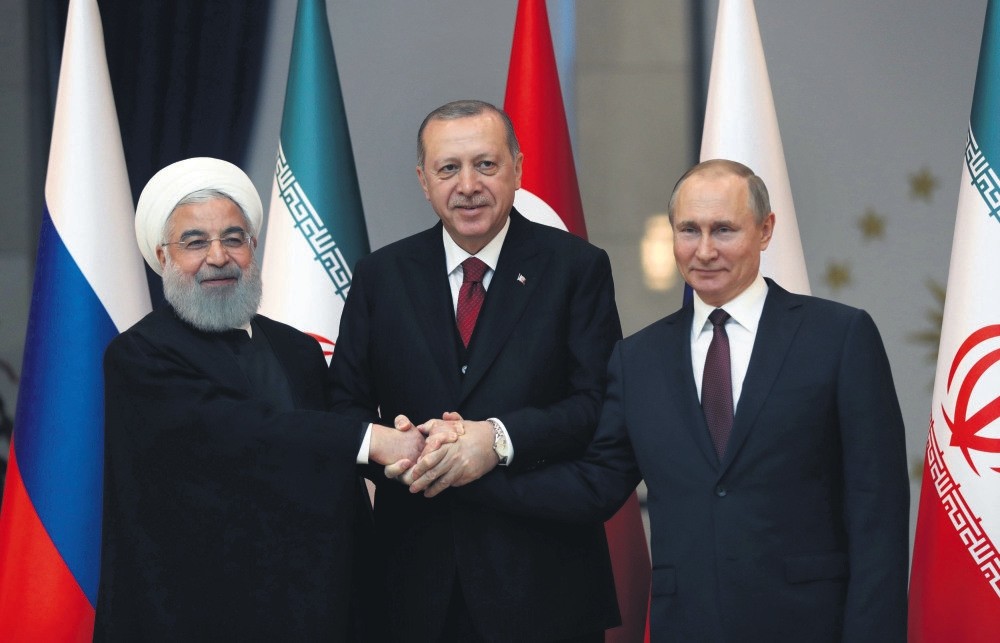 Without denying the complexities of the Syrian war in its current state, the Ankara summit was an important step to clear Syria from all terrorist elements and facilitate the political process that will give the Syrian people their freedom, peace, stability and dignity

President Recep Tayyip Erdoğan hosted the trilateral leaders' summit in Ankara on April 4 to find a lasting solution to the seven-year Syrian war. Attended by Iranian President Hassan Rouhani and Russian President Vladimir Putin, the summit held promise but also put forth the challenges to end the Syrian war.It is no secret that the Syrian war has become a stage for global power games in the Middle East. With United States, France, Saudi Arabia, Iran and Russia, the main stakeholders have different views and priorities on how to end the war. There are two eventual goals shared by all – eliminating Daesh and maintaining Syria's territorial integrity. But these two goals also lend themselves to different interpretations and, at times, serve different purposes.

The U.S. administration says destroying Daesh is the main goal of its mission in Syria, but it has taken on different meanings over time. The evolution is from fighting Daesh to countering Iran and Russia in Syria, which requires different explanations. That is why U.S. officials make conflicting statements about the current state of the fight against Daesh. Some say the fight is over and Daesh is eliminated while others say the threat is still there and the U.S. military presence is needed for the long term. This is also the justification for the U.S. to work with the PKK's Syrian affiliate Democratic Union Party (PYD) and its People's Protection Units (YPG) forces, which Ankara considers to be terrorist organizations.

It is becoming increasingly clear in recent months that the U.S. wants to stay in eastern Syria as a counter force to Iran – a policy supported by Saudi Arabia and the United Arab Emirates (UAE). U.S. President Donald Trump said it when he mentioned that if the Gulf countries want the U.S. to stay in Syria, they must pay for it. Clearly, the issue is not about Daesh anymore, but about creating a new power balance in Syria and beyond. The fight against Daesh is a secondary goal now, and the U.S. military has a problem finding justification to stay in Syria within U.S. law, which allows the military to operate in foreign lands only to fight against terrorism.The joint statement by the leaders of Turkey, Iran and Russia on April 4 mentioned the need to end the fight in Syria and referred to the Astana talks "as the only effective international initiative that had helped reduce violence across Syria." It stressed the importance of working under U.N. Security Council Resolution 2254 and the peace talks in Geneva. It emphasized the three countries' commitment to the "sovereignty, independence, unity, territorial integrity and non-sectarian character of Syria." This is a reference to the structure of a future Syrian government as non-sectarian, non-fractional, inclusive, democratic and pluralistic.

The statement also has a reference to the PYD and YPG without mentioning their names. The countries "rejected all attempts to create new realities on the ground on the pretext of combating terrorism and expressed their determination to stand against separatist agendas." This is an important outcome and confirms that Tehran and Moscow share Ankara's concerns over the PYD and YPG in Syria. As a result of Turkey's firm stance, this terrorist group has not been invited to either the Astana or Geneva talks.

Ankara's firm position is right because it separates a terrorist network that seeks to create de facto conditions on the ground to carve out a separatist statelate in Syria from Kurds and other members of Syrian society. It is also clear that Turkey's fight against the YPG in Syria is not a distraction from the fight against Daesh. To the contrary, it complements the fight against terrorism in all its forms. Eliminating all terrorist threats from all of Syria must be the goal of all stakeholders.

Much work remains to be done on the ground. Russia and Iran have to use their leverage over the Syrian regime to respect the cease-fire and allow humanitarian aid to be delivered across the country. They also have to pressure the regime to follow through with the political process, which includes the writing of a new constitution and holding free and fair elections.

Without denying the complexities and challenges of the Syrian war in its current state, the Ankara summit was an important step to clear Syria from all terrorist elements, including Daesh, al-Qaida, al-Nusra, the PKK, PYD and YPG and facilitate the political process that will give the Syrian people their freedom, peace, stability and dignity – the fundamental rights that they have been denied for too long already.