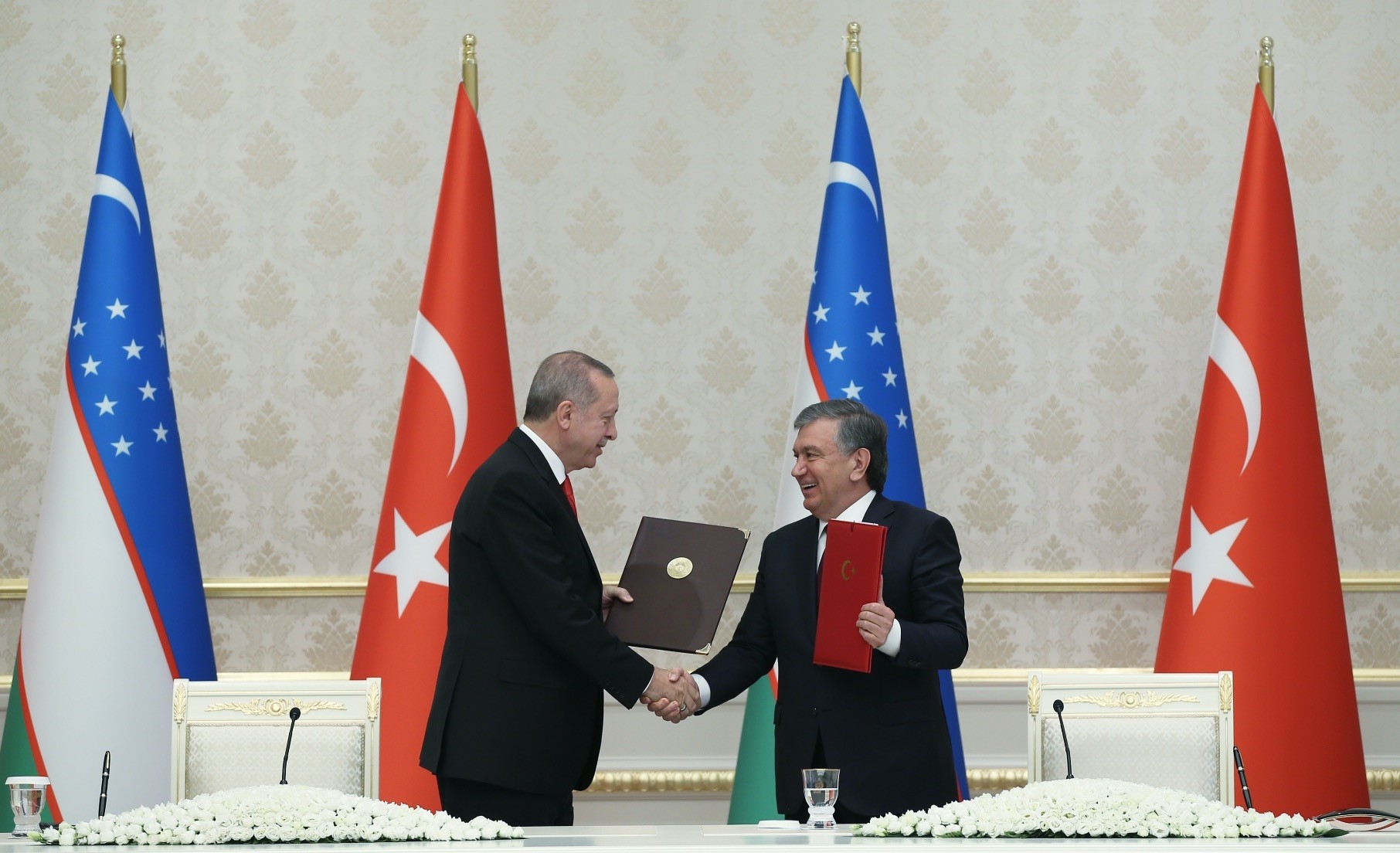 President Erdogan (L) and Uzbekistan's President Mirziyoyev shake hands during a signing ceremony of agreements between the two countries following their meeting in Tashkent, Uzbekistan, April 30.
by İbrahim Kalın May 05, 2018 12:00 am

Turkey's position in the Western alliance as a NATO member does not prevent it from opening up to other strategic regions in the world. This explains why it has increased its foreign policy activity in Africa, the Middle East, Central Asia, Southeast Asia and Latin America

While Turkish domestic politics is focused on the upcoming elections on June 24 and world politics is busy with the unexpected rapprochement in the Korean Peninsula, President Recep Tayyip Erdoğan paid a historic visit to Uzbekistan, one of the key countries in central Asia and located on historical Turkish lands, and South Korea. Besides boding well for bilateral relations, this trip underlies Turkey's 360-degree foreign policy outlook and the growing importance it attaches to Asia.Turkey has historical and cultural ties with the Turkic republics of Central Asia. It has developed excellent political and economic relations with Azerbaijan, Kazakhstan, Turkmenistan and Kyrgyzstan since their independence in the early 1990s. The missing link was Uzbekistan for various reasons. But that is changing now, and Uzbekistan is taking the place on the world map it deserves.

Under the leadership of President Shavkat Mirziyoyev, Uzbekistan is opening up to ensure its economic development and political stability. During Erdoğan's visit, 25 agreements were signed in the fields of economy, trade, energy, education, infrastructure and other fields. Turkey and Uzbekistan formally established the High Level Strategic Council mechanism, which Turkey has already established with Russia, Iran, Iraq, Pakistan, Greece, Algeria, Tunisia, Serbia and others around the world. This mechanism will provide further impetus to improving relations between the two countries in all areas of cooperation.

Turkish citizens are now able to visit Uzbekistan without a visa for up to 30 days. Turkish businessmen are looking for investment opportunities. The current trade volume of $1.5 billion will be increased to $5 billion in a short period of time. Furthermore, Uzbekistan will join the Cooperation Council of Turkic Speaking States thus aiming to strengthening its relations with other countries in the larger Turkic world.

These steps bode well for Uzbekistan as it has vast potential for economic development. With its young and dynamic population of over 30 million people, Uzbekistan is the center of classical Islamic and Turkic culture and civilization. Over the centuries, the cities of Semerkand, Bukhara, Khiwa and Kharezm have produced countless scholars, philosophers, artists and statesmen who have shaped traditional Islamic civilization with an outreach from Central Asia to the Middle East and the Balkans. Such Muslim luminaries as Imam Muhammad al-Bukhari, Imam Maturidi, Biruni and Bahauddin Naqshiband have all hailed from Uzbek lands and laid the foundations of Islamic civilization. Their enduring legacies continue to inspire the intellectual, religious and spiritual lives of hundreds of millions of Muslims across the world today.

After Tashkent and Bukhara, Erdoğan visited South Korea at a time of historic proportions. The world's attention is on the rapprochement between South and North Korea and the denuclearization of the Peninsula. Erdoğan paid the first official visit to South Korea just days after the two Korean leaders shook hands to end years of conflict between the two countries. This is a very meaningful coincidence given Turkey's historic ties with the people of Korea during the Korean War in the 1950s. As a matter of fact, Turks and Koreans consider each other as "blood brothers" and strategic partners.

The two countries have excellent political and economic relations. The current trade volume is over $7 billion and keeps increasing every year. Korean companies have invested in such fields as communications, information technology, house appliances and major infrastructure projects. The two countries have a huge potential for partnership in advanced technology. Erdoğan's visit gave more substance to this relationship.Uzbekistan and South Korea are two very different countries, but both extended very warm and friendly welcomes to Erdoğan and his delegation.

Both countries produced substantial agendas for the visits. All this shows the importance of Turkey's global perspective in foreign policy. As it has been the case over the last 16 years, Turkey sees foreign policy from a 360-degree point of view. It does not consider it as a zero-sum game. Turkey's position in the Western alliance as a NATO member does not prevent it from opening up to other strategic regions in the world. This explains why Turkey has increased its foreign policy activity in Africa, the Middle East, Central Asia, Southeast Asia and Latin America.

Those who see foreign policy as a reductionist enterprise may not understand Turkey's global outlook. They may see world politics within the narrow confines of blocs and boxes. But Turkey moves on with its globalist and positive agenda in foreign policy.

Presidential spokesperson for the Republic of Turkey
Last Update: May 05, 2018 12:19 pm
RELATED TOPICS