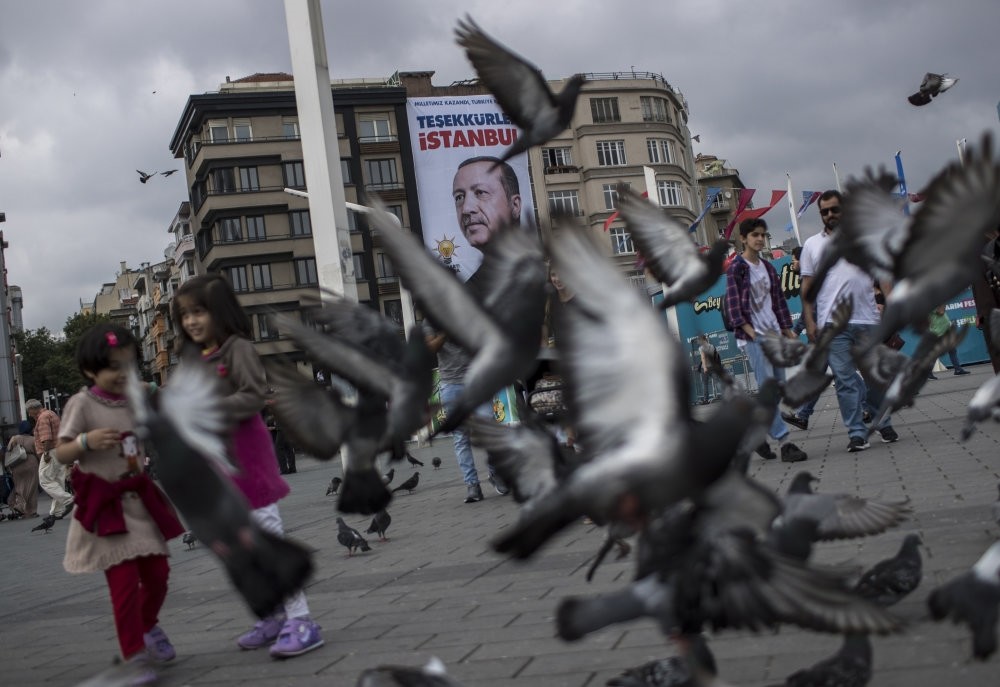 Pedestrians walk in front of a poster of President Recep Tayyip Erdou011fan, which reads ,Thank You, Istanbul,, two days after the June 24 presidential vote in 2018, in Taksim Square, Istanbul.
by Ihsan Aktaş Jan 05, 2019 12:00 am

In the early 2000s, futurist writers claimed that global cities, rather than states, would govern the world in the 21st century. Although it is not a frequently used concept in the field of urbanism, the concept of a global city has come to the forefront of international debates concerning urban space in the last decades when globalization has gained significant ground.

In one of our interviews, Turgut Cansever, a philosopher of urbanism, made the following remarks on the rise of the concept of the global city: "The Chinese government has already made comprehensive research on five major cities in China to determine whether they have reached global city status. As a result of invaluable research by the United Nations, apart from London, Paris, New York and Tokyo, only Shanghai and Istanbul were found conform to global city standards."

Emphasizing the cosmopolitan structure of global cities, Cansever claimed that no one feels excluded in a global city because they can easily develop a vital sense of belonging. As an example, Cansever remarked that anyone coming from one corner of the world, who might feel alienated in a European city, develops a sense of belonging in New York and Istanbul.

During celebrations for World Habitat Day organized by the U.N. 10 years ago, I participated in a conference in New York as a keynote speaker. As I was going to speak on cosmopolitan cities, I titled my presentation "The city of no one." Referring to the exceptional qualities of the cosmopolitan cities of New York and Istanbul, I claimed that Istanbul does not belong to Turks or Arabs, Westerners or Easterners, Balkans or Caucasians, Africans or Latins, Muslims or Christians. As Istanbul, by its very cosmopolitan spirit, excludes no one, I concluded that Istanbul belongs to no one and everyone.

Istanbul is a sui generis city whose historical structure is constituted by cultural layers. From the Romans and Byzantines to the Ottomans and the republic, these cultural layers continue to coexist in the cosmopolitan spirit of the city. In addition to its historical and cultural heritage, Istanbul's cultural prosperity derives from the Istanbulite identity.

The former president of the Scientific and Technological Research Council of Turkey (TÜBİTAK), Ahmet Yüksel Özemre, once remarked on his astonishment regarding the inclusive cosmopolitan structure of Istanbul where Muslim, Christian and Jewish communities coexist peacefully. Such a wealthy culture of coexistence that has been experienced in the neighborhoods of Bağlarbaşı, Balat, Kurtuluş and Beyoğlu serves, Özemre claimed, as a natural model for the world. Indeed, in one of our documentary studies on Istanbul's cultural interactions with the cities and countries of the world throughout history, we have concluded that it is impossible to imagine half of the world without taking Istanbul into consideration. Being the capital of one-third of the world, Istanbul had always been, in the Middle Ages, one of the primary subjects of European capitals.

During a meeting with the New York Chamber of Architects, the president of the chamber emphasized the significance of Istanbul for the most famous intellectuals and artists coming from all corners of the world. Regretting the loss of the historical peninsula, the president as a true Istanbulite urged us to protect the neighborhood of Eyüp.

As a cultural capital of all the nations in the region, Istanbul is invaluable for the whole world. It has been the most ambitious cosmopolitan and global city in the last quarter century. Aware of Istanbul's global significance, all political parties are preparing themselves for the local elections in Istanbul with subtle strategies. The ruling Justice and Development Party (AK Party) nominated former Prime Minister Binali Yıldırım as its candidate, while the opposition Republican People's Party (CHP) nominated Ekrem İmamoğlu, the mayor of a district in Istanbul. In the next column, we will discuss the prospective results of such a crucial election for the governance of Istanbul, a city with such global significance.

İhsan Aktaş is Chairman of the Board of GENAR Research Company. He is an academic at the Department of Communication at Istanbul Medipol University.
Last Update: Jan 05, 2019 8:00 am
RELATED TOPICS