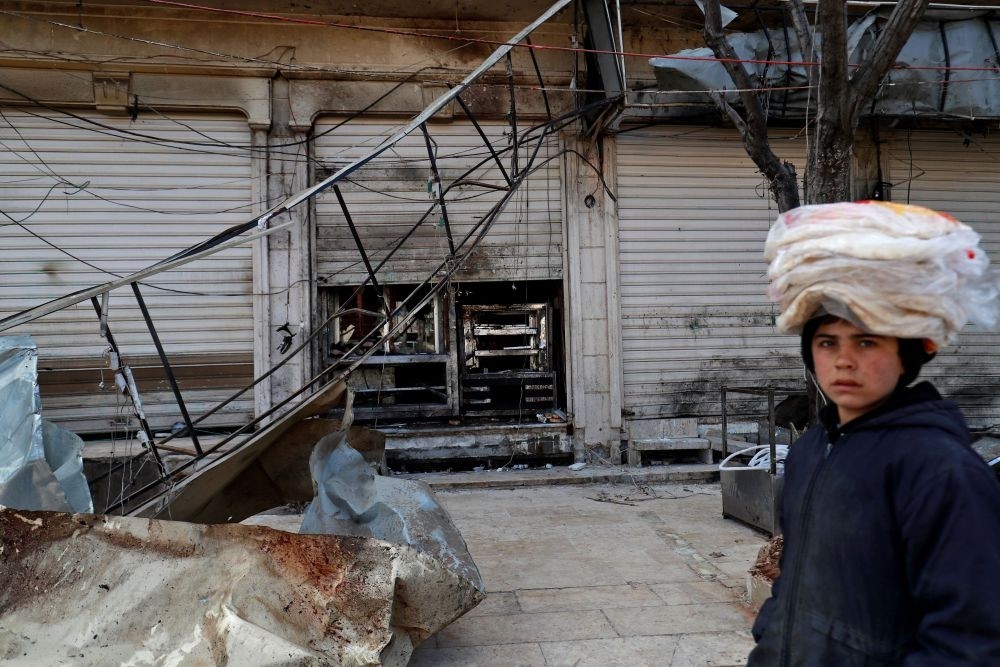 A Syrian boy walks past the site of a suicide attack in the flashpoint northern Syrian city of Manbij, which killed four U.S. serviceman, Jan.17.
by Ihsan Aktaş Jan 19, 2019 12:00 am

There are many stakeholders in Syria, but there is neither a tangible solution nor comprehensive road map for the future of the country

A one-sentence summary of the Arab Spring was as follows: "They wanted a better life and to live freely in democratic countries." They lived in security for hundreds of years in empires. Western people of the postcolonial era have lived a life of freedom and prosperity for almost 80 years. Muslim countries, on the other hand, struggled with invasions in the 19th century and colonization and dictatorships in the subsequent century.

People living in Egypt, Tunisia, Libya, Syria or other Arab countries wanted a life like those in European countries and Turkey. Turkey's last decade was particularly attractive and tempting for the Arab street, thanks to the conservative party in power in Ankara operating democratically. It is furthering the European Union processes. There is full freedom of thought and faith; this democratic country also promises enrichment. In my opinion, a democracy or an improvement in freedom of thought and faith, which does not promise wealth, would not be much of an attractive choice.

Before analyzing the turmoil in Syria, as all states in the world have taken positions there, let's take a look at current institutions in the world and imbalanced international politics.

Let's start with the United Nations. After the end of the Cold War, the U.S. proclaimed the new world order and said, "I'm the only gendarme in the world." It never considered the U.N. in relation to its unjustified invasions and actions in the world, mainly Iraq, and this organization has become a nongovernmental organization (NGO) that only works for the U.S. Today, the United Nations lacks the strength to solve even the slightest conflict, let alone a full-scale war between nations.

The European Union, which emerged as a third power, a balance between the U.S. and Russia, was expected to be a problem-solving due to its belief in democracy, although the inclusive principles of the EU are limited to EU territory.

The EU has been an ineffective promoter of balance that is incapable of bringing forward the thesis "let Syrian migrants live in Syria," although the refugee problem caused by the Syrian civil war has reached the point of shattering the European Union. The U.S. likely thinks less of the European Union as a respectable ally. Its impact on world politics is almost zero.

What about the Organization of Islamic Cooperation (OIC)? It has failed to make its presence felt since its foundation. After condemning the U.S. to solitude in the U.N. with regard to the Palestine question following Turkey's shift to the presidency of the organization, its second important development is emphasizing countries with deep-rooted traditions such as Iran, Turkey, Pakistan, Malaysia and Indonesia rather than the Gulf countries, enabling the OIC to have a vision in the long run. Nevertheless, the OIC is still far from a nonaggressive pact that would imply an eastern Westphalia among Muslims.

After the end of the Cold War, Russia returned to the global stage with the Syrian civil war due to U.S. President Barack Obama's incorrect policies and has no intention of returning to the bottle like Aladdin's genie. The Russian Federation fights U.S. economic threats with weapons and missiles. By encircling the Syrian area, Russia has caused the U.S. to fail in Syria and become the most effective state in the process.

Only when Arab countries gain their independence will it become possible to say a word on this league. Currently, they are drifting without a route on the ocean.

Turkey is a country whose star has been in the ascendancy for the last decade, and its geopolitical position has been growing stronger with each passing day. That our great ally, the U.S., dragged Turkey, the shining star of the world, into the Syrian issue in the year 2011 might be a step taken to slow down Turkey that has been growing stronger in the world. Surviving all antidemocratic hardships instigated against it, Turkey is taking firm steps toward becoming a fair regional power.

Incompatible with the global system since the beginning, the outcome of Iran's struggle with the U.S. will determine its future. Iran holds its ground in all strategic areas and dominates its neighbors – Yemen, Syria and Lebanon – thanks to its militia-based policy.

We started by asking if it is possible to reach the end in Syria, and we could only define the positions of organizations or NGOs such as the U.N., the EU, the OIC and the Arab League, and countries, such as Russia, Iran, Turkey, etc. In our next article, we will discuss how an order, that is nonexistent in the world, can be established in Syria.