Davutoğlu starts his rounds for a coalition 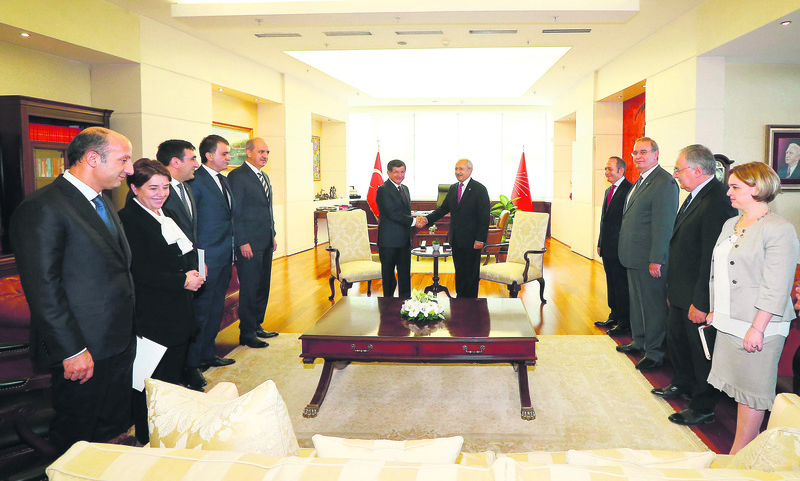 The CHP wants a strength-based government that will undertake reforms in all areas from the justice system to the economy. CHP leader Kılıçdaroğlu says this should be a ‘reformation government' in all senses

Now the scene is set for the democratic process to function as Prime Minister Ahmet Davutoğlu starts his talks with political leaders to seek ways to form a coalition. With the parliamentarians having been sworn in, with the speaker of Parliament having been elected, with the speakership council having been formed the formalities are over and President Recep Tayyip Erdoğan thus asked the leader of the party with the most seats in Parliament, Justice and Development Party (AK Party) Chairman Davutoğlu to form the news government.

Had the AK Party won a majority of the seats in Parliament (at least 276 seats) the formation of the government would have been a mere formality as Davutoğlu would name his own cabinet list and once this was approved by the president of the government could then sit down to business. But in this case the AK Party fell short of a majority by winning 258 seats and thus needs a coalition partner to run the country.

As the opposition has no hope of ganging up to face the AK Party the only hope now is for the AK Party to be able to forge a coalition with either the left-wing Republican People's Party (CHP) of Kemal Kılıçdaroğlu or the ultraconservative Nationalist Movement Party (MHP). From the day he was asked by the president to form the government Davutoğlu has 45 days to form his government. If he can't and the other leaders also fail to forge a cabinet then, according to the Constitution, new elections become compulsory.

Davutoğlu's first stop on his tour on Monday was CHP leader Kılıçdaroğlu. The CHP wants a strength-based government that will undertake reforms in all areas from the justice system to the economy. CHP leader Kılıçdaroğlu says this should be a "reformation government" in all senses. In his previous statements, Kılıçdaroğlu and the CHP spokesmen have said the AK Party has ruined the country in the past 12 years and the new government has a lot of healing, repairing and maintenance to do. The AK Party, on the other hand, says it ruled the country perfectly in the past 12 years and objects to the need for a reformation government. It says the deep-rooted reform movement it started should go on under the new government. The sides can agree to disagree on the past performance of the AK Party governments and forge an understanding that "new" reforms are needed and that this government can undertake them.

The sides can also agree on the continuation of the peace and reconciliation process with the militant Kurds of Turkey and thus ease the worries of the Kurds that the process will not be terminated.

There are claims that the CHP wants the post of Foreign Minister in the new coalition cabinet but that seems to be a sticky area as the sides do not see eye to eye on all the foreign policy issues led by Syria and even by Egypt.

Above all there is also talk that the CHP wants a rotating prime ministry system where the CHP and AK Party leaders take turns at becoming prime minister. That is something that the AK Party will be hard pressed to agree to.

Above all, the main problem remains: the CHP's open enmity to President Recep Tayyip Erdoğan and his establishment. While the sides can forge some kind of understanding on all issues, it is extremely hard to get many of the CHP members to agree to the dominance of the president, let alone respect him. Erdoğan as a president elected by the people feels he has the right to act with more authority while the CHP detests this and challenges it. As Erdoğan will not take a step back and agree to sit in his corner, it is extremely hard for the CHP to form a coalition under the shadow of the president.
Last Update: Jul 14, 2015 1:31 am
RELATED TOPICS