Is the PKK sincere in its fight against ISIS? 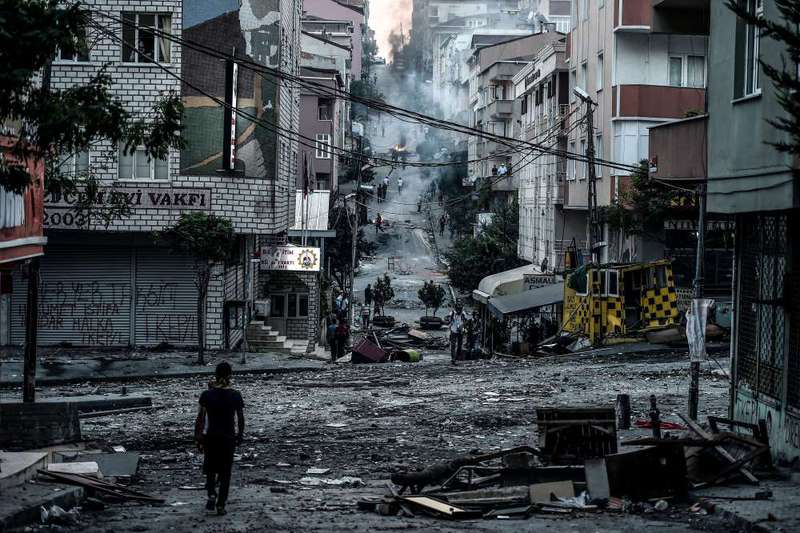 The scene after the clashes between Turkish police forces and PKK-affiliated groups in Istanbul's Gazi district.
by İlnur Çevik Jul 28, 2015 12:00 am

Turkey's militant Kurds under the PKK banner unleashed a wave of terrorist activities in the 1990s and 2000s that left at least 40,000 people dead in this country. Then came the lull as the government of Turkey, first led by Recep Tayyip Erdoğan and then by Ahmet Davutoğlu, conducted a campaign to end the terrorist conflict. Today the PKK seems to have ended this period of peace and calm by killing Turkish soldiers and policemen once again. Of course the "peace and calm" mentioned above was only relative because even in the period of relative calm, the PKK remained active, being involved in 1,083 incidents, some including very serious bombings and armed attacks - although no fatalities were caused, thus the authorities pretended to look the other way for the sake of the positive environment that was established in Turkey. While all this was going on, a new threat entered the Middle Eastern scene in Iraq and Syria as religious fanatics unleased a campaign to carve out chunks of these countries and declare their dominance. Hence the Islamic State of Iraq and al-Sham (ISIS) emerged and took over the Mosul area in Iraq before taking many parts of Syria, especially in the northern regions that border Turkey.

ISIS gained so much ground that in the end they started to threaten Irbil and Kirkuk and it took coalition aerial bombings, led by the Americans, to halt the ISIS hordes and help the peshmerga forces of Masoud Barzani to regain control. At the time ISIS also grabbed the Sinjar province and the peshmerga forces, along with the PKK militants, rushed to the area to halt the ISIS atrocities. While all this was going on, the ISIS forces wreaked havoc in northern Syria, grabbing many areas and the fall of Kobani forced the Syrian Kurds led by the Democratic Union Party (PYD), which is close to the PKK, to seek aid from Barzani to save the city. Turkey allowed peshmerga forces to enter Kobani through its territory and flush out the ISIS forces. Once Kobani was saved, peshmerga forces were withdrawn back to northern Iraq.

Despite all this, the PKK and its supporters in Turkey, especially the Peoples' Democratic Party (HDP), have been accusing the Turkish authorities of cooperating with ISIS. They also claimed a recent ISIS terrorist suicide bombing in Suruç that killed 32 Kurdish youths of Turkey was the work of Turkish authorities who cooperated with ISIS. Of course all that was nonsense but the PKK did not think so and killed two police officers as a reprisal and made this public. Ever since then, half a dozen policemen and soldiers have lost their lives in PKK terrorist attacks. The PKK has said the period of "non-conflict "has ended. The fact that ISIS carried out a terrorist attack on Turkish soil and the PKK declared that it is resuming its terrorist campaign has prompted Turkish authorities to hit back on two fronts. Turkish jets launched at least four aerial operations against PKK targets in the Qandil Mountains and also against ISIS targets in northern Syria.

Turkey has also decided to be more active in the coalition against ISIS and is opening its İncirlik Airbase to U.S. warplanes to be used against ISIS. Turkey has also rounded up PKK and ISIS fighters and has prevented foreign fighters from using Turkey to slip into Syria and join ISIS.

Once again the leadership that runs the PKK seems to be in a confused state of mind. They seemed to care more about fighting ISIS and thus saving the "Kurdish masses" than fighting against Turkey. They seemed to give the impression that they would mobilize their resources to halt ISIS at any cost. Yet, they are once again trying to undermine Turkey, a country that is actually stepping up its fight against ISIS in close cooperation with the Americans. So the PKK leaders should decide whether or not ISIS is the common enemy and also try to understand that, by resuming terrorist actions against Turkey, they are only helping ISIS, not eradicating it.
RELATED TOPICS