Will the new polls change the parliamentary picture? 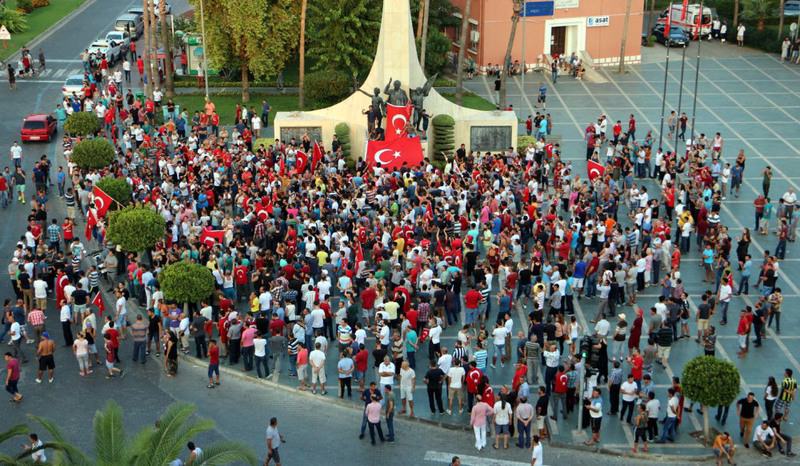 The public's protest to the PKK's increasing terrorist attacks continue in many cities across Turkey.
by İlnur Çevik Aug 25, 2015 12:00 am

It seems as though the two nationalist parties, the MHP and HDP, will be experiencing a loss in their vote rates in the following snap election, because the only thing either of them do is use terrorism as a tool for their political gains

The Parliament has unfortunately disqualified itself in the current political process by failing to produce a coalition government in the past 45 days, required by the Constitution, and has thus passed the ball to President Recep Tayyip Erdoğan, who is by law authorized to dissolve Parliament and decree new elections in early November.

The last minute efforts by the Justice and Development Party (AK Party) and Prime Minister Ahmet Davutoğlu to convince the parties represented in Parliament to take a decision to call early elections failed and thus the scene is now set for the president to lead us to early polls.

Now the real question remains: Will the early elections be a remedy and will they produce a more politically stable picture in Parliament?

The three former opposition parties, the left-wing Republican People's Party (CHP), the ultra-conservative Nationalist Movement Party (MHP) and the pro-Kurdish Peoples' Democratic Party (HDP) have won respectable seats in Parliament and yet their voting percentages are too low so that an increase of even 10 percent would not give them enough seats to come to power on their own.

Compared to these parties, the AK Party has won 41 percent of the votes, which means an increase of a few percentage points in the upcoming elections would give them enough seats to win a majority in Parliament. So the real question is not whether the CHP, MHP or the HDP will be able to come to power on their own but whether the AK Party will be able to get that small push by the voters to win in the polls.

How can this happen?

First of all you have the MHP. The party with its 80 seats has not done anything constructive since the elections to contribute to the democratic process in Turkey. It has rejected each and every option and has not cooperated with its counterparts to find a solution where the outgoing Parliament could produce a coalition government. All it has done is to allow their arch enemies the HDP to enter the cabinet in the elections government, which must infuriate the MHP electorate. The MHP did not want to be a part of anything where the HDP existed and yet they themselves helped the HDP people enter the elections cabinet by refusing to establish a short-term caretaker government with the AK Party and thus prevent HDP members from entering the Cabinet.

Thus some MHP voters may either turn their backs on the MHP or decide to support the AK Party or they may not be too enthusiastic to go to the polls at all.

Then there are the CHP and AK Party votes that went to the HDP by those who wanted the pro-Kurdish party to pass the 10 percent election threshold. However, they have seen the disappointing attitude of the HDP in view of the rising PKK terrorist activities in Turkey and may now have second thoughts.

Last but not least there are the AK Party people who did not vote for the party on June 7 but have since seen the mess created in Turkey due to political instability and thus may want to make amends.

All these could lift the AK Party to power in the elections, provided that the party does not make serious mistakes to antagonize its own voters and corrects some of the mistakes it made in choosing the candidates it did in the June 7 elections.
Last Update: Aug 25, 2015 2:07 am
RELATED TOPICS