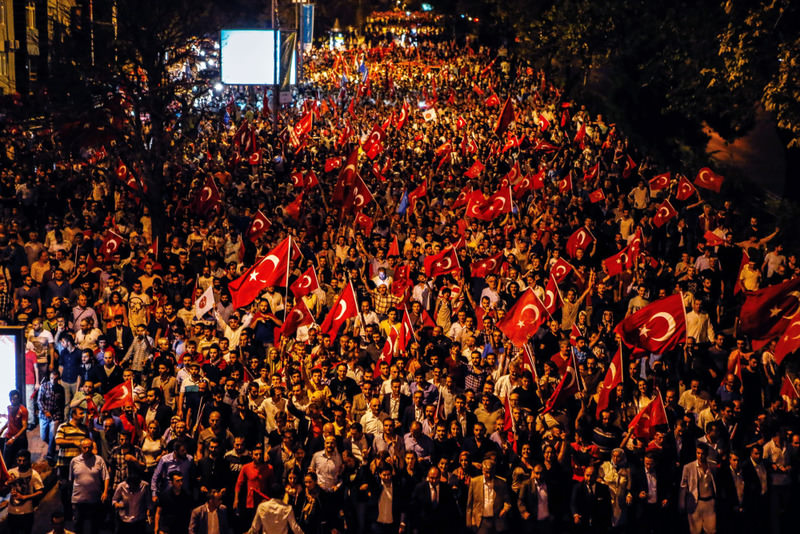 Thousands of people march to protest against the increasing deadly attacks by the PKK on soldiers, police officers and civilians.
by İlnur Çevik Sep 10, 2015 12:00 am

The latest attack on the Turkuvaz Media Group building in an attempt to silence the newspapers from speaking out for a rightful cause, is actually a threat imposed on the freedom of all media groups

Continuously attacking Sabah, Daily Sabah and ATV offices trying to destroy TV stations are only futile gestures by a handful of irresponsible people who think they can bring peace to this country through violence.

Mass circulation daily Hürriyet has been attacked twice in the past few days. Other attackers have tried to enter the Sabah and ATV offices in Istanbul.

You may not like our views or the way we present our views but you cannot silence the press. People will voice what they believe is the truth and we all have to respect it whether or not we like what is written and said.

Yet, we see that the ultra-nationalists have started provocations that may turn into very dangerous developments if the right-wing Nationalist Movement Party (MHP) leader Devlet Bahçeli does not tame his followers.

We see that Bahçeli has encouraged the ultra-nationalists to take to the streets and that is a very serious mistake. Why has Bahçeli done this at such a critical juncture?

The answer lies in the elections scheduled for Nov. 1.

It seems Bahçeli has realized at last that his policies will backfire in the polls and that his MHP will lose votes thus he does not want elections and wants to create an environment of instability where elections will have to be postponed.

The artisans and tradesmen of central Anatolia who switched their votes from the ruling Justice and Development Party (AK Party) and opted for the MHP in the June 7 elections are now angry. They say the party they voted for did not try to come to power as a coalition partner and did everything to sabotage the formation of a government. Thus they feel their votes were wasted and say they will go back to voting for the AK Party.

Even MHP officials say they could not explain to the people why the party vehemently opposed any coalition and supported early elections but then changed their stance and opposed early elections.

The MHP vehemently opposed the presence of the Kurdish nationalist Peoples' Democratic Party (HDP) in Parliament, which received 13 percent of the votes and 80 seats. The MHP people refused to even sit with HDP deputies. Yet today we see that they are in the same boat as the HDP in opposing the Nov. 1 election.

Attacking newspaper offices and harassing journalists will only sharpen the resolve of the media to speak out and fight for a rightful cause. The Sabah group will hardly be deterred by a handful of activists who are trying to silence the group's newspapers and TV stations that are struggling for a rightful cause.

Today is the day when we all have to display utter restraint in view of the massive provocations. We are all deeply hurt and this manifests itself in displays of anger and frustration. But becoming violent, turning your anger into mad actions will not solve anything and will only deepen the crisis. This what the enemies of this country want. We should not dance to their tune.
Last Update: Sep 10, 2015 2:21 am
RELATED TOPICS