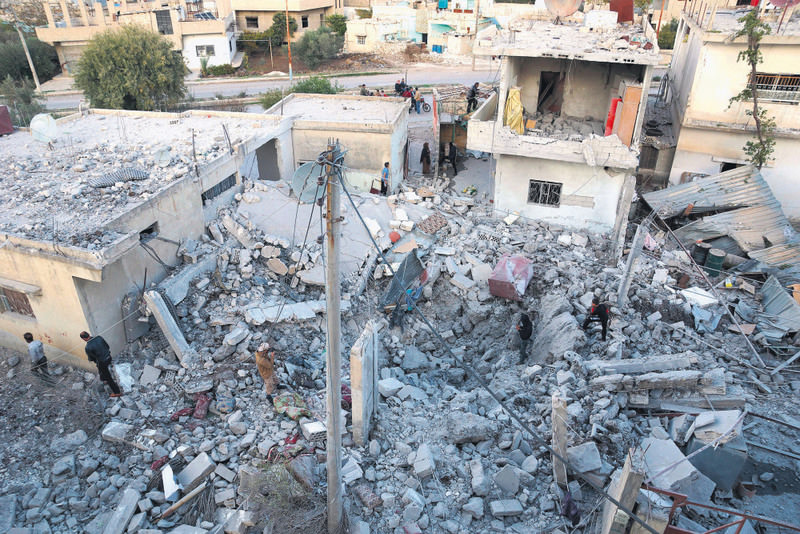 Residents inspect a site claimed to be damaged by the airstrikes of the Russian air force in Nawa city, Deraa, Syria
by İlnur Çevik Nov 24, 2015 12:00 am

The so-called forces of Bashar Assad are gaining ground against the Bayırbucak Turkmens in northwestern Syria with active Iranian and Russian assistance. Assad's "army" is now nonexistent so Iranian mercenaries posing as the land fighting force of the Damascus regime are being deployed against the Turkmens who oppose the regime but have nothing to do with DAESH terrorists. The Russians on the other hand are providing air fighter support as they pound the Turkmens.

This is an intolerable situation for the Turkish people and their government led by Prime Minister Ahmet Davutoğlu.

Firstly the Turkish people are deeply concerned that their Turkmen brothers and sisters are being butchered by Assad and this is being done with Russian and Iranian help only a few kilometers off the Turkish border and there are growing demands by the Turkish public opinion for Turkey to "do something" as the international community led by the United States are just watching the carnage as if they only care for the atrocities of DAESH in Syria and nothing else...

Secondly Turkey is concerned if Assad's mercenaries manage to defeat the Turkmens and the Bayırbucak region falls thanks to Iranian and Russian support, then there will be another massive exodus of Turkmens of Syria to the tune of 40,000. This is an intolerable situation for Turkey which already houses more than 2.2 million Syrians on its land and has already spent about $7.5 billion from Turkish taxpayers' money to sustain them.

The Turkish government has said it will do everything in its capacity to help the Turkmens of Syria and has already started providing relief for 2,000 of them near the border areas. It has housed the Turkmen women and children at a special camp while the men have gone back to Syria to fight the Iranian mercenaries.

President Recep Tayyip Erdoğan as prime minister two years ago saw what was in the horizon and sent trucks loaded with arms and relief supplies to the Turkmens of Bayırbucak. His effort to help the Turkmens was sabotaged by the Gülen Movement who halted the trucks inside Turkey through the state prosecutors they controlled and ruined a covert operation. Erdoğan was accused of sending the trucks to help DAESH which was a load of nonsense. Adversaries of Erdoğan tried to use this as a propaganda ploy against him both at home and at the international level. They seriously harmed the image of Turkey as well as hurting the cause of the Turkmens of Syria.

Turkey now has to show its solidarity with the Turkmens of Syria irrespective of the Iranian and Russian intervention in Syria and the sluggish attitude of the U.S. and its allies to stand by the Turkmens.
Last Update: Nov 24, 2015 11:14 am
RELATED TOPICS