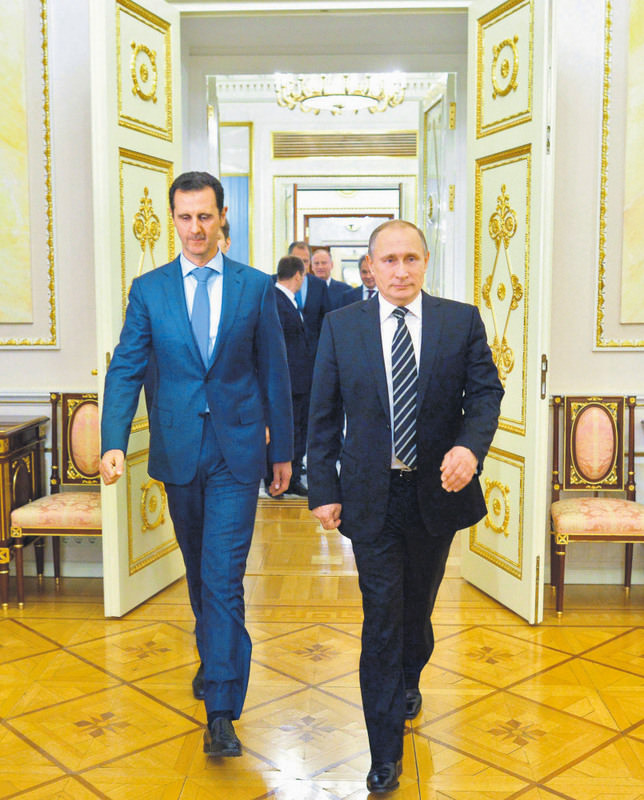 The Russian jet, flying in the region to provide military support for the Assad Regime, was downed by Turkish Air Forces due to its violation of Turkish airspace.
by İlnur Çevik Nov 25, 2015 12:00 am

Ankara also told Moscow that Turkey's rules of engagement were in place and there will be no hesitation to implement them if Russian jets continue to violate Turkish airspace as they have done in the past.

What is interesting is that while Turkish politicians acted with caution and Western powers watched in concern and the Greeks observed the developments with alarm as their own planes frequently violate Turkish airspace in the Aegean and that some Turkish analysts cautioned that Russian President Vladimir Putin would retaliate in some way or another there was a general mood of euphoria among the ordinary Turks who felt "at last the Russians got what they deserved and someone put the brakes on their intransigence..."

The Russians should now ask themselves why the ordinary Turk is so euphoric over this incident. They should realize that while they have these superior interests in Syria that dominate their foreign policy they should also realize that losing Turkey's friendship and alienating the Turkish public is extremely counterproductive, especially in the long run.

Turks will not be blackmailed with the prospects of their natural gas being cut off by Putin. They will not be intimidated with Russia playing a power game in Syria and hurting Turkey's security interests. They should look back on how the Turkish people did not bow to an American's arms embargo in the 1970s when Turkey was not as strong as it is today.

Turks remember well how the Soviet Union collapsed while it was trying to keep up the superpower game and went bankrupt. Yes today you may try to keep Bashar Assad in power by spending millions of dollars on a daily basis to keep up the bombing of Turkmen Syrians and those who oppose the tyrant in Damascus. But sooner or later the realities of the world will catch up with the falling energy prices that have been a massive blow to the Russian economy and Putin too will face dismal failure.

Friends and foes should realize that Turks are extremely unhappy with the way the Turkmen Syrians have been abandoned by the West while they have been subjected to atrocities by the Russians and Iranian mercenaries.

Turks are deeply concerned and angered that the forces of Assad are trying to defeat the Turkmens and grab a chunk of the northwestern Syrian regions in Bayırbucak close to the Turkish border. Ankara should be concerned not only because the Assad hordes will come close to the Turkish border but as Assad did in the past he can vacate the area and eventually hand it to the Syrian militant Kurds close to the PKK as they did in the northwestern parts of Syria in the past.

If Putin wants to fight the militants of the DAESH he is welcome to do so. But he is unleashing his air force against the opposition forces that are fighting against Assad who have nothing to do with DAESH or its crooked ideology. He has to see that those people have no links to DAESH and all they are doing is defending the homes they have lived in for centuries. Those Turkmens did not originate from Russia and have nothing to do with terrorism.

Turks have suffered at the hands of terrorists of all kinds and not only from DAESH. So Putin is the last person to lecture us on who is a terrorist and who is not and who is harboring them.

Putin expected Turkey to contact him and explain what had happened with the Russian plane instead of calling for a NATO meeting. Turkey has cautioned Putin over and over again about the deadly consequences of Russian jets violating its air space. So it was pointless to address him first. Turkey did not rush to NATO to seek support, all it did was inform its allies on what happened as everyone has eyes on the region and have all monitored the incident through their radars, spy satellites and other means. So Putin cannot mislead anyone. If your cause is not right and just you will sooner or later suffer the consequences.
Last Update: Nov 25, 2015 1:34 am
RELATED TOPICS