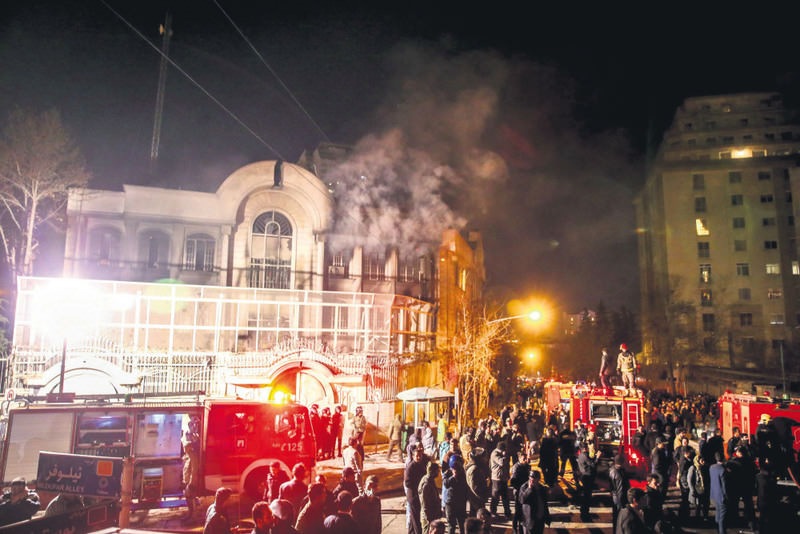 Ankara backs Saudi Arabia to put an end to Tehran's Shiite sectarian policies as seen in Syria, Yemen and Bahrain as well as its destabilizing influence on minority groups in Turkey

Iran is hopping mad because Saudi Arabia has executed a dissident Shiite cleric. Sheikh Nimr al-Nimr was executed along with 46 other Saudi nationals for inciting violence, sedition and insulting the Saudi royal family. What is interesting is that there are Sunni Arabs among those executed, not only Shiites.

The loss of one Muslim life is sacred, but thanks to the sectarian policies of Iran, dozens of Muslims are being butchered throughout the Middle East every minute to serve Iran's cause of expansionism and, unfortunately, human life has become trivial. It is no secret that Iran has been actively involved in destabilizing Saudi Arabia for several years. It wants to exploit the Shiite minority living in western Saudi Arabia and Nimr was a part of this plot. Iran has been doing this throughout the Gulf region in many countries, including Bahrain and Kuwait.

Iran started its campaign to destabilize Saudi Arabia with a series of hajj incidents and later moved on to western Saudi Arabia to sow the seeds of sedition and secession among the Shiites living there.

Iran has been executing Sunni followers for years and no one has raised any questions about this in Sunni countries. Iranian intransigence in the Middle East has become extremely aggressive in recent years with Iran openly intervening in Iraq and Syria, and before that in Lebanon.

Tensions between Iran and Saudi Arabia were on the rise even before the execution of Nimr. The fact that Iran allowed protesters to burn down the Saudi Embassy shows the depth of the enmity Tehran feels.

So it was no surprise that President Recep Tayyip Erdoğan paid a state visit to Saudi Arabia last week and was treated to a very warm welcome. Ankara sees Iran's expansionist moves in the region and is alarmed. Ankara has helped Tehran in the worst of times when the West imposed sanctions because of the Iranian nuclear program. But as soon as Iran signed a nuclear pact with the West, which in fact was initiated by Turkey, Tehran turned its back on Ankara and has thus become increasingly aggressive toward Turkey.

They provide support to PKK terrorists, try to court Alevi groups in Turkey and turn them against the Turkish state to stir up trouble.

They actively oppose Turkey in Syria and Iraq. As such, Ankara is obliged to take counter steps.

It is no coincidence that Turkey is establishing a military base in Qatar that offers strategic dividends to Turkey. Ankara has also moved to mend fences with Israel, the arch enemy of Iran.

It is time the Iranians did some soul searching and started to move to reassess their policies in the Middle East. They have to see that this is an unsustainable situation for them and that they are heading toward catastrophe.
RELATED TOPICS