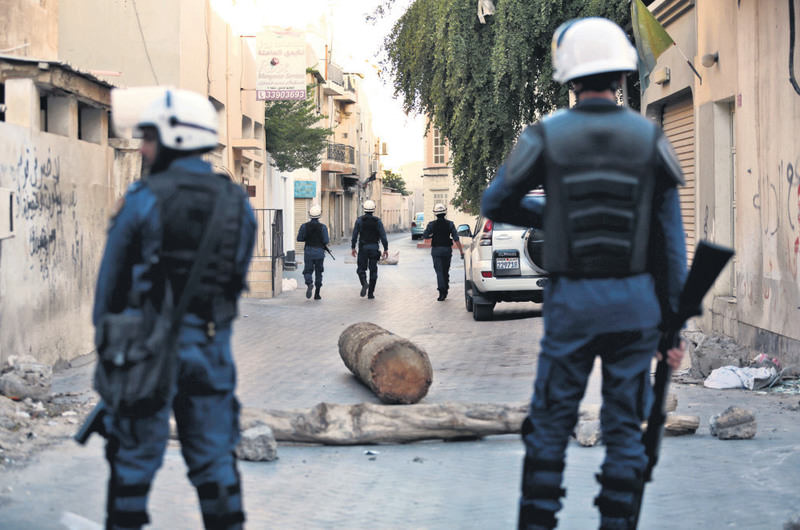 Riot police patrol on the lookout for protesters against Saudi Arabia's execution of Shiite cleric Sheikh Nimr al-Nimr in Daih, Bahrain.
by İlnur Çevik Jan 07, 2016 12:00 am

Aware of the delicate situation faced by King Salman and Iran's efforts for a sectarian war in the Middle East, Turkey calls both sides to common sense

It is a fact that Turkey sees Saudi Arabia as a regional ally and Iran as a regional rival even though it does not declare it openly. Despite this Turkey sees a serious threat in the growing rift between Iran and Saudi Arabia that could lead to more and serious complications and conflicts in the area, which is the last thing we need these days.

Yes it is a fact that Iran is following an expansionist policy that has created deep Sunni resentment, not only among the Gulf Arabs but throughout the Middle East.

It is also a fact that Iran has been progressively working against Turkish interests in a very antagonistic manner recently.

It is no secret that Iran sees Turkey as a regional rival and has been actively working behind the scenes to hurt Turkish interests especially in Iraq and Syria. However, the fact that Iran has been providing weapons support as well as logistics backing for the PKK terrorists and claims that Iran has been encouraging the Kurdish separatists of Turkey to increase their terrorist activities in eastern and southeastern provinces is something very hard for the Turkish public opinion to digest.

Turkey is also unhappy that the Shiites of the Middle East, with strong and active encouragement from Tehran, have been involved in destabilizing several countries in the region led by Bahrain and Yemen and have been working behind the scenes to destabilize western Saudi Arabia where a Shiite minority is involved in clandestine activities.

Iran executed more than 20 Sunni clerics recently and no one has bothered to raise any questions about this. And yet when Saudi Arabia executed four Shiite persons including a leading cleric along with 32 al-Qaida members Iran raised hell and allowed protestors to destroy the Saudi Embassy in Tehran.

Saudi Arabia is going through a volatile phase as King Salman consolidates his rule and is taking extreme care not to spoil the delicate balances in the kingdom. He has to appease the conservative Sunnis as much as the moderates in the kingdom thus when he ordered the execution of al-Qaida members he also allowed the execution of the Shiite dissidents who were encouraging an uprising.

Turkey is aware of the delicate situation that King Salman faces and the balances in Saudi Arabia. It is also aware of the strong Iranian intransigence in the Middle East. Despite this Turkey is not strongly rallying behind Saudi Arabia and opposing Iran but it is keeping on the sidelines trying to promote moderation in Tehran as well as in Riyadh.

This is not a sign of weakness but a delicate act of not pouring fuel over the fire, to create the conditions of putting out the inferno.

Turkey saw the growing problems on the horizon even before the executions in Saudi Arabia and sent its head of the Presidency of Religious Affairs (DİB), Mehmet Görmez, who attended the Muslim unity and solidarity meeting in Tehran, and then met with Iranian supreme leader Ayatollah Khamenei. Thus Turkey is keeping all channels open for the sake of its foreign policy principle of "peace at home, peace in the world."
RELATED TOPICS