Terrorists attack... We shall not be moved! 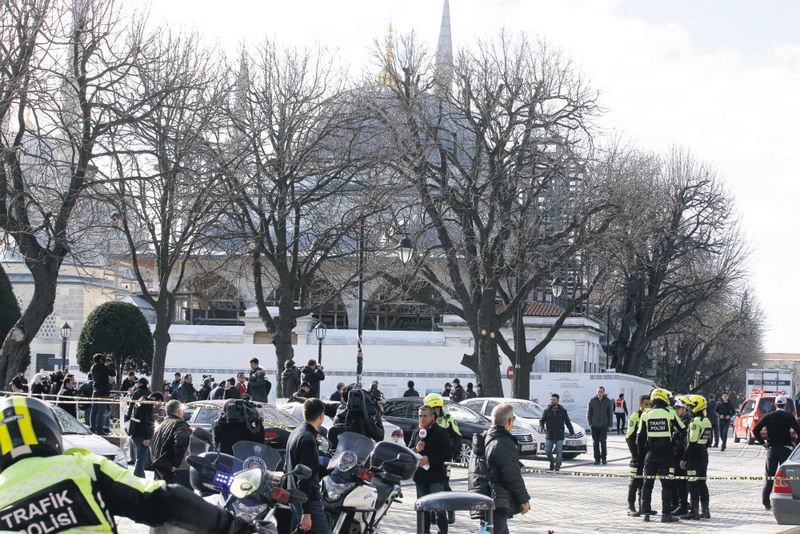 Police and media gather in front of the Blue Mosque at the historic Sultanahmet district in Istanbul after an explosion killed 10 people and wounded 15 others.
by İlnur Çevik Jan 13, 2016 12:00 am

Turkish forces killing some 20 DAESH terrorists trying to attack Bashiqa camp is still fresh in memories, pointing to the terrorist group as the culprit of the latest terrorist attack in Istanbul

It is sad but it is a fact of life that we Turks have to live with the malice of terrorism. It seems this is our fate as we remain an island of stability in the heart of a very volatile region and a location surrounded by wars, discord and infernos.

Turkey has been struggling with its PKK Kurdish separatist terrorists for decades. The PKK has followed a terrorist war, killing soldiers and policemen and at times the local civilian people in eastern and southeastern Turkey to terrorize them so they submit to the wishes of the terrorist organization. At times fringe groups in the PKK have also targeted cities like Istanbul and Ankara but these have been isolated cases. PKK policy has been to not target civilian groups in big cities.

Turkey has also suffered at the hands of the Revolutionary People's Liberation Party-Front (DHKP-C), an ultra-left wing group that has been involved in assassinations and in recent times has been behind attacks on U.S. establishments in Turkey.

Last but not least, the vicious terrorist group called DAESH, which uses religion to commit crimes, has emerged as a threat to Turkey and has launched serious terrorist bomb attacks in some places in southeastern Turkey and recently in Ankara, which left 103 people dead and hundreds injured.

DAESH tried to launch another terrorist attack in Istanbul during New Year's Eve but failed as police netted a group of assassins and live bombs and averted another bloodbath.

The terrorist suicide bomber who killed 10 people and wounded 15 others in the touristic area of Sultanahmet in Istanbul seems to have all the signs of a DAESH attack. DAESH would target tourists while the PKK and DHKP-C would not create such adverse propaganda for themselves in the West by killing tourists.

The attack, which most probably is the work of DAESH, shows the terrorist organization is bent on targeting Turkey in every way possible.

Turkey has dealt heavy blows to DAESH in Iraq near the Bashiqa camp in Mosul where Turkish soldiers killed more than 20 DEASH terrorists who were trying to attack the camp. There were no Turkish casualties. Turkey also launched a massive air and land strike against DAESH recently in northern Syria.

Turkey on the other hand is also bent on destroying DAESH, not only because it is a terrorist organization and a menace to the world but also as it is giving our beloved religion a bad name throughout the world and thus creating Islamophobia and anti-Islamic sentiment.

So in view of all this, do those led by Russia and its leader Vladimir Putin, who have claimed in the past that Turkey cooperates with DAESH, owe Turkey a great apology? Turkey continues to battle all forms of terrorism. Let us hope other countries follow the course.

It is time the Germans, their European friends and the rest of the world started looking into the Syrian picture more carefully and act accordingly. Turkey should not be left alone in the struggle against DAESH.
Last Update: Jan 13, 2016 1:49 am
RELATED TOPICS