Turkey may be forced to bail out the KRG... 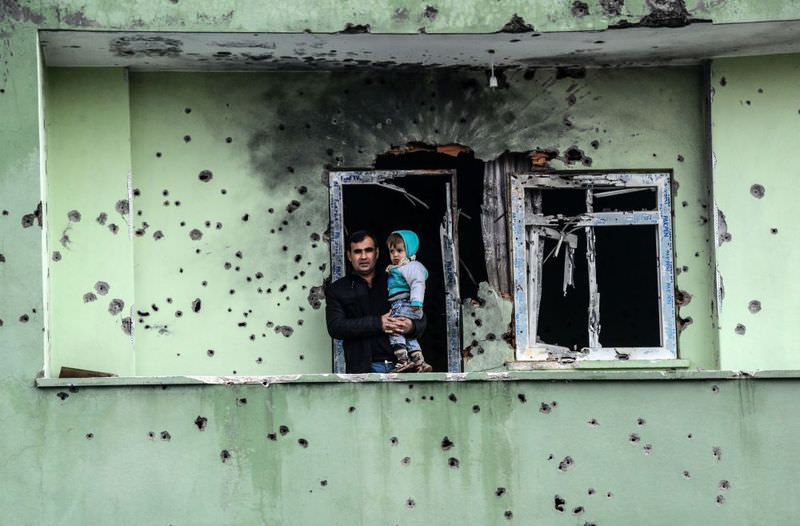 A man holding an infant stands on the balcony of a house damaged after the PKK militants' attacks in the southeastern Turkish town of Silopi.
by İlnur Çevik Jan 26, 2016 12:00 am

Ankara is closely following the effects of the falling oil price on the KRG, for which oil is the only source of income

Once the sun was shining over the Kurdistan Regional Government (KRG) and things were looking up for the Kurds of Iraq. They had established unity and solidarity with Masoud Barzani and Jalal Talabani joining forces and they had found viable oil and natural gas reserves that would end the region's financial dependency on the Baghdad administration.

Things were going so well that young Kurds had started questioning why the region had not declared independence and set a course on its own.

Yet the spring atmosphere of the 2000s was very misleading. The KRG had been established on a weak financial structure that remains a nightmare for its administration even today.

The region, which includes Dohuk, Irbil and Sulaymaniyah provinces and extends into Kirkuk and some parts of Mosul, does not have a sound economy, as it has no industry to provide jobs for the masses. Its agriculture is weak and can only produce a limited amount of food for the 5 million people living in the region. The only means of employment is civil service work, leading to 75 percent of the working population being civil servants. The Iraqi Kurds spend 86 percent of their annual budget on personnel costs and 22 on current account spending, which means a mere 10 percent is left for investments. Repairing the infrastructure eats into this budget.

So keeping civil servants, which includes about 90,000 peshmerga fighters, happy is a priority. But that is easier said than done.

The KRG's only source of income is the share of oil revenues of Iraq that Baghdad is supposed to send to it every month. Baghdad is supposed to send 17 percent of Iraq's oil revenues to the KRG, but there are two snags. One is the fact that Baghdad cuts these funds to around 12 percent or 13 percent, saying the central government is spending money for defense, health and education services for the KRG. The second is that Baghdad does not send these funds on a regular basis and uses it as a weapon to keep the KRG at bay. Fed up with this the KRG has said it wants to sell the oil produced in its region independently and create funds for itself.

It sounds appealing at first glance, but when you look at the details you see there are too many snags. First, the international community led by the U.S. does not allow the KRG to sell its oil on world markets. Second, falling oil prices have made the Kurdish oil as cheap as water, so the KRG cannot rely on these funds even to pay the salaries of its civil servants. And third, oil companies, which spend and are still spending hundreds of millions of dollars to develop KRG oil and natural gas fields, need a return on their investments and are not getting this with the falling oil prices and are threatened with bankruptcy.

So the KRG is faced with the dilemma of struggling to pay salaries and this is creating serious social problems in Iraqi Kurdistan. Peshmerga soldiers are selling the brand new American and German arms given to them on the black market for survival. These arms are falling into the hands of DAESH and PKK terrorists.

In addition to all this, President Barzani's regime is facing serious challenges from the opposition Goran movement and growing dissatisfaction among the Kurds who would normally wholeheartedly support it.

The alarms bells are ringing. Ankara has to watch the developments very carefully and prepare a plan to bail out the KRG when and if necessary. If not, the region may sooner or later fall into chaos and be primed for DAESH occupation.
RELATED TOPICS