Cizre 'wounded persons farce' is a disgrace for HDP 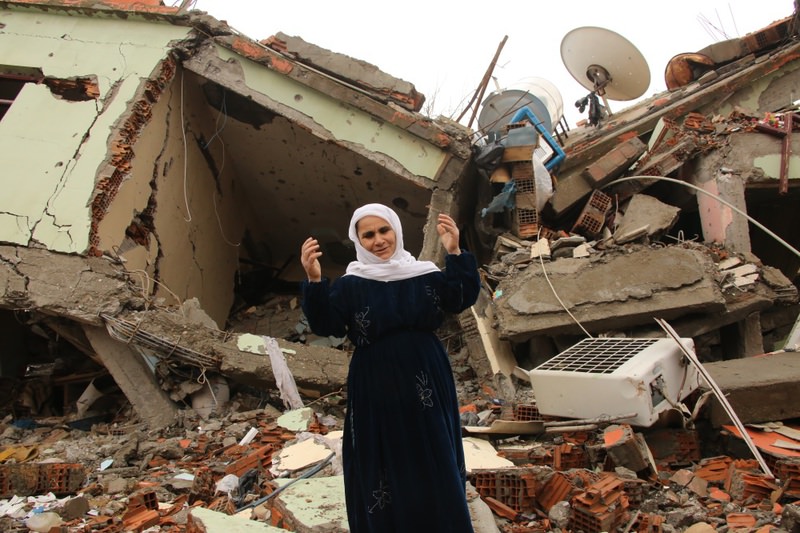 A resident gesturing as she talks standing on the rubbles of a house destroyed by PKK militants in the predominantly-Kurdish town of Silopi, in southeastern Turkey.
by İlnur Çevik Feb 03, 2016 12:00 am

PKK militants, with political support from the HDP to portray to the international community, their homeland Turkey as cruel, are digging ditches to block ambulances sent to the area by Turkish authorities from reaching their destination, where the wounded are allegedly holed up

For days the Kurdish nationalist Peoples' Democratic Party (HDP) has been trying to hijack domestic and international attention by claiming there are about 20 wounded people holed up in a building in the southeastern town of Cizre and that they are being denied medical attention because security forces, who have launched a major counterterrorism operation in the area, have been preventing medical staff and ambulances from reaching them.

The fact as it stands is that no one really knows whether there are wounded people in the building, no one knows if they exist or whether or not they are innocent civilians caught in the fighting or militants wounded in clashes with security forces. No one is sure how to get to the building or the vicinity simply because it is infested with booby trapped bombs and terrorist sharp shooters hiding at critical points shooting at whoever tries to approach the area.

The HDP deputies taking advantage of Turkish democracy are making a scene every day in Parliament, claiming the state is brutal and that it is abandoning these "desperate" wounded people. Three HDP deputies have launched a hunger strike in protest. HDP deputy Faysal Sarıyıldız, who represents the region, has been misleading everyone for several weeks. He has given distorted information to the officials and has directed them to wrong addresses about the location of the wounded.

The government on the other hand is going to pains trying to understand the real situation and explain it to the public while mobilizing all its resources to get to the "wounded" persons.

The outcome is sad. Turkish authorities have sent ambulances to get to the area but have not been able to enter the place where the wounded are allegedly holed up, simply because they have been confronted with booby trapped ditches and barricades.

The HDP has been told to convince whoever is tending to the wounded to bring them at least close to the ambulances, but that has not materialized.

So security forces have been sent to the region with armed vehicles to get to the wounded but they have been met with a barrage of heavy fire and in the ensuing clashes at least five security force members have been killed.

The HDP show continues and the state continues to save the "wounded." It is a farce. The Turkish people are questioning the merits of trying to save these wounded people when the HDP and the PKK terrorist organization is making every effort to continue the charade and keep international attention on Cizre. If they really care for the wounded they would stop the charade and try to save lives instead of playing a game based on human suffering.

It is time someone asked HDP deputies to end this game and stop misleading the world. It is clear that they want to use all the benefits of Turkey's parliamentary democracy to enhance the secessionist cause of the PKK terrorist organization. It is clear that their participation in Turkish democratic life is to exploit the benefits and create a separate Kurdish state. The Turkish people have now understood their real intentions as well as some HDP deputies within the fold who mean well but have been carried away with the secessionist tide. Can they really expect to be allowed to continue this fatal game without any repercussions?

This is no threat. It is merely stating the facts as they are and what to expect as a result.
Last Update: Feb 03, 2016 1:19 am
RELATED TOPICS