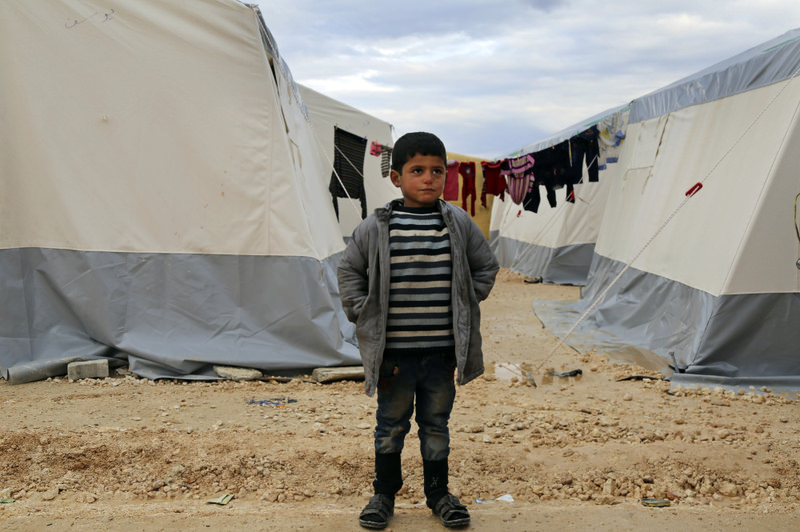 A Syrian boy standing at a temporary refugee camp built by Turkish aid group IHH for displaced Syrians in northern Syria, near the Bab al-Salameh border crossing with Turkey.
by İlnur Çevik Feb 10, 2016 12:00 am

As long as the puppet Assad regime sits on the throne in Syria, no measure, no good intention and no funds can stop the human catastrophe that has been increasingly ongoing in the country since 2011

The Russian occupation force in Syria continues its daily massacres, killing scores of civilians indiscriminately with deadly aerial attacks as the world and especially the United States and European Union - who preach supreme human values - simply look on. The Russians came to Syria to fight DAESH terrorists and yet since then they have been doing everything but combat the extremists as they continue their quest to bolster the Assad regime.

On the other side of the coin, Turkey provides shelter to the hundreds of thousands of Syrians who are fleeing the Russian massacres and are rushing to the Turkish border to find shelter. The latest attacks on the city of Aleppo have left more than 400,000 people homeless and most have started moving toward the Turkish border in a new wave of refugees.

Up to now, Turkey has provided shelter for 2.7 million people from Syria and spent $9 billion for their safekeeping. This is an incredible humanitarian effort unmatched anywhere else in the world. The international community on the other hand has only been able to provide $455 million to Turkey in the form of U.N. funds for refugees and the European Union is still trying to put together an aid package of 3 billion euros that will be spent to enhance the camps in Turkey and create new educational facilities for the 450,000 Syrian children who are among those who have fled their country because of Russian aggression.

German Chancellor Angela Merkel was in Turkey on Monday to discuss the issue of Syrians flooding out of the country, which we have to underline over and over again is the consequence of Russian aggression and brutality. She has said the EU will do everything it can to ease the burden on Turkey, which is fine. She said the Russians have also accepted the U.N.'s resolutions to avoid inflicting harm on the Syrian people. That too is fine. She says the 3-billion-euro aid package for the Syrians will be sent to Turkey promptly. That too is fine. She also says a 10-point plan will be put into force that will be used to slowdown the exodus of Syrians to Europe with Turkey's help. But we have to admit that Frau Merkel and all the other western leaders are simply beating about the bush as the real crux of the matter is the unchecked Russian aggression, which is continuing to add water to the flood coming out of Syria.

No measure, no good intention and no funds can stop the human tide of people fleeing in fear. As long as there is a swamp in Syria created by the puppet Assad regime, the Russians and the Iranian mercenaries will continue fleeing their country and no person, no force or no measures will be able to dissuade them that there is a worse fate for them in Europe than death.

Turkey has done its part better than any country in its position could have done. We have seen and noted the past examples all over the world. Turkey is continuing to do its part to provide shelter and comfort to the Syrians and will continue to do so. But what do we do about the Russians? Who will stop their aggression? They came to Syria to fight terrorism and yet since then all they have done is terrorize the civilians of Syria.

The Russians destroy, kill and force people out of their homes as they turn Syria into their own territory. Turkey builds and provides comfort and shelter. Can this be sustained forever? This is the question President Barack Obama, Frau Merkel and their colleagues have to answer in earnest.
RELATED TOPICS