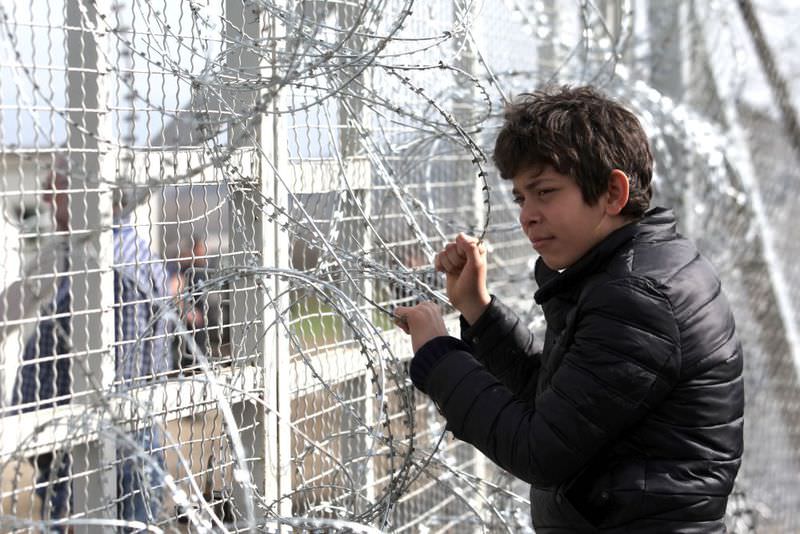 A boy yesterday looks through the barbed wire as migrants and refugees wait to cross the Greece-Macedonia border near the village of Idomeni.
by İlnur Çevik Mar 02, 2016 12:00 am

The tragic events in a "jungle camp" in Calais, France and at the border dividing Greece and Macedonia shows what is install for Europe as the European Union countries bicker on how they should deal with an exodus of migrants from war zones and areas where people suffer other hardships.

The EU countries will hold a summit with Turkish Prime Minister Ahmet Davutoğlu early March on how to cope with the influx of refugees who either have left Syria and who are trying to head for Europe or who will soon be pouring out of Syrian war zone as the Assad regime instigated violence continues with the help of the Russians and Iranians.

France has started to evict migrants in a makeshift camp called "the jungle" and move them into official quarters while the migrants are trying to stay put and find ways to get to the port of Calais and find their way to Britain across the channel. On Monday and Tuesday the migrants have battled French security forces.

On the other side of southern Europe Syrian migrants have battled Greek and Macedonian police as they tried to push their way into Macedonia in a quest to reach deeper into the northern parts of Europe through the Balkans.

All these show the urgency of the matter that Europe has to get its act together to deal with a massive migrant's crisis that looms in the horizon.

Turkey has got more than its fair share of Syrian migrants as it hosts nearly three million refugees having spent 9 billion dollars for them. Turkey has provided the best facilities and services for the migrants unmatched anywhere else in the world but says there is a limit to what more it can do. German Chancellor Angela Merkel has acknowledged that Turkey has done all it can do and needs assistance to sustain the current level of services for the refugees as she does not see an immediate end to the conflict in Syria that will help the migrants to go back home. She has led an EU move to provide Turkey 3 billion Euros to help cope with the challenges of the Syrian migrant problem where people need added services and educate their children as their stay in turkey will clearly be a long one.

However, Merkel's positive stance does not seem to be shared by quite a few leaders of the EU countries who do not see the fact that if the migrant issue explodes it will engulf Europe as a whole and no one will be spared of the chaos.

Besides this some Europeans feel migrants from other parts of the world are using the Syrian issue to slip into Europe and say they will not allow this. That is why the Germans say Syrians will be given the priority to be provided with shelter but the problem is how you effectively identify who is a Syrian when these people have no identification and travel documents.

Turkey on its part says letting in Syrians and providing them with shelter is a humanitarian issue yet it does not solve the real issue that the swamp created by the Syrian civil war instigated by the Assad regime and fueled with the help of Moscow and Tehran has to be dealt with. The swamp has to be dried so that the core reason of people fleeing their homes has to be dried up. So it calls on the European leaders to get their acts together and make a real effort to face the challenges of the Syrian conflict and push all the concerned parties to stop fighting and help to find a solution to create a new Syria.

Indecisiveness and inactivity in Europe is only inviting the migrant crisis to deepen and threaten the whole continent. Turkey is there to help but wants action on all fronts including a real effort by Europe to end the Syrian civil war.
Last Update: Mar 02, 2016 1:35 am
RELATED TOPICS