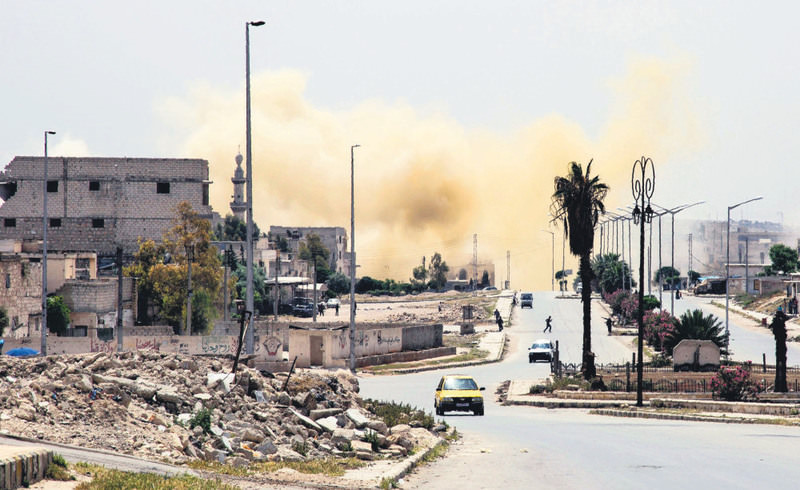 Smoke rising on a main road in the Salaheddin neighborhood of Syria's northern city of Aleppo following a reported airstrike.
by İlnur Çevik Apr 26, 2016 12:00 am

The PKK is imitating the strategies adopted by its Syrian wing PYD in the Middle East. However, Turkey is not Syria and Syria is not Turkey

The fact that the PKK is working together with Syria's Kurdish Democratic Union Party (PYD) has started to create serious problems for Syrian Kurds, something they never bargained for.

Syrian Kurds were a part of the PKK apparatus in the Qandil Mountains in Northern Iraq for the past three decades. They had several militants in the PKK and were involved in terrorist activities in Turkey. Later when the Syrian civil war erupted, the Syrian Kurdish wing of the PKK decided to exploit the volatile situation in northern Syria and thus left Qandil and moved into the region to start their campaign to carve up the area for the PKK. They killed their Syrian Kurdish rivals, pacified all the Syrian Kurdish adversaries and drove those Kurds who did not want to think like them into Turkey.

They dominated northern Syria with the PYD and set up the so-called People's Protection Units (YPG), which was the military wing of the set up.

At first all went well with them. The PKK saw its PYD flourish in northern Syria. Then the Americans used the PYD as a fighting force against DAESH and then the Syrian Kurdish militants lived through a period of glory as they were given U.S.-made weapons. Then came the Russians who added support to the PYD. The PYD, however, did not only fight DAESH but concentrated more on the Turkmens and the Arab opposition to the Assad. They used U.S. and Russian arms to push the Arabs and the Turkmens from their homes and force them to flee to Turkey.

However, the PYD never calculated that the PKK would become greedy and try to replicate what the PYD is doing in northern Syria and that it would try to carve up cities and towns inside Turkey to create Kurdish enclaves or even cantons. That was a foolish act for which the PKK is now paying a very high price.

The PKK stashed arms inside cities and towns in southeastern Turkey over the past four years as it pretended to support the peace and reconciliation process started by President Recep Tayyip Erdoğan when he was prime minister. Then when the ruling Justice and Democracy Party (AK Party) suffered a setback in the polls, the PKK decided the time was ripe to launch their new uprising thus carving up several towns and districts in the cities of southeastern Turkey where they had amassed arms.

The PKK's terrorist activities created a massive counter-offensive where the Turkish military and police force started engaging PKK terrorists street by street and weeded them out from cities and towns. The cost was high as Turkey suffered more than 400 military and police casualties. But the PKK received blow after blow and lost 5,000 militants in the campaign.

The more the Turkish forces killed PKK terrorists the more the PKK demanded the PYD send reinforcements. This put the PYD in a tough spot as they too were in need of militants to fight against DEASH as well as the Turkmens and other forces in northern Syria.

Young people who wanted to enlist for the PKK did not want to be a part of the PYD forces fighting in northern Syria... So both the PKK and PYD face a serious dilemma. So much so for the ambitious project of the Americans to have a land fighting force against DAESH.

So the Americans can now see how they have sown the seeds of evil at our doorstep. Are they really our allies?
Last Update: Apr 26, 2016 1:36 am
RELATED TOPICS