Thanks to HDP, Turkish nationalists are alive and well 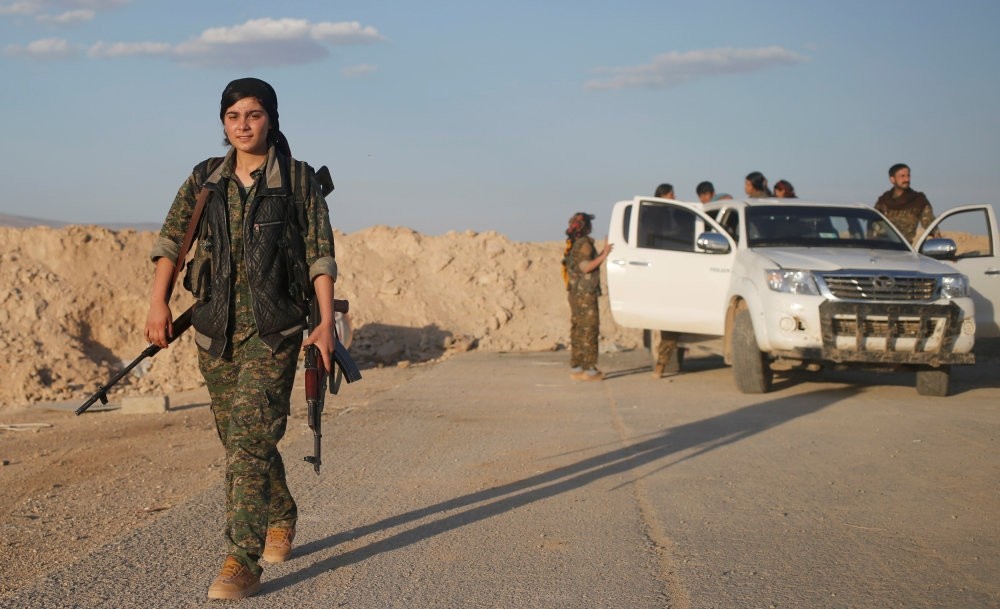 A female member of the Sinjar Resistance Units (YBS), a militia affiliated with the PKK, carrying a sniper and an AK-47 rifle in the village of Umm al-Dhiban, Northern Iraq.
by İlnur Çevik Jun 07, 2016 12:00 am

By acting as the political wing of the PKK terrorist organization in Parliament, the HDP paves the way for increased Turkish nationalism

Once again Kurdish nationalist Peoples' Democratic Party (HDP) Co-Chair Selahattin Demirtaş has opened his mouth and made a futile attempt to mislead Turkey's Kurds, trying to justify the terrible performance of his party that brought Turkey to the brink of division.

Sunday, he spoke on the anniversary of a terrorist bombing in the southeastern provincial capital of Diyarbakır and charged that "Kurdish enmity is being created to bolster Turkish nationalist feelings."

He seems to suggest that the ruling Justice and Development Party (AK Party) and President Recep Tayyip Erdoğan are fanning anti-Kurdish sentiment to strengthen Turkish nationalist sentiments and thus consolidate their conservative support.

This is absolute rubbish. The HDP and its leader Demirtaş have performed terribly since the June 7 elections. They have openly supported the terrorist campaign of the PKK in eastern and southeastern Turkey, they have tried to justify PKK attempts to create Kurdish enclaves and turn them into "liberated zones" that they would eventually turn into a mini-state. They have supported and encouraged secession. They have tried to drum up support for secession in Europe and the United States. They have done everything to justify that they are not interested in being present in Parliament to further the rights and freedoms of our citizens of Kurdish origin but that they are there to exploit parliamentary privileges to bolster the secessionist cause by helping the PKK in every way possible to by using their immunities as deputies to transport arms and explosives in their vehicles, attend funerals of not only PKK terrorist leaders but also suicide bomb attackers that killed dozens of people in the heart of Ankara.

Which Western society would tolerate such a performance?

Selahattin Demirtaş should not be concerned with the AK Party or President Erdoğan. They have kept their cool and have only intervened when things got out of hand since the PKK sabotaged the peace and reconciliation process. Until then Erdoğan and the AK Party gave them the benefit of the doubt and tried to keep the process on course despite provocation by Demirtaş, the HDP and the PKK. The HDP and PKK toyed with them and in the end showed their real face, hence the current mess in southeastern Turkey.

Demirtaş should not be concerned with the ultraconservative Nationalist Movement Party (MHP) led by Devlet Bahçeli. He too has performed exceedingly well and made the extra effort to keep the nationalist youth, known as "ülkücü," off the streets and thus prevent any clashes with Kurdish nationalists.

But we have bad news for Demirtaş and unfortunately for all of Turkey.

There is a strong opposition movement within the MHP to topple Bahçeli and install maverick Meral Akşener as party chairwoman. Akşener is being supported by some leading Istanbul businessmen who hate Erdoğan and the Gülen criminal organization that wants to topple the current government. Akşener has recently said it was a great mistake to keep the ultraconservative Turkish youth off the streets and criticized Bahçeli for doing this. So she wants to push the Turkish nationalist youngsters into the streets and combat the pro-PKK people... That smells of civil war doesn't it?

It is well-known that the PKK is also supported by the Gülen crime gang simply to destabilize Turkey and thus hurt Erdoğan and the AK Party... So Demirtaş should see where the real threat lies and should be more interested in telling his comrades in the Gülen gang that what they are doing is a prescription for havoc. He is barking up the wrong tree... Besides if Turkish nationalism is on the rise it is thanks to people like Demirtaş, his colleagues in the HDP and the PKK...
RELATED TOPICS