All that PKK does is sharpen our resolve! 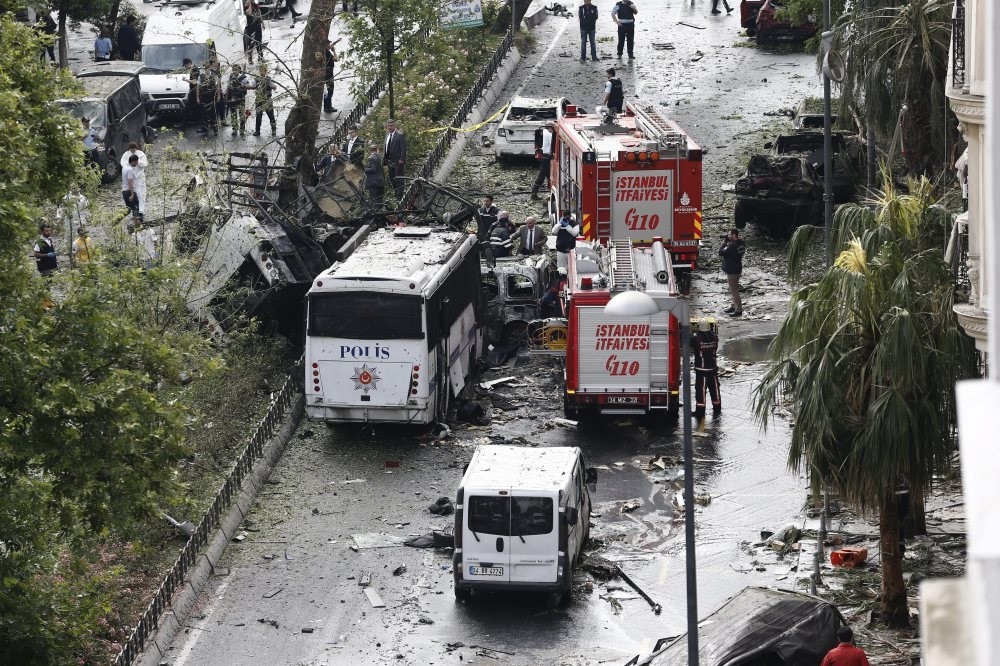 Police officers inspecting the area after a bomb attack yesterday on a police bus, killing 12 and wounding 42 in Istanbul's Vezneciler district.
by İlnur Çevik Jun 08, 2016 12:00 am

The bomb attack on Tuesday in Istanbul has all the makings of a PKK attack. The PKK attack has killed seven policemen and four civilians and wounded scores of others in the heart of this historic city once again, displaying the ugly face of the PKK and the fact that it has no respect for human life.

Is this attack a surprise? Not at all. The PKK has been receiving blow after blow from Turkey's security forces in southeastern Turkey in cities and towns.

Its hideouts are being discovered in urban areas as well as rural areas. Its depots where the terrorists have stashed weapons, food and medical supplies are being captured.

The PKK tried to carry its secessionist war into the cities and towns of southeastern Turkey in Diyarbakır, Mardin, Şırnak, Nusaybin, Cizre, İdil, Silopi, Lice and Yüksekova and took a serious bashing at the hands of Turkish security forces and village guards. They tried to create an uprising, setting up barricades, digging hedges and planting bombs in them, building underground tunnels yet all these failed dismally as local people refused to cooperate with the terrorists. The outcome was a massive defeat for the PKK in the urban areas. They lost at least 6,000 militants in the process.

In the rural areas Turkey has also started dealing heavy blows to the PKK while Turkish Air Force jets have been hammering PKK strongholds in the Qandil Mountains of Northern Iraq where the PKK leadership is holed up.

Under the light of all these setbacks, the PKK had to do something to give the image that it is alive and well and unfortunately they selected Istanbul for this meaningless display.

A cowardly executed bomb attack in Istanbul does not prove anything except that the PKK remains a blood-thirsty terrorist organization. It does not show the PKK to be strong or that it is capable of coping with the Turkish security forces. What the PKK does also further sharpens the will of the Turkish government to fight to the bitter end to finish off all the remnants of the PKK. It also unites the Turkish masses around the government in its fight against the PKK.

What is sad is that such incidents also turn the Turkish public attention to the backers of the PKK and unfortunately many Turks regard the United States as the arch supporter of this terrorist organization.

Every time we have a PKK bomb in Ankara or Istanbul we find out later that the source of the attacks were in northern Syria. The Syrian Kurdish organizations like the Democratic Union Party (PYD) and the People's Protection Units (YPG) which are armed by the Americans are the extensions of the PKK in Syria.

We have observed sadly that the PYD has been giving open support to the PKK terrorists waging their secessionist armed campaign in Turkey. The PYD provides the PKK with arms, explosives and training facilities in northern Syria. The PKK bombers are trained in places like Kobani in northern Syria, which ironically Turkey helped to save from the hands of DAESH killers. A PYD sharp-shooter was caught in Turkey recently. The PYD has also sent reinforcements to the PKK who have suffered serious losses in Turkey.

The Turkish public is aware of the American support for the PYD and hence the PKK. Turks find it difficult to digest the fact that our ally is actually helping the PYD. No wonder there is growing anti-American sentiment in Turkey.
RELATED TOPICS