US should enlist PYD help in Orlando 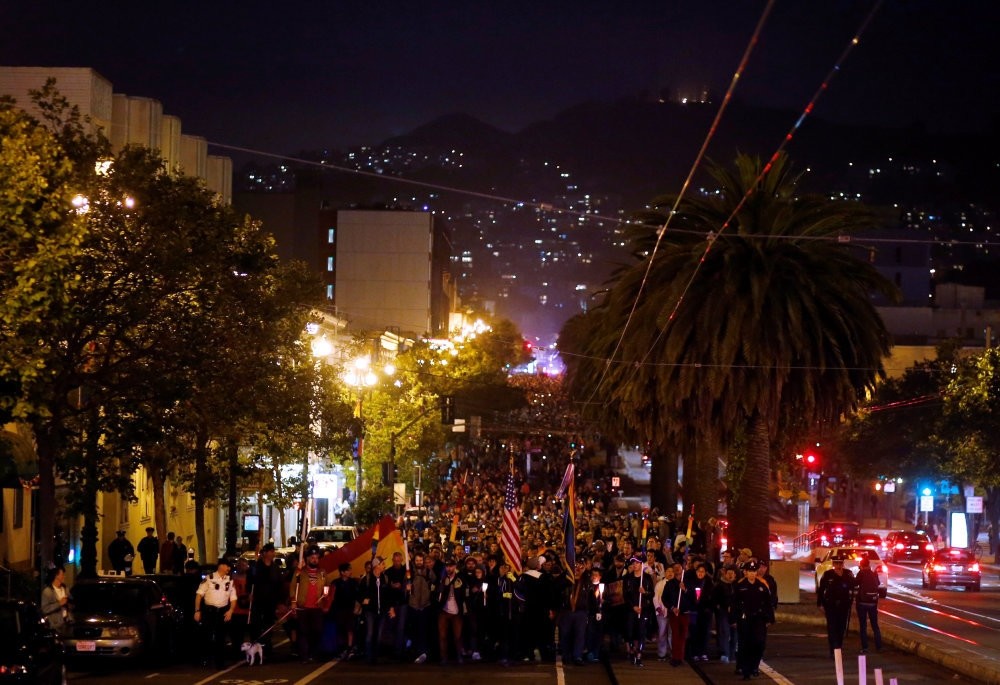 People marching down Market Street during a candlelight vigil for the victims of the Orlando attack on a gay nightclub, held in San Franciso on June 12, 2016.
by İlnur Çevik Jun 14, 2016 12:00 am

The U.S. should have paid heed to Ankara's warnings about the danger of the PYD, which is pretending to be a member of the anti-DAESH coalition

So finally DAESH terrorism has reached the United States. A 29-year-old lone terrorist, who declared he was a member of DAESH terrorist organization, massacred 50 people and wounded 53 others at an Orlando nightclub in what is described as the worst mass shooting in the country.

They too suffered at the hands of DAESH terrorists who targeted citizens of the Republic of Turkey in capital Ankara, Istanbul and in the southeast. They too suffered at the hands of PKK terrorists, who have launched suicide bomb attacks in Istanbul and Ankara and have incidentally been armed and trained by the Democratic Union Party (PYD) in northern Syria, who are actively aided by the U.S.

President Recep Tayyip Erdoğan consistently warned all Western powers to stand firm and cooperate against all forms of terrorism and especially watch themselves against DAESH attacks. He consistently said, today DAESH is attacking Turkey, next it will attack Brussels or some other Western capital. So DAESH has attacked Paris, Brussels and now Orlando.

Yet it is sad that while the U.S. actively mourned the DAESH attacks in Brussels and Paris, even lowering their flags to half-mast, we observed with great sadness that Washington did not do the same when DAESH killed dozens of our citizens in terrorist attacks.

This is what President Erdoğan has complained about from the very start and he has been accused of anti-Western rhetoric and even cooperating with DAESH.

Turkey has done more than any other country in the world to combat DAESH and that is only natural as DAESH has land in Iraq and Syria, just next door to Turkey. Turkey has denied entry to 40,000 foreigners from the West suspecting that they might be members of DAESH. Turkey deported several suspected DAESH militants and informed the host governments of its actions. Yet a terrorist deported to Belgium was set free by authorities and the same person was among those who launched the bloody killings in Brussels.

Turkey has always told the U.S. that it is still missing the broad picture when it gives massive support to the Syrian Kurdish PYD and the People's Protection Units (YPG), which are the affiliates of the PKK terrorist organization. The U.S. has been providing training and military equipment to the PYD and YPG to fight DAESH forces in Syria. The U.S. has turned its back on Turkey saying the PYD is a necessary component of the fight against DAESH. Turkey has opposed this as the PYD has provided militants and arms to the PKK, which in turn has used these in its terrorist campaign inside Turkey.

However, when it comes to a meaningful international struggle against DAESH, the Americans as well as the European Union are in desperate need of Turkey's cooperation. Now many people in Ankara are grumbling: "Let the PYD and YPG help the Americans to prevent another Orlando..." Can anyone blame them?
RELATED TOPICS