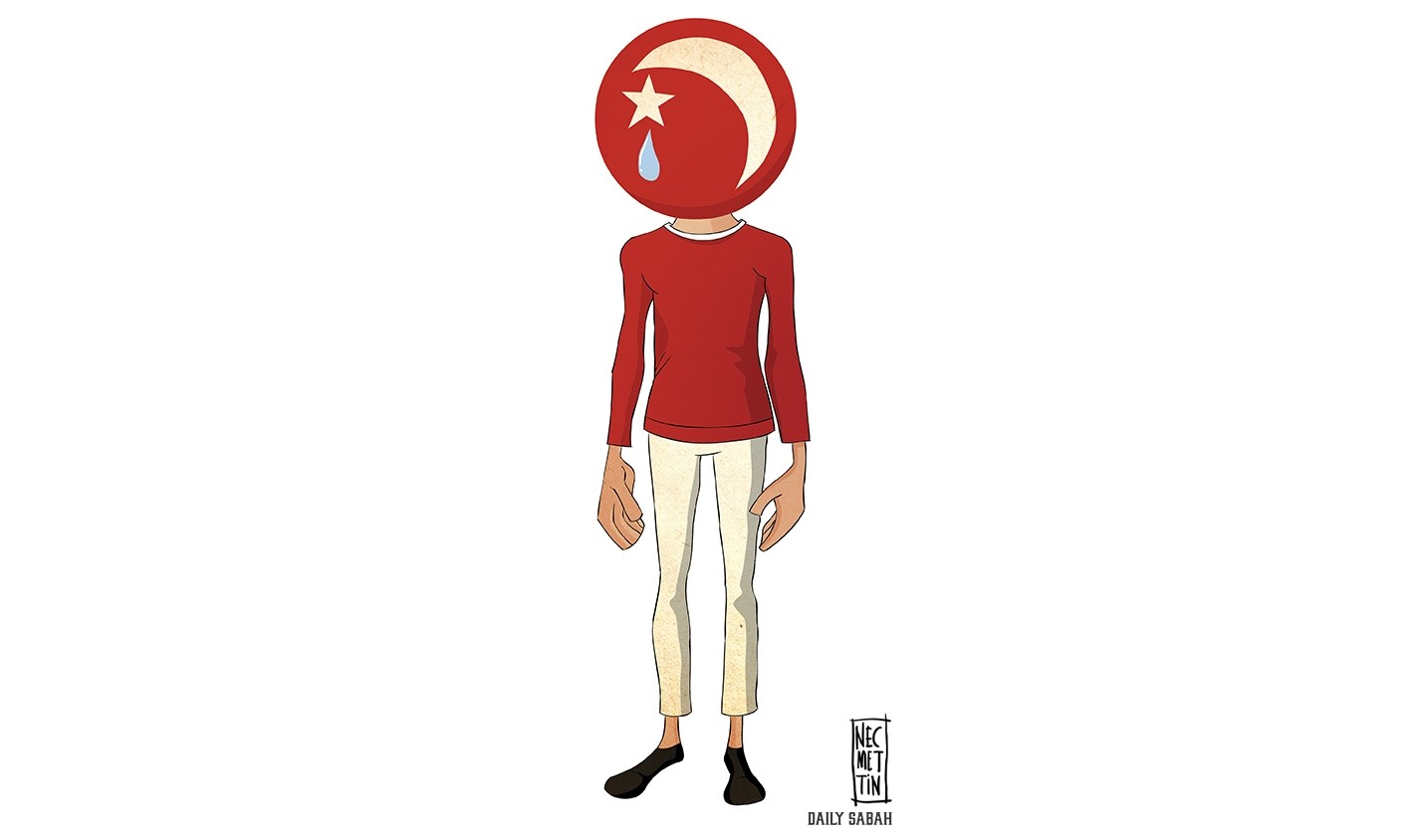 Illustration by Necmettin Asma - twitter.com/necmettinasma
by İlnur Çevik
Jun 30, 2016 12:00 am

DAESH sees Turkey and Erdoğan's Islamic understanding, which peacefully embraces all, as a great obstacle to attain its dream, and that is why it carried out a deadly terrorist attack at Istanbul's Atatürk airport on Tuesday

The terrorist attack at Atatürk International Airport in Istanbul, which killed 41 people and wounded more than 190, is a clear message by the radical DAESH organization that they regard Turkey and President Recep Tayyip Erdoğan as their arch enemy and will not hesitate to go to every extreme to counter them.

Why is this so?

It is simply because Erdoğan and Turkey are the champions of true Islamic values, which are peace, compassion, mercy and superior human values like love for human beings as they are all the creations of God. DAESH is aware that these are dangerous values that challenge its existence and thus see Turkey and Erdoğan as the main obstacles for its quest to tarnish the good name of Islam with their crooked religious beliefs.

That is why while DAESH has launched attacks in France and Belgium, it has repeatedly hit Turkey over and over in Ankara and Istanbul. DAESH has been launching missiles at the southeastern border city of Kilis, killing dozens of civilians. So those who claimed Turkey and Erdoğan were supporting DAESH should now see that they were making a great mistake and should apologize.

It should come as no surprise to anyone that the attack in Istanbul by three suicide bombers came just as Turkey announced an agreement to mend fences with Israel and took steps to make amends with Russia over the downing of a Russian jet fighter by Turkey near the Syrian border.

It is no secret that DAESH is concerned that improved relations between Turkey and Israel could have fatal consequences for the terrorist organization. DAESH has recently started threatening Israel, which has been a wakeup call for the Jewish state. At first, DAESH may seem an advantage for the Israelis as it is a destabilizing factor for Arab countries in the Middle East, but instability in Iraq and Syria does not mean this will provide safety and security for the Israelis.

Turkish intelligence and Mossad could well cooperate against DAESH and give Ankara an upper hand in its fight against the terrorists.

Now with improving ties between Ankara and Moscow, we could also see cooperation between Turkey and Russia against DAESH in Syria.

So with all these positive developments, DAESH seems to have decided to hit back at Turkey and serve notice that it will not bow so easily.

We see that the sources of terrorism that are hurting Turkey are all based in the failed states of Iraq and Syria. This means effective steps have to be taken to dry up the mires in Syria and Iraq. If this swamp is not dealt with, Turkey will not be the only country that will suffer at the hands of terrorists. DAESH terrorism has already reached France and Belgium and has a potential of reaching all European capitals and even the U.S.

So it is high time the international community started seeing the reality in Syria and Iraq and started taking steps to end the mess in both countries. This means concerted militant action in both countries and it means international cooperation. Yet unfortunately we do not see any sincere effort to secure this. All we see are messages of half-hearted condolences and commiserations.