The world should not be fooled by Gülen's theatrics 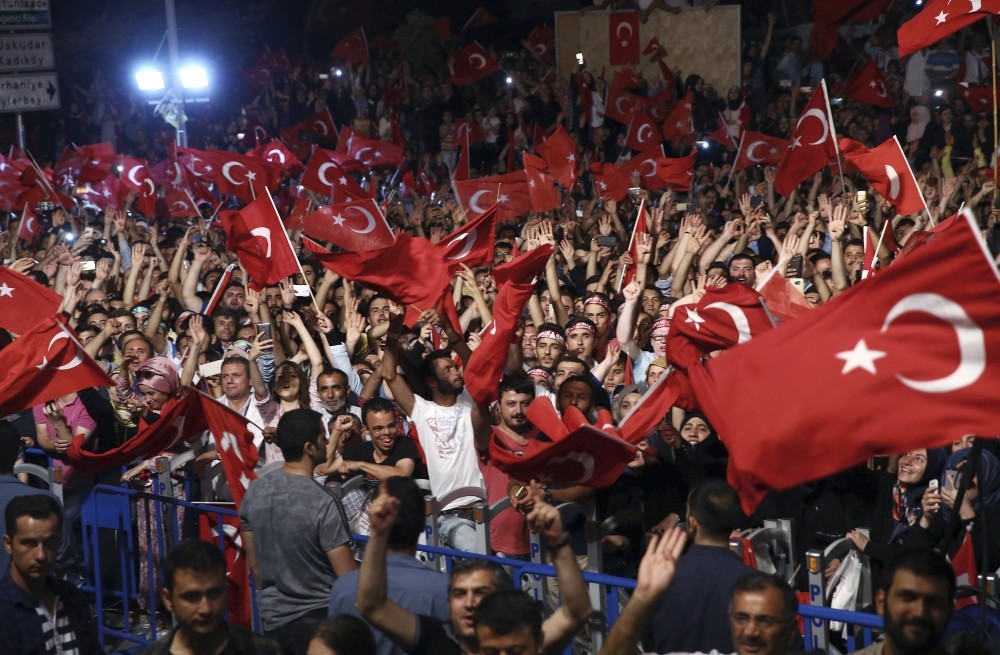 People listening to President Erdou011fan as he addresses them in front of his residence in Istanbul, July 19.
by İlnur Çevik Jul 20, 2016 12:00 am

Do not fall for Gülen's theatrics, as he gives the image of a beaten down, old and sick man. We fell for them in the past and look what happened to us

Once upon a time, many devout Muslim Turks used to listen to Fethullah Gülen emotionally preaching on TV, sobbing at times. He was a showman like many of the American televangelists who milk the masses and amass huge funds.

Then time went by and the military forced him into exile during the 1997 military clampdown that forced elected Prime Minister Necmettin Erbakan out of office and installed a military-engineered government.

In 2002, when Recep Tayyip Erdoğan became prime minister, circumventing the military's created obstacles with the newly founded Justice and Development Party (AK Party), sweeping to power, Gülen's people started using their pro-Islamic advantage to befriend Erdoğan and started installing their supporters in key places in the state apparatus. They gradually infiltrated the police force, judiciary and all the sensitive departments in the state dealing with communications, personnel, finance and logistics. Eventually, they started taking over the state. At that time they had also started infiltrating the military, sending their young supporters to military schools as a long-term plan. This was a sinister move to eventually depose the elected government and grab power. No one realized the sinister motives of the Gülen Movement and treated them as moderate Islamists who meant well and wanted to educate the masses at home and abroad.

They set up schools all around the world, even in the most remote corners, educated the sons and daughters of influential people in these countries and eventually started businesses and won favors, further enhancing their power bases in all corners of the world.

In 2007, the military once again tried to intervene in politics to prevent Erdoğan from electing Abdullah Gül as president because he was a devout Muslim and his wife wore a headscarf. Erdoğan called snap elections and won a landslide victory and forced the military back into their barracks, dealing them a humiliating blow.

However, apparently that was exactly what the Gülen Movement was waiting for. They beat the daylights out of the military as they fabricated evidence and launched the notorious Ergenekon trial where top-level military officials as well as several intellectuals were imprisoned on the pretext that they were plotting a coup. They added another case called Balyoz (Sledgehammer) that was also another alleged plot to toppled Erdoğan. Yes, it is true that in 2004 some military officials were actually plotting a military takeover and so the prosecutors, judges and police affiliated to the Gülen Movement exploited this to do away with some key generals and eventually replace them with their own diehard soldiers.

It is suspected that the U.S. provided the Gülen Movement with some of the evidence through CIA surveillance of the generals that was distributed to the media.

The two cases caused great devastation in the military ranks, and Gülenists managed to slip into important posts. Later, when Gülen started his moves openly to depose Erdoğan by imprisoning the National Intelligence Organization (MİT) chief Hakan Fidan in 2013 with the help of his prosecutors, judges and police it all became crystal clear that Gülenists were out to get not only the government and Erdoğan, but also his family. The events unfolded after that.

Gülenists viciously attacked and the Erdoğan administration counterattacked. It was a war of attrition. Gülen failed in every sphere and became a wanted man in Turkey.

Hence the coup attempt on Friday. The generals, officers and even cadets who were affiliated to the Gülen Movement were ordered to stage a coup and use every means, including killing people, to finish the job. It was the deadliest and bloodiest coup attempt Turkey has ever had. They used jets and helicopters to bomb their own people. They used tanks to crush their own people.

So U.S. President Barack Obama, when you tell us to provide proof of Gülen's involvement in the coup, it really shocks us. Did you and do you seek any such evidence when you use your drones to kill suspects in Afghanistan or in northern Syria? Were you so meticulous when you sent people to Guantanamo? Gülen has tried in the past and is still trying to topple Erdoğan. Will you be a part of this crime?

Do not fall for Gülen's theatrics, as he gives the image of a beaten down, old and sick man. We fell for those theatrics in the past and look what happened to us.
RELATED TOPICS