Can you say 'yes, but they are the French?' 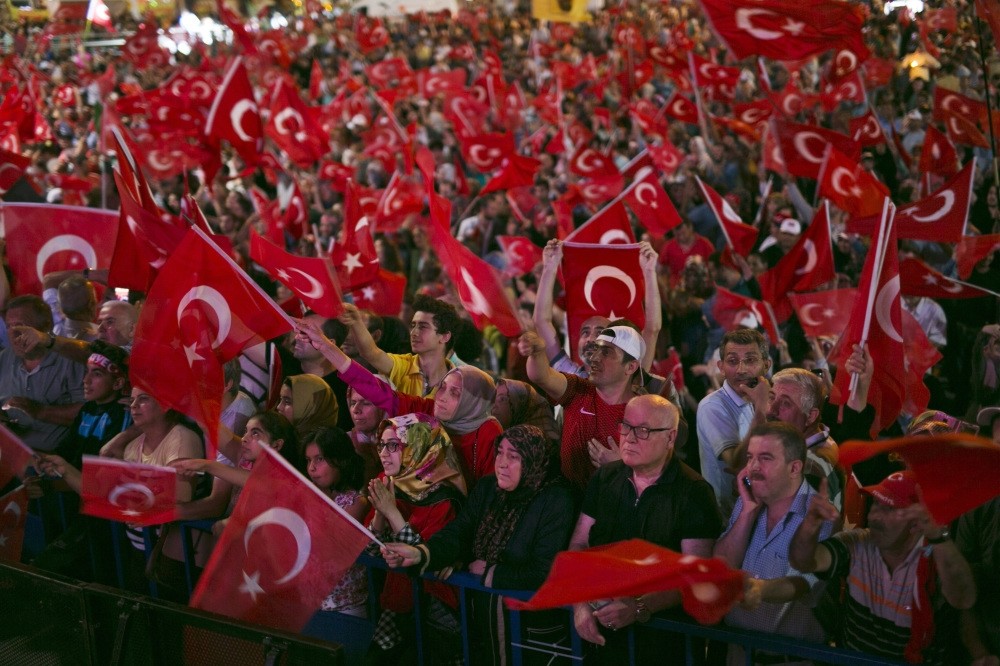 People waving their national flags as they shout slogans during a demonstration against the failed July 15 coup attempt, in Istanbul, July 20.
by İlnur Çevik Jul 22, 2016 12:00 am

While not saying anything at all to France's declaring another six months state of emergency, it's interesting to see some Western media outlets criticizing Turkey's declaration of state of emergency following the failed coup attempt by Gülenist terrorists

President Recep Tayyip Erdoğan announced early Thursday that the government has decided to declare a state of emergency for three months pending parliamentary approval after the failed coup to overthrow the government and install a junta run by former cleric Fethullah Gülen and his band of murderers.

We are observing that some people in the West are up in arms voicing strong anxiety and deep alarm that Turkey is moving away from democracy and supreme values. We are sorry to say that we were shocked to see their lack of active support when the rebel coup plotters were rolling their tanks over the people, when the people flocked into the streets to defend democracy for their government and the Parliament they had elected with their votes, were the target of rebel bullets and when the rebel jet fighters and helicopter gunships attacked them.

One would have expected the European Union and the United States to say they are proud of being allied to such a country whose people are prepared to brave bullets, tanks, jets and helicopter gunships to defend their votes and their democracy. In fact the EU should have said the Turks have proved their loyalty to democratic values and that they are worthy of being part of their community.

None of this was said or done. On the contrary now that Turkey will be run by a state of emergency they are only trying to stall a country that has emerged from a massive trauma called "the bloodiest and most barbaric coup attempt" in Turkish history.

If a democratic country like Turkey has been subjected to such an act of treason by some of its soldiers, if a band of hardened commandos try to kill the elected president and his family, if plans have been found of killing all the state officials, if a Parliament has been bombed by missiles fired from jet fighters and some sections have been turned into rubble, if the cleric who staged the coup has infiltrated all the key state offices and sensitive command centers and in a sinister manner installed his followers over the years, then what do you do? As extraordinary conditions necessitate the declaration of extraordinary measures you opt for a civilian solution called "state of emergency."

Of course, there will be a crackdown against all the members of the Gülen terrorist gang who have over the years infiltrated the state, the ministries, the Armed Forces, the police and the judiciary. These are threats to the state and to the survival of our nation. Or would the U.S. and the EU expect us to present them with flowers and give them a raise and thank them for trying to kill us and destroy our democracy? Why don't you do that to the terrorists who wreaked havoc in Paris, Nice and Brussels?

The French have opted for such a solution after their country came under a mere terrorist attack in Paris, which is nothing compared with the bloody coup attempt that we have suffered. They were about to relax their state of emergency recently but the attack in Nice, where a lone man plunged a lorry into people, forced them to shelve rights and freedoms for another six months to cope with the threat. Can this be compared to the disaster we went through in Turkey last Friday?

Can anyone really say "yes but they are the French and they can rule with a state of emergency more responsibly than you can?" We have seen how the French have acted in some parts of Africa in modern times and the atrocities they are responsible for. We have seen what they are capable of. Instead we have carried compassion, affection and cooperation to Africa and won the hearts of the people.

So can anyone "who means well" and has "a bit of regard for our well-being" say some kind of extraordinary measure is not needed to cope with the extraordinary situation created by the coup attempt?
RELATED TOPICS